Can I install laminate next to tile without using T-moulding?

I'm installing laminate flooring in a bedroom next to a tiled hallway. I'm planning to have a standard expansion gap all the way around the room, but I'm stuck on how to do the doorway. I know the standard approach is to use T-moulding, but whoever did the original floors in my house just used a thin metal divider between the engineered hardwood floors and the tile. I'd like to be able to install the laminate the same way without a gap for just the length of the doorway. The room is 10' x 11'. Am I going to run into problems?

I haven't noticed any expansion issues with the engineered hardwood floors, and they seem to be blocked in on several sides by these transitions. The living room has a 17' wide section with no expansion gap between doorways on either side. If it matters, the house is on a slab. 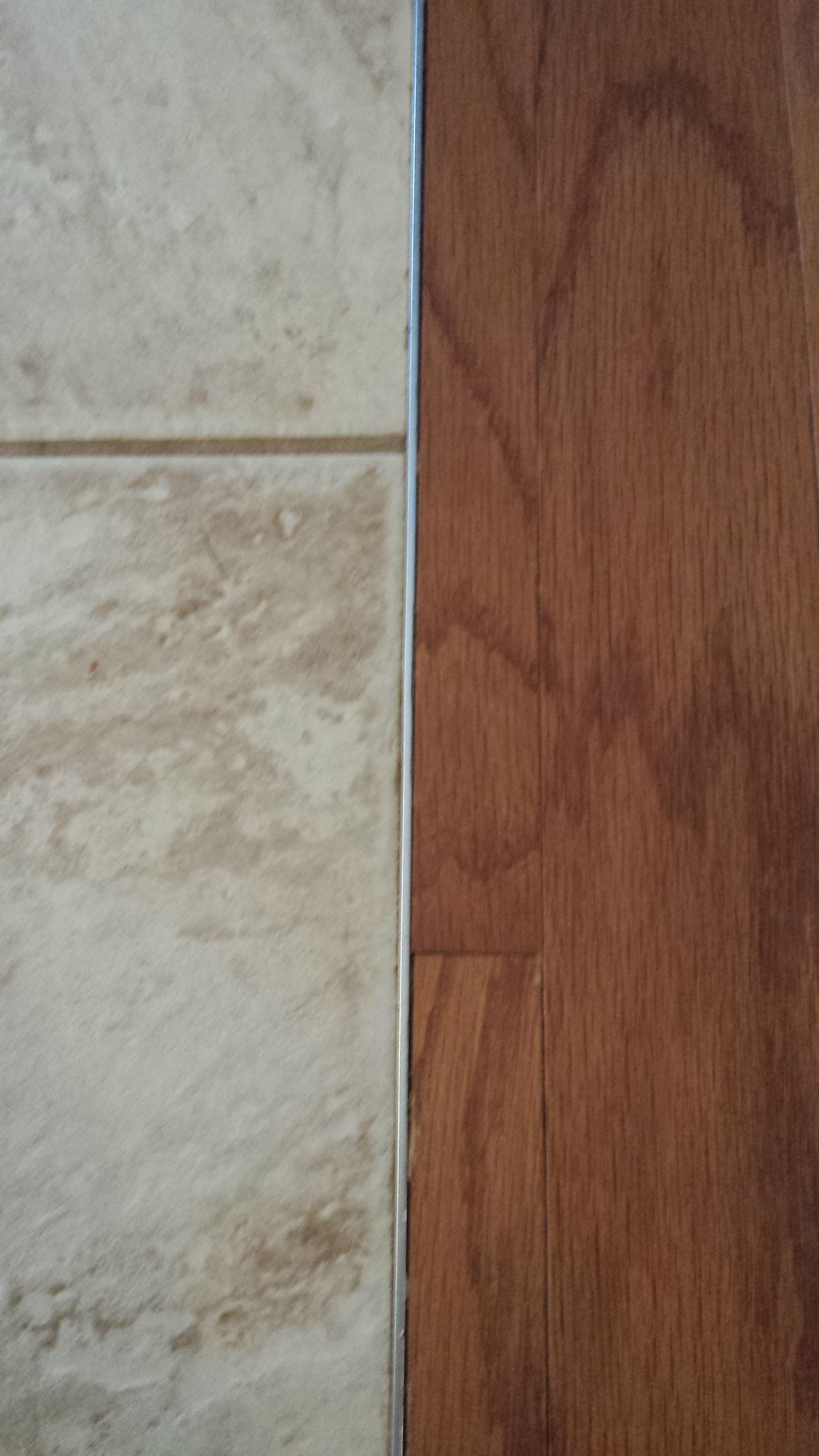 Manufacturers require expansion around the entire perimeter of your floating floor. Depends on whether or not you want to maintain your warranty. If you don't care, fly at er. You may or may not end up with issues. Depending on the height of the tile, I like to use an Edge Mold which butts up to the tile instead of overlapping it. It still overlaps the laminate, offering a warranty approved solution. Last week I had to deny a warranty claim by a builder who butted all his floating engineered hardwood tight to tile. The flooring started to squeak a couple months after completion. Badly. Sorry "builder". He was out a substantial sum. Your 10x11 room may survive unscathed.

You could leave a very small expansion gap.. 1/8, then fill that with a color matched flexible caulk, pergo makes color matches to each floor they sell, I'm sure other brands do aswell.. then you can avoid transitions, and still leave expansion gap, however your still going to void warranty, the gap won't be enough to honor the warranty, but it's enough to avoid problems in the future (in my opinion) I'm sure your project is done, but maybe this can help others in future projects (for the record, I would always recommend transitions)

Well, it's been over a year with no expansion issues or buckling at all, so it looks like I got away with no expansion gap in front of the door. Note that this may not be the case for all installations, but it was for mine.

Some other factors that I imagine played a role:

As RossInstalls mentioned, I did void my warranty by installing this manner, but I was fairly confident I wouldn't run into problems, mainly due to the middle point I list above.

9
Laminating hallway with opposing doorways - how to tackle the last piece/row having undercut the architrave & door frames?
4
Should I run laminate continuously through rooms, or separate with T moulding?
3
Should I remove and replace base trim or install quarter round when installing laminate flooring?
2
Laminate flooring without molding?
1
Should I use transitions with laminate flooring to control the size of plank needed at each wall?
1
Help with transition between rooms using hardwood and laminate flooring
2
Am I required to install expansion joints at all interior doorways for Pergo?
1
pick thickness of the engineered wood planks