What good storage rack or furniture are there? What considerations should I have to build one?

The furniture should have space for a 24' or 32' TV, the consoles (in a comfortable manner so that I can play any of them without having them archived) and cartridge storage. Do you know of any such furnitures available?

What good storage racks do you know? What considerations should I have to build such a furniture?

Turn a 2x4 Ikea Expedit bookcase on its side. Add more units if you need more storage. It's deep enough to easily hold up to a 60" or so TV on top.

I'd say go for the ones with the varying sized cubby holes, but I guess they're not on the website anymore.

You can also get handy little boxes that fit into the holes, so that your actual games are tucked away.

If you build your own, or have someone build one for you, I would suggest the following:

How about something like this? I'm not sure where the original picture came from, but it doesn't look that hard to construct. If you're handy with a saw, it should be fairly easy to make. 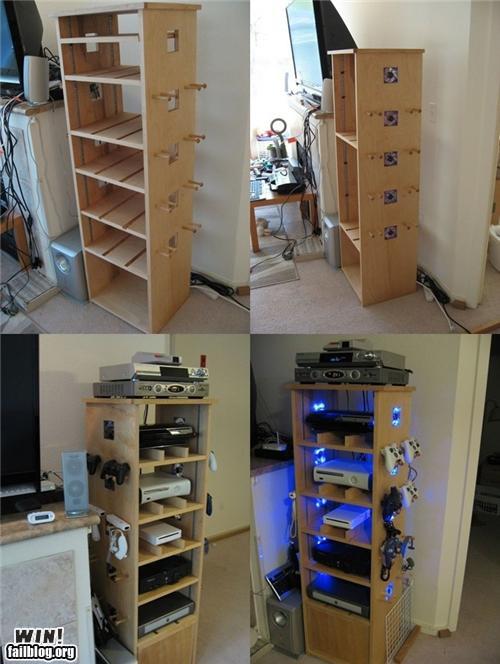 From looking at the tower, I'd say you'll need the following tools to replicate it exactly:

and one of the following options:

If you don't mind so much about replicating it exactly, (no fancy inset track for adjusting shelves, no cooling fan ports, and using screws to assemble rather than dado joints) you could probably get away with using just a circular saw and a drill.

Hear me out on this - working up a plan for my house.

Although no where near the amount of consoles as you have, i have the 3 current (ps3, wii and 360) - tack on an apple tv2, dvr and PC (for various movie reasons) and the fireplace mantal is getting a bit crowded- it spans the width of the room; brick fireplace in the middle flanked by a built in bookshelf on each side.

so i'm gonna gut the entire thing; granite over the fireplace - leave the tv in place on top of the mantal and on the left hand side will go a 19 inch network rack.

4 post shelve's aren't terribly expensive (the rack is, but i have 2 from gutting an office) - cover with oak panels and doors and she can have a bookshelf on the other side for books and pictures.

the rack is a good idea IMO because the shelves are adjustable; slits cut in for ventilation; will hold any console you can put on it (some of them are rated for 85lb) as well as any AV equipment you have

put a rack mounted network switch in there for the newer consoles and leviton (or amp, forget) makes patch panels with jacks that have rca / hdmi connections in them.

hell, score a rack mounted power distro block (Amp) and leave them all plugged in. go crazy and get a APC UPS - but those are pretty loud (by far the majority of the noise in my server room)

its gonna cost more than anything u can even think about getting from ikea or the like so this is gonna be a bit on the more extreme side.

I admit, I have an old school CRT TV (and let's face it, LCDs aren't the greatest for gaming, anyway), on a set of wire shelves. I can relatively easily get to all of the connections behind, use the shelving itself as something to tie cables down to, have a shelf above the TV for stuff I access all the time (eg, DVD player), and stuff down below for most of the game machines, UPS, computer, audio, PVR, satellite receiver, etc)

(I say 'most' game machines, as I keep the N64, NES and Intellivision stored away so they don't get too dusty ... so I guess that might be a consideration with the open shelf approach ... although, I don't need to worry as much about an overheating xbox360 ... but I've still had to have it serviced)

Not the answer you're looking for? Browse other questions tagged storage or ask your own question.

4
What should I keep in mind for attic storage solutions for a small home with 14" rafter spacing?
6
What do I need to use one winch motor independently on several different cables (for overhead storage)?
5
What are the proper materials and method to hang heavy-duty shelves in a garage for storage?
2
What features should I look for in a small wooden shed for tool storage?
4
What are watertight storage solutions to protect objects from flood water?