3 way circuit options to indicate if circuit is active [duplicate]

I've got a couple switches controlling an exterior light which is not directly visible from either switch. That causes issues if, for instance, I am leaving during daylight hours and know I will be returning after dark and want to have the light on. I need to flip the switch and then check to see if the light is on (or check, then switch) which is inconvenient (there's a similar issue checking to turn if off during daylight hours).

Ideally, I'd like to use something like the Lutron dimmer system where tapping the top always turns it on and tapping the bottom always turns it off. I don't need a dimmer function so I'd rather not pay for one. Alternatively, switches that had an LED indicator to show when the circuit is energized would work. Are there any products available that would provide either feature? For various not-very good reasons, mostly having to do with laziness, I don't want to use a motion sensor or light sensor and just leave it "on" permanently.

Using a Z-Wave, Insteon or similar type of "smart" switch would be the simplest way, as just requires replacing the two existing switches. Expect $50-70 per switch. The is the closet thing I'm aware of that's an off-the-shelf solution to your problem.

You could also run a new wire between the two switches, to provide a switched return line that could power an indicator light. I don't know what the situation is like if it's feasible to run a line or worth the effort. Quick search finds some "3-way pilot light" switches that would work. Just to be clear, these require 4 conductors between the two 3-way switches rather than the usual 3.

You could also use a 120V panel-mount indicator light. You'd need to expand to a 2-gang box and custom mount the indicator in a blank faceplate.

Yet another option would be to build a current-sensing light circuit: basically, a current ring on the power line that is capable of sensing the light being on, and in turn, lights up a LED. This would require a custom circuit (though you can find lots of examples on the internet), a transformer to get the ~5VDC (or whatever you use for the circuit), and space to mount all of this stuff (you can't/shouldn't just mount a circuit board inside an enclosure that has 120V in it, it needs to be in a separate enclosure -- offhand I'm not sure if this is part of NEC, but if not it's just common sense). 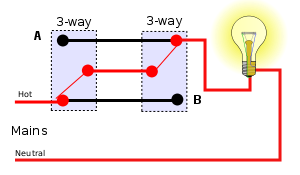 If terminal A is hot then the lamp is on. And on the other side terminal B is always hot and ready to power an indicator light.

6
How to add indicator on a light switch to indicate the outdoor 3-way light is on?

4
What could cause flashing LED lights when other LED lights in a different room are turned on?
0
Should I be switching just the hot, or both hot and neutral?
1
Can't turn off security light permenantly
2
Why would my dimmer switch only dim lights about halfway?
0
Two switches, two lights, one light always on.
1
Three-way switch puzzle
0
How to reset the breaker on this smart dimmer light switch (switched receptacle)?
2
wiring of occupancy switch in 3-way situation (odd-looking instructions)