Are my outlets unsafe?

Some (but not all) of the electrical outlets in my kitchen look like this: 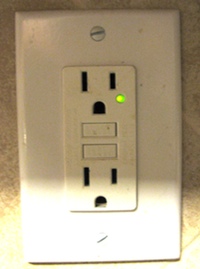 (I don't know what this kind of outlet is called.)

One of those outlets is where I plug in my toaster oven. In the last 6 months, I've had two toaster ovens die (become unusable at any outlet) while plugged in there. The first time, the toaster oven was old, but the second time it was a new one of a reputable brand. Also, the LED at that outlet is now off, pushing the buttons does nothing, and the outlet provides no power.

I have only a vague idea that these outlets have circuit breakers for safety. It seems like the one with the LED out needs repair. But I'm concerned about the significance of the toaster dying. Should I be worried about my wiring? Might I have a safety issue here?

No. A toaster oven is (mostly) just a resister. You'd have to see a large surge to kill a toaster oven. I don't think any other electrical malfunction would kill it.

Your outlet is probably fine, and I think you're suffering from bad luck.

I wonder if the voltage in your house is too high and causing the toaster ovens to burn out. You can check the voltage with a multimeter or a device like a Kill-a-watt meter, which is also useful for checking power consumption.

In the US, the nominal voltage is 120V, give or take some tolerance. I would say anything over 125V is probably worth looking into (you could call your electric company for more information about what the voltage should be in your area).

If you did have a voltage problem in your house, you would probably notice old-fashioned incandescent bulbs burning out faster as well (if you still have any, replace them with with LEDs!).

I don't know whether you own the property or not but there are these devices that you plug into the outlet that have a color code to let you know if you have any faults with that outlet (as in problems with the wiring). See if this will help, otherwise call an electrician. 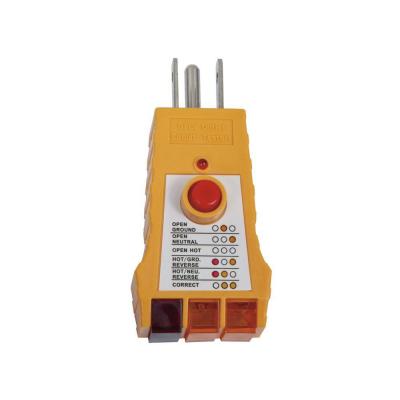 The above is for a GFCI tester which is the type of outlet you have a picture of. They are cheap and very easy to read. The one above is about $8, and a new GFCI usually runs around $12.

5
Toaster oven makes my kitchen lights flicker
4
Should I proactively replace old GFCI outlets?
4
What are the relationships between ground and arc protection in breakers and in outlets?
0
My “smart toaster” recently started tripping the circuit/fuse… Advice please
1
Electric outlet not working
1
Outlet trips GFCI and Circuit Breaker. Help!
0
GFCI outlet trips from any heating element
20
My room lights' brightness pulses when I turn on my toaster oven
1
How do I diagnose an open circuit where several outlets are not working?