How to remove glue from ceiling

I removed a ceiling of plaster panels and found that on the original concrete ceiling there is a glue residue of some glued-on styrofoam tiles. (See picture) 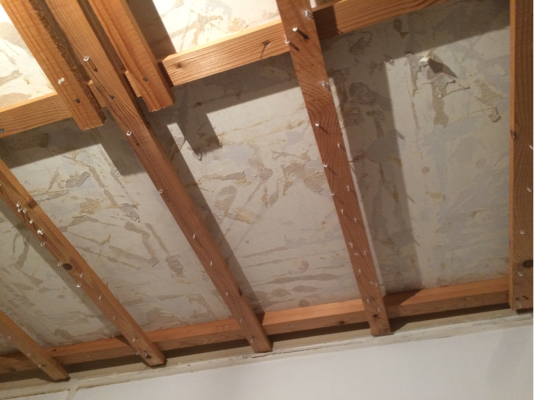 Before I get the plastering redone, I have to remove this residue. Are there like special glue removers for this type of work?

I would recommend that you reuse the furring. Here is my reasoning

Essentially, you have a 'service cavity'. You can place low profile can lights, electrical wiring, etc in this space. I'd keep it if it is secure.

How to remove construction adhesive from concrete?

Is there any other reason it is furred-out (electric runs, ect.)? It looks like someone tried to scrape a little, gave up and furred it. At the state it's currently in, I'm guessing your trying to see if this is a possibility or whether you are going to have to reuse the furring strips also. I see a few options:

I would suggest trying some of the linked suggestions before you pull down the furring. Anything besides just reusing them isn't going to be fun.

6
How to remove construction adhesive from concrete?

1
How do I mount a ceiling box in 4" thick ceiling?
6
How do I safely get glue off of wood that's to be stained?
1
What type of glue sticks to tiles?
4
What glue should I use for glue-down engineered flooring installation?
0
How to apply wallpaper over styrofoam?
1
Covering a creepy old tile ceiling
0
Drywall over Ceiling tiles and Plaster Ceiling
1
What can be sprayed over ceiling mastic?
3
Should I remove old wood glue before reinstalling a board on a table, and how?