How to design unit with 3 bedrooms, 2 bathrooms, 1 laundry, 1 kitchen and 1 living room that has very open space? [closed]

I want to design my unit that has very open space for the living room. I also want to have a big kitchen.

The unit should have 3 bedrooms, 2 bathrooms, 1 laundry, 1 kitchen and 1 living room.

Here is what I designed my unit, but I am not sure it is the best design. 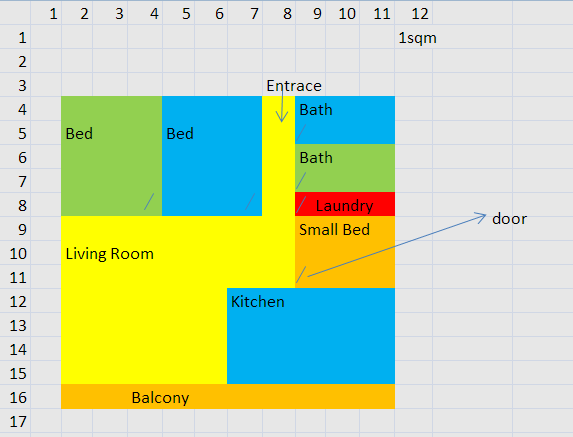 In the picture, each cell represent 1 sqm. The entrance is at the back of the unit. There is a balcony but no enstrace in the front of the unit

Can u come up different design for my unit?

"Can you come up with a different design?"

Many. Enough that it isn't worth describing any one of them.

That's an endless topic, but I can suggest a few starting points:

Think about how you're actually going to use the space, for everything from large parties to quiet times to needing to get away from each other.

Think about how much time you're going to spend where, what furnishings are going to go where, and what that says about how space should be distributed.

Think about traffic patterns, and make things as convenient as possible.

Think about whether some of these functions can share some of their floor space -- eg, if the laundry room can be combined into one of the baths or the kitchen, that may free up space to be used for other purposes. Plumbing work may be cheaper if most of the things which use water are close to each other (sharing a "wet wall", for example).

And so on. And on. And on. There's no single best answer to any of these questions. If you're designing, you need to work through all the tradeoffs, look at lots of other designs for ideas, and generally spend time drawing up alternatives until you find one you're satisfied with.

Remember that non-loadbearing walls can be added or ripped out later, and even things like plumbing can be relocated to some extent. Doing so may not be cheap, but you do have that option if you decide you've really made a serious mistake.

Not the answer you're looking for? Browse other questions tagged design or ask your own question.