I'm installing a Aquarite chlorinator, and something went terribly wrong!

But when I flipper the timer manual switch to ON, I immediately got a loud BANG from the Aquarite cabinet, and it flipped the 60A breaker dedicated to the pump/timer/chlorinator as well as the 60A breaker behind it in the main panel.

The timer and pump appear unscathed by the ordeal, but the main circuit board of the Aquarite shows significant damage to at least the two red MOVs on either side of the terminal block (you can see the pieces and smoke in the photo below).

So, what did I do wrong? As far as I know, the circuit is 110V, not 220, and the instructions explicitly told me to connect the controller to the load side of the timer so it would not be running while the pump is off.

In the photo below, I wired red to hot (timer load), and black to neutral (unswitched). The corresponding wires in the breaker box are black and white, respectively.

UPDATE: Idiot electrician did not label the breaker as 220V. Idiot me assumed it was 110V. So that was the problem. Just confirmed with voltmeter.

You've already sorted this out, but the lesson here is simple: Don't ever assume anything.

Determining 220 vs 110 at the panel is fairly simple. You have a phase A and B in your house, which come from each side of the transformer. The transformer is center-tapped to ground, and this is your neutral wire.

In your breaker panel, every other row of breakers is a different phase. 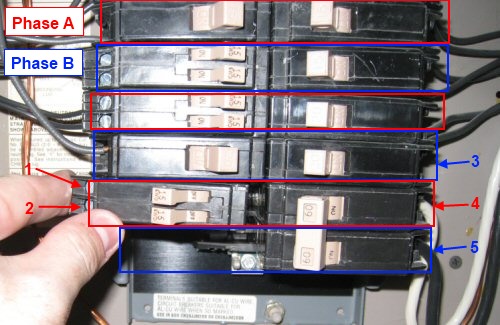 To get 110V power, you need a neutral wire, and a hot wire from either phase A or B (it doesn't matter which). So any single breaker, like #3, is only supplying 110V power.

This picture also includes some tandem breakers (the one currently being installed is a tandem), in which case both circuits are on the same phase. That is, both #1 and #2 are on phase A. If you measure the voltage (potential difference) between #1 and #2, you'll get 0V.

Note though, it's against code to use single circuit breakers to run a 220V circuit, since if the power trips, you want all the power to trip, not just one side (since that would leave 110V hot).

The other huge tip-off at the circuit is the wire colors (though again, never assume, always test). There aren't a ton of requirements for wire colors, other than two: white means neutral, green (or bare) means ground. If you use a white wire for something other than neutral (common in a light switch, for example), it must be indicated on both sides, usually by wrapping a piece of red or black tape around it. Black is hot.

The next most common color is red, which has two very typical meanings: * switched, which you'll commonly see in duplex receptacles where one is constant, and one is controlled by a switch * hot for 220V, which is the case here, where red is the opposite phase from black, to provide 220V.

Not the answer you're looking for? Browse other questions tagged electrical pool or ask your own question.

0
How to check a Quick connect control power transformer is working?
2
Adjacent light circuit is inadvertently controlled by four-way switch wiring
2
Need help with correct wiring when replacing a hardwired smoke detector
2
Confused by apparent shorting damage at side and back terminals
0
Wiring a 220v pump with 2 hots to a controller
2
Options for Replacing T101 Rotary Timer With Switch
2
If my heat pump does not have a neutral, do I still need a neutral wire?
1
Wiring Pool Subpanel for Pump and Receptacles
1
Fixing an outdoor light: what did go wrong and how to fix it?
1
four way switch to three way for vent fan