We recently replaced an existing fireplace mantel and my wife would like me to re-purpose the old mantle as a high mounted shelf in our soon to be occupied nursery.

The original install was a 1x1 tonailed into the drywall and occasionally a stud. Very flimsy.

The mantel is 5' long and is a frame with a hollow space that appears to accommodate a 2x3 ( 2" high, 3" deep). In order to use that I would have to drill through the long side of the 2x3 and run lag bolts into the studs. This would seem to create a pretty long lever that could snap a bolt. I'll only be able to attach to 3 studs.

Is this a standard method of hanging mantels?

Would I be better off just attaching a 2x2 to the studs, then cut and mount some 1x2 angle pieces to the 2x2? That would seem to spread the load out more evenly and not put as much cantilever force on the bolts 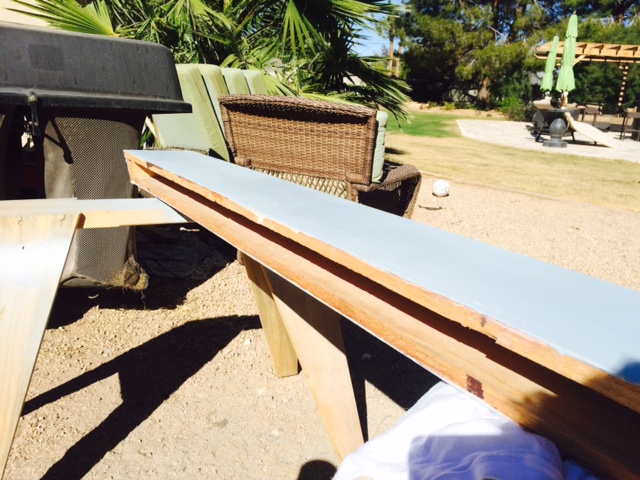 If you use long enough lags to get a good bite into the stud, your first proposed method should be fine. If the "lever" action is high enough to snap a lag bolt, then it will be strong enough to snap the 2x3 as well.

From a strength perspective, it doesn't matter how long the lag bolt is - the torque and shear at the junction of the wall/bracket interface is all that matters. It doesn't matter if the lag bolt sticks out 3" from the wall, or if just the bracket sticks out 3" from the wall. You get the same torque applied from the same downward force if you assume the lag/bracket/mantel assembly is one rigid body. And if it's not, then something internal in the shelf has already failed, and you don't need to worry about the torque loading on the lag at the wall.

If you wanted to use shorter lags for some reason, you could always countersink them by drilling into the 2x3 with a bit larger than the lag head.

Not the answer you're looking for? Browse other questions tagged wood walls shelving hanging or ask your own question.

16
How can I hang a shelf with no visible fasteners?
0
How to build floating shelving?
2
How can I hang this Moroccan Tray?
1
How to hang a shelf in an invisible manner?
2
Can I use knee bracing to cantilever a deck further than code allows?
2
Lag bolt vs structural screw (and length) for TV mount