How to bore a hole from inside the crawlspace?

I need to drop some conduit in my crawlspace and run it under the brick skirting in order to install some conduit. Once outside the skirting, I plan to rent a trencher to do the majority of the run, but I'm having some trouble figuring out exactly how I can get from the crawlspace under the house to the trench I'll be cutting later. There isn't all that much room in the crawlspace - perhaps 36" vertical when positioned between the floor joists. Obviously the conventional posthole diggers (the powered kind) wouldn't work in this situation because of the lack of room to maneuver.

One thought I had was to use a garden bulb augur: 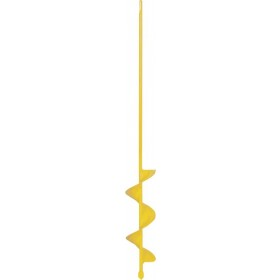 However, some of the reviews of these that I read described people trying to use them to dig holes in a non-gardening application like mine. Those reviews indicated that either the augurs or the drivers used to power them may strip or otherwise not be able successfully dig the hole.

Beyond this, I haven't thought of many alternatives.

Update: I tried the bulb augur idea and discovered, somewhat embarrassingly, that the brick skirting extends down below the surface at least 18" and very probably a good bit more than that. Busting out subterranean masonry under the foundation of a house is a bad idea, even if I could do it (and I'm pretty sure I can't).

@Craig's answer was right: I'm going to use an LB and run the fiber out the same hole being used by an outdoor power outlet. The fiber is a multimode 50/125 OM3. The bend radius is unspecified in the documentation for the cable, so I've contacted Tripp Lite's support to get that information. In the meantime, I found a comparable cable with a long-term radius of 5cm, and the LB will allow for that.

Also, on the augur itself: it performed admirably. I didn't have any trouble digging the hole it claims to be able to dig. It did bend at the chuck somewhat when I tried to ram it into the underground masonry, but that's pretty stiff abuse and I wouldn't expect it to do better than it did. Also, using a hammer driver was pretty important too, or the augur bit might have stripped. 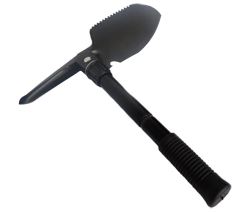 If you can dig a hole on both sides, inside and outside the crawlspace, maybe you could use that auger with the drill to punch a hole through to connect the holes, then run your conduit.

You could also potentially "drill" the hole with pressurized water, but that's less than desirable in your crawlspace.

I would certainly minimize the amount of excavation directly under the footing.

Not the answer you're looking for? Browse other questions tagged tools drill or ask your own question.

4
How can I bore a hole through a framing member, without causing a lot of damage to the wall covering?
6
How can I bore deep straight holes through wood?
2
How do I drill a hole flush (or nearly flush) against another surface?
2
How to drill straight hole in 4x8 beam?
1
What's the difference between a pilot hole and no pilot hole
0
Drilling a hole from both sides of the wall
0
How to enlarge lock hole (small mailbox)?
0
tapping a hole - how close does the drill bit have to be
1
Door bore hole too large for new door knob kits