Is there a good reason NOT to reuse the power cord when replacing my electric range/oven?

I'm going to replace my house's original 1970's electric stove (oven+range). I'm pretty sure the store is going to try to sell me a power cord for an extra $20, which isn't a big deal but I'd rather spend the money on something else if there's no safety concern. Assuming the old cord is still working fine and the insulation appears to be intact, is there a good reason why I should buy a new cord, vs. reusing the old stove's power cord?

A nearly 40 year old power cord is going to be nasty. Dust, grease, possibly cracked insulation internally, possibly asbestos insulation if the "original" cord was itself recycled. All are fine unless you disturb the cord. Pulling the stove out disturbs the cord.

Pulling out a stove is a fairly major operation, I would take the opportunity to completely clean under it and update whatever I could.

Changing the receptacle would be a decision based on it's current condition (one crack -> replace; any green copper -> replace) and the state of the wires. Open your breaker panel and check the stove wires (they'll be the biggest ones). Still soft and flexible? New receptacle.

A stove is your house's biggest power consumer. Maybe you don't mind a 40 year old cord handling all that power; how do you feel about a 60 year old cord? That's the old cord in another 20 years. If the original cord was recycled itself, it is now 60 years old and will be 80 when you retire.

A big reason: the old cord (and receptacle) may be obsolete and dangerous. 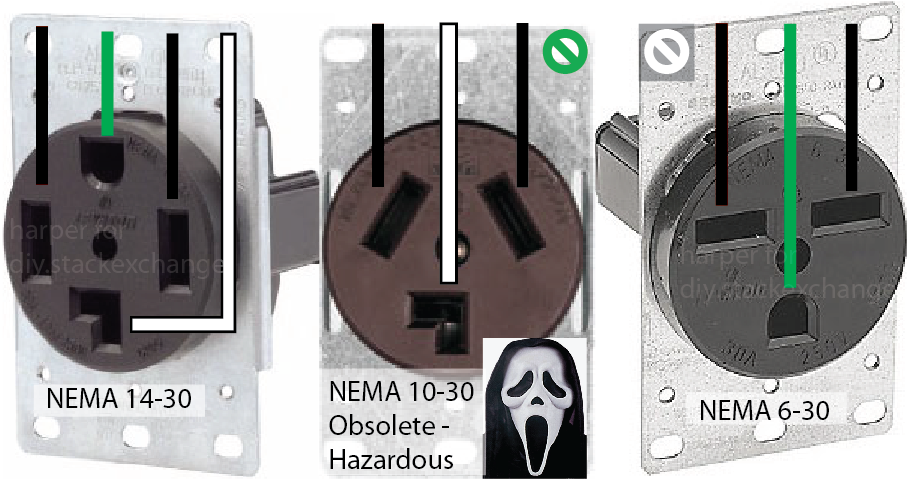 Your connectors will look slightly different, since they are probably -50 instead of -30, that number being the amp rating.

40 years ago, grounding was relatively new, and it was "par for the course" to fake up ground protection for stoves and dryers by using the neutral instead. Most existing houses didn't have grounds, just 3 wires, and forcing everyone to rewire would kill stove and dryer sales - not economically (politically) possible. The rationale was that neutral connects to ground in the main panel, and dryers and stoves are rarely unplugged.

The problem is, if that neutral connection is severed for any reason, the 120V loads in the stove (i.e. the oven light) will lift the neutral to 120V. The user will get shocked from a 120V leg, through the clock mechanism or bulb filament, through the user, to the sink or whatever they may be touching. People have died of this.

For many years, NEMA 14 has been mandatory in new work. NEMA 10 is still legal if your home already has one, to allow new stoves and dryers to be sold into older homes... obviously safety cannot be allowed to slow down appliance sales. Some cities override this.

Every new appliance is built to accept a NEMA 14 cord, or if necessary a NEMA 10. This is why they want to sell you a cord: they don't know which you need.

If it's NEMA 14, you're all set. If it's NEMA 10, it's worth popping the receptacle cover off and seeing if there are four wires. If there are, change to NEMA 14. Otherwise consider rewiring - it's legal to add only the ground wire, routed any practical route - it doesn't have to stay with the conductors.

No idea what your paying for the new range but I would think another $20 for a new cord would be a safe investment.

Just be sure to check your existing receptacle. Based on your stated age of you old range it is likely you only have a receptacle with 3 prongs. Two hots and a neutral but no ground. All codes and manufacturers now require grounds.

Be sure to read your warranty as it's possible the manufacturer's warranty will be voided if not properly grounded.

This will require not only that new $20 cord but new receptacle and 3 wire with ground from the receptacle to your breaker panel.

As long as nothing is burned or melted on the plug end, and provided it is appropriate for the application (amperage wise) you should be fine reusing the old cord.

Personally... New! Especially as you know it is at least 40 years old. Irrespective of how well things are looked after they degrade over time and I don't think I'd sleep well at night knowing there is a potential issue just waiting for the most inopportune moment to rear it's ugly head.

Not the answer you're looking for? Browse other questions tagged electrical appliances stove or ask your own question.

5
What is involved in installing a free-standing electric oven range?
5
Why does my stove vent fan take time to turn on
2
Why doesn't my dishwasher power on?
0
replacing a range outlet
0
Power cord for a electric range
4
How to hook up a new gas range with mismatched fittings, and meet all code requirements?
0
Mounting Electric range when stud is on the center line?
0
Can solder be used instead of quick disconnect terminals?