What does a novice DIY'er need to know before building a wall higher than 8' (14.5' feet to be exact)?

I came upon this question, but it is regarding industrial space:

Therefore, I am asking a new question that pertains to my residential situation.

The skinny: I want to frame a massive wall along my staircase. In the pic below, that whole area is going to be a new wall with exception to the doorway which is marked and obviously the entry way to the kitchen will still be open. I know that your typical wood stud frame is about 8' tall, so I don't know if I need to stack two frames or create 14.5'-tall frame. Don't laugh at me if that sounds utterly ridiculous. Remember, I am a novice DIY'er with ambitions.

So, before I decide to have contractors come out and provide estimates, I am wondering if this could be a DIY job. Therefore, what caveats do I need to be aware of before attempting this myself? What tools/materials should I have at my disposal?

It seems like I am going to have to build it along the existing staircase wall. If so, does the bottom plate need be fixed to the floor? Could I fasten the new frame to the existing wall? The ceiling is vaulted at probably a 45-degree angle, so how would the top plate need to be fastened to the beams along the ceiling? 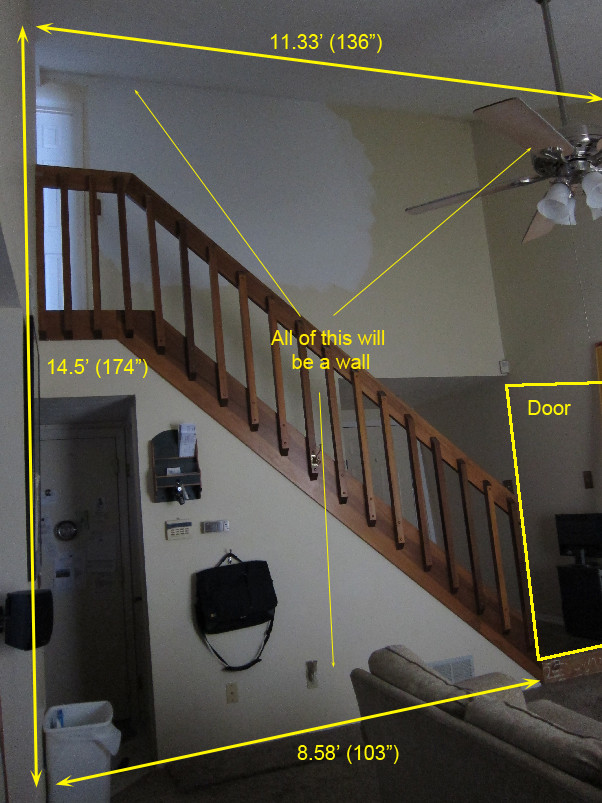 The right way to do this is to deconstruct the side and top of the stairway wall - remove the drywall, the stair railing, and the top plate for that wall, and then add additional studs.

Your two choices are balloon framing that runs all the way to the ceiling and platform framing that is two separate walls stacked on top of each other. For platform framing, you would need to tie the top/bottom plates to the left and right walls so it would not move. Balloon framing would avoid this, so that would be my choice. Make sure to put proper fire blocking in. The stairs may be hung on the current wall, so you will want to make sure you don't mess up the current wall's structure. You can do this by sistering the new studs next to the old ones.

This is a pretty straightforward thing to do.

I would not recommend adding a full wall next to the existing wall; you would have to modify the floor covering and extend any utilities out to the surface of the new wall.

It isn't loadbearing, so to some extent this is "Just do it."

I Am Not An Expert, but my semi-educated approach would be to frame it in a 6.5' section over an 8' section, or some such division... not least because that would make wallboarding it easiest, and it avoids having to buy and handle longer (more expensive and more awkward) lumber.

You'll have to open up ceiling and floor to attach the wall's top and bottom plates to the joists, and maybe some of the wall so you're attaching properly to studs.. Frame in the bottom as if it was an 8' wall with its own top plate with 8' studs 16"-on-center, toenailed at the bottom and nailed through at the top. Then that plate becomes the bottom plate of the next section, whose studs get toenailed top and bottom.

Remember to frame in the doorway when working on the lower section, of course.

(I'd be tempted to put a decorative window somewhere in this wall, just because I like 'em and because that tall a wall cries out for something to break it up visually... but that would complicate the framing, and you may have other plans for that surface. I'd feel more strongly about it if there were windows over that stairwell, to avoid losing as much natural light.)

Quick thought: If you can put a screen, or bookcases, or something (cardboard? blankets?), along the proposed line of the wall that'd be a way to live with it for a while and check that you really do want to do this. You might decide that the resulting traffic flow isn't optimal, or that this makes the living room feel too closed in, or something of that sort. Yes, a nonstructural wall can always be taken out again, but it's better to make sure you have a reasonably clear vision of what it will look like before you start. Among other things, this is going to impose additional limits on what can go up and down those stairs -- having had to fight a 7' sofa around the bends of a twisting staircase, I'd be nervous about having that narrow an approach to them from either direction. Even if there will be a high ceiling so you can tilt things on end.

(Personally, if I was modifying that space I'd be more likely to put in a landing at the top of the stairs, with a railing, looking down into the great room. But I assume you want the wall either because you're subdividing the house or trying to block airflow.)

Afterthought: Have you thought about lighting for the new stairwell corridor?

Second afterthought: Make VERY sure that the studs are as plumb, and in line with each other, as possible. Failing to do that will result in one part of the wall being tilted relative to the other, which may not look very good and be a pain to disguise.

Not the answer you're looking for? Browse other questions tagged walls framing or ask your own question.

2
How do you frame a wall around existing pipes and ducting?
4
How do I attach the framing of a shorter wall to a higher wall above concrete?
3
Can i leave existing drywall alone when adding two small walls to a finished basement?
1
Stud wall that doesn't connect to ceiling?
0
Knee Wall Without Top Plate
1
Framing a door ON stairs, 3 steps to landing?
0
Removing a wall to the ceiling / roof
4
Can I replace a window in a garage gable wall without adding a modern header?
2
How does framing a very tall non-structural wall differ from framing a standard height non-structural wall?
1
Any creative ideas for dealing with this long drop next to stairs?