How do I trace the cabling in a “Ring Main”

I have a "ring main" with many sockets on it, it is clear that it has been extended over the years.

How do I trace the cabling to.

I am hoping for a testing method that I can just apply “set by set”; assume I have access to a good quality resistance meter

Is there any software I can type all the resistance readings into that will “solve” the system and will then tell me:

Related but a much easier problem: Are there any “easy” ways to trace a home electrical system?

The issue I have with the standard test method and all current answers is that they assume that the sockets are connect in a single ring – I don’t know how they could detect for example two rings that have their ends joined just before the consumer unit. Or a spars that is connect to anther spars rather then directly connected to the ring.

The test in the wiring standard is very good at finding common errors like a wire that is not connected, or a live that is connected to a neutral; however the test seems to assume that the wiring is basically a valid single ring to start with. This is not a valid assumption on an old system you don’t know the history off!

if you can get your hands on a TDR (time domain reflectometer) you can use it to measure the distance to the end of the ring from an outlet.

i don't know if this is the right way, but here's what i came up with.

THIS HAS THE POTENTIAL TO BE AN EXTREMELY DANGEROUS PROCEDURE. DO NOT ATTEMPT UNLESS YOU HAVE THE PROPER TRAINING TO UNDERSTAND WHAT IS BEING DESCRIBED HERE.

once you have bridged an outlet, you can take resistance readings between hot and neutral. if you have one outlet that you can be fairly certain is the first or last outlet on the ring, you can use that as your bridged outlet, then figuring out the order of the ring is as simple as sorting the list by resistance. 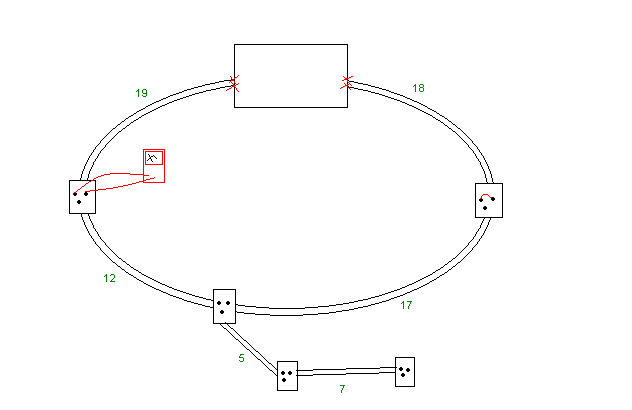 since none of the outlets on the spar are bridged, they will not affect the reading above.

the tricky part is identifying spars using this method. it might be obvious based on the resistance readings, but it might not be.

To work on complex house wiring in the UK you are required to be 'competent' and my feeling from your questions is that you are not and that you need to get a qualified electrician inspect the wiring.

I bought a decent book on house wiring with good diagrams and checked many website before attempting small jobs but still know that only a qualified electrician has the complete knowledge to test house circuits properly for faults.

Not the answer you're looking for? Browse other questions tagged electrical ring-main or ask your own question.

8
Are there any “easy” ways to trace a home electrical system?
6
What is a ring main?

28
How do I install a GFCI receptacle with two hot wires and common neutral?
1
How can I diagnose the cause of my washing machine shocking me?
1
Monitor blacks out when fridge turns on - bad power supply? Surge protection?
1
ring main/RCD max amps - confused (UK)
1
Does this wiring look normal? If so, how can I connect a porch light to it?
1
Testing electrical outlet wiring, arising from wikipedia
1
Safety of clamping two solid core wires in a ring circuit socket
2
How do I connect a high intensity infrared heater and thermostat?
0
How to test hot tub grounding
1
Wiring the Aeotec Heavy Duty Smart Switch