What does it mean if my Watchdog backup sump is flashing "Add Distilled Water" even with brand new battery?

I just went through the laborious process of setting up a replacement backup battery for the Basement Watchdog backup sump pump system. I had to pour the battery acid in myself. Now in addition to the expected "the charger is charging the battery," the "add distilled water to the battery" light is also on. I had understand that the distilled water is only needed from time to time to "top off" the battery. What does this mean? What should I do? 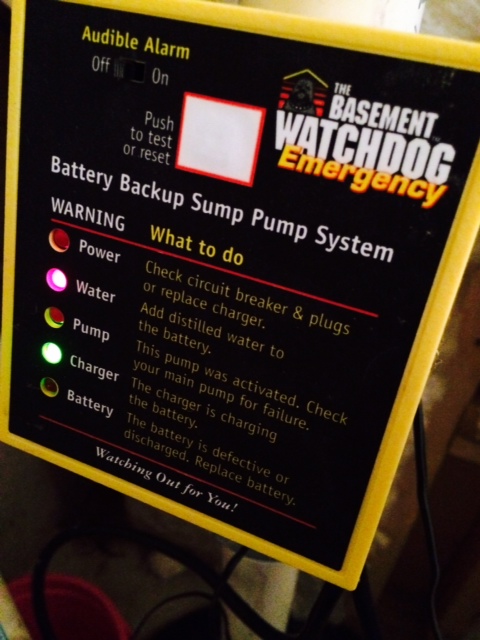 The unit in question has two large current-carrying wires which connect to the positive and negative terminals of the battery, and a sense wire which is designed to connect to a probe supplied with batteries manufactured by the same company. The probe is a thin metal rod that sticks through a special hole in the top of the battery; the hole is placed so as to ensure that the rod does not touch the plates in the battery (having a metal rod touch the plates could be spectacularly bad, so this feature should only be used on batteries that are designed for it), but the tip of the probe will sit in the acid solution; the acid is a good enough conductor that if it reaches the height of the probe it will effectively connect the probe to one of the battery terminals. If the charging box doesn't see that connection, it will flag a warning.

Note that a 12V battery consists of six independent two-volt batteries, each of which must be serviced separately. The probe only senses the level in one of the batteries, but if the batteries are all filled to the same level, they will generally lose water at the same rate. It would have been helpful IMHO if the unit had included probes for all six batteries and provided a means of reading their status, so as to make it easier to fill the batteries uniformly (otherwise it's hard to judge the fluid levels in them), but perhaps some other means of viewing fluid levels could have been usable.

In any case, I have a pump by that manufacturer and it worked successfully even through a 36-hour power outage coupled with heavy rain, so I'm pretty happy with it.

I had this exact same problem. I found the connection between the sensor rod and the wire was corroded. I replaced the connector and my problem was fixed.

It sounds like the yellow battery cell cap with the sensor is misplaced, as it should go in the second cell from the positive terminal. If it's on the wrong cell, move it and this warning should turn off.

Not the answer you're looking for? Browse other questions tagged sump-pump battery or ask your own question.