Can I use a cantilever TV mount the other way around?

I'd like to mount my TV above my fireplace, but I think it will be too high for prolonged watching.

So, I thought - could I use a cantilevered mount, but in the other orientation, so that the screen comes out and then down, instead of sideways? So that it ends up in front of the mantlepiece for viewing, but then stows back above the fireplace afterwards.

Is this possible? Or would gravity defeat me?

Companies such as MantelMount produce TV mounts that come down vertically rather than extend horizontally.

I would recommend using something like this, created for your purpose, rather than risking turning a horizontal mount sideways. 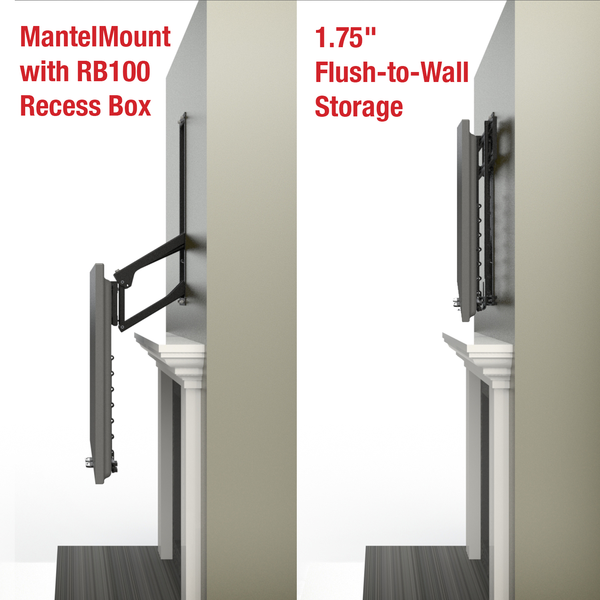 I think overall that mounting a TV above a fireplace is a bad idea. It is far from an optimum location to be staring toward when watching the thing. You apparently already understand the viewing problem due to asking about how to mount the TV in the manner you ask about.

There are several other problems to consider about this as well. One is that if the fireplace is used the heat that is generated in front of it wants to rise up and could very well be detrimental to the TV. Also consider that often the wall space above the fire place does not have the normal type of wall construction with good strong studs to which a TV mount can be attached in a decent manner.

As far as the mount itself is concerned. The sidewise type mount that allows a TV to be folded out at an angle from the wall and then pushed back flat against the wall will be a tall hinge assembly that is constructed in a manner to take the weight of the TV in a vertical (down) direction that is at axial to the hinge action. This means that the hinge will move as you push the TV around but will stay put at whatever position you position the TV to.

Trying to position the same type of bracket so that the hinge points are parallel to the floor will not work. This would put the supported weight of the TV at right angles to the hinge action and will make the hinge extend out to its greatest range of motion due to the applied weight of the TV.

They do make a different type of support for smaller computer monitors that allows the monitor to be positioned vertically. These either have counter balance springs to help hold the monitor at a given position OR there are hand tighten clamps that lock the arm assembly into place once the position is selected. They may very well make heavier duty versions of these for TVs but these are unlikely to fit particularly tight to the wall when the TV was raised to the upper stowed position.

I did a quick look online at articulating arm type TV mounts and virtually all are the type designed with the tall vertical hinge points that simply allow the TV to be pulled directly out from the wall and maybe even be positioned at an angle to the wall. From what I saw generally available there was a small selection that allow the smaller sized TVs to be tilted on the end of the swing out articulating arm to allow sight lines to be straight toward the face of the TV. Even these do not solve the issue to have to stare up at a TV that is inconveniently mounted over a fireplace.

Another thing is that none of the articulating arm style of TV mounts can be considered to be actually be a cantilever type of mechanism. The term cantilever is a misused term in the TV mount business. A true cantilever is a stiff arm or beam mechanism that is anchored on one end and then extends out over a solid support with the free end of the stiff arm supporting a load. The TV mounts are not built this way at all and the term "articulating arm" is a far more correct description of the mechanism.

The general selection of height adjustable TV mounts that have spring balanced articulated arms are designed for small TVs at up to maybe 15 pounds capacity. I did see one height adjustable mount that can handle TVs 36 to 60" size up to a maximum of 70 pounds capacity. As I said before this unit has a 6.5 inch profile out from the wall when in the folded up position and has the whopping list price of nearly 500US$. That unit also was claiming convenient single stud mounting but it would be fool hardy to mount a thing like that to a drywall covered stud.

Not the answer you're looking for? Browse other questions tagged television or ask your own question.

1
Can we mount a TV over a fireplace with the chimney directly behind it?
0
How can I mount a TV to the wall so that it folds away?
5
Need help mounting a TV to the wall
2
How can I mount a TV with widely-spaced studs and weak wallboard?
1
What is the best way to add new stud framing above fireplace and tie it into existing framing?
3
TV mount on wooden studs - what screws to use
2
Can I use toggle bolts to mount a tv on a barnwood wall?
0
Way to mount a small tv (27-32”) on bottoms of stairs angled down slightly?