How do I interpret the power supply specs for an electric convection oven?

I bought an electric convection oven. The manual says the NEMA 14-30 plug should be connected to:

It's referring to the electrical service supplying the house. Most homes in the US are supplied by a single phase service, which is often described as a 120/240 Volt system. If your house is supplied by a three phase system, it could be a 120/208 Volt system.

In both these cases you'll be able to install the equipment you have. 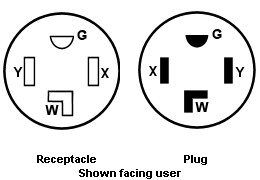 The circuit will require a 30 ampere double pole breaker, and four at least 10 AWG copper conductors. You'll connect one ungrounded "hot" conductor to each of the X and Y terminals. The grounded "neutral" conductor goes to the W terminal. And the grounding conductor connects to the G terminal.

Not the answer you're looking for? Browse other questions tagged electrical appliances oven or ask your own question.

3
Is 40-amp breaker enough for my new range?
3
What amp breaker for 20 Amp electrical oven and 40 Amp electrical range on same circuit
3
What size electric service do I need?
9
How do I wire a brand new cooktop that has no white neutral wire?
1
Should I use 12/3 NM cable for a 240 volt 40 amp electric cooktop?
0
Got a used Electric oven - not sure what wire and breaker to use
3
brand new oven heat element gone bad. my fault or faulty oven?
0
Oven 40 amp breaker tripped, replaced with like kind, no 240 volts
7
Why does my electric oven present the option of 40A and 50A breakers?
5
Installing a new electric cooktop details