How should I control my garage heater?

I just purchased a garage heater from my local big box hardware store and I am planing to set it up, but had a couple questions I'd like to run by the experts around here.

Firstly, I originally planned to set up this heater (like I've done in other garages) via a contactor. But I've only set these up in that past in larger garages where it warranted multiple units that led to a single thermostat control. Wire up each unit to their own 30 amp breaker and the thermostat to a 15 that controls the contactor.

In my fairly small garage I don't need multiple units so I was thinking of just setting it up with a thermostat, like this one. I am curious:

For less than an hour, that is an acceptable load, but heating equipment wiring must be rated for continuous load according to the NEC.

Either get a lower rated heater instead, or use a contactor. The contactor also provides the benefit of allowing a smart thermostat.

From the Installation Instructions

If a remote line voltage thermostat is used it should be rated for higher than the amp load of the heater connected. 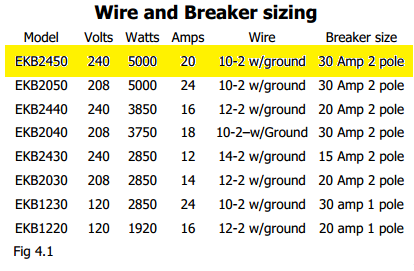 However, NEC requires conductors (210.19(A)(1)(a)) and overcurrent devices (210.20) feeding continuous loads to be rated 125% of the load. So the breaker, the conductors, and the thermostat should be rated for at least 25 amperes. Which is why a 30 ampere breaker, and 10 AWG copper is required as per the instructions.

Not the answer you're looking for? Browse other questions tagged electrical heating or ask your own question.

4
Amp rating of ganged circuit-breakers
1
Is there a thermostat-controlled corn heater sized for a shop/garage?
2
How many Amps in a Garage. AND how to maintain consistent lighting from an outlet (no flickering)
2
Why can't I measure 240V on this wall heater wiring?
2
Using 15 amp thermostat on a 20 amp circuit
2
Using 15-amp thermostat on a 20 amp circuit
1
What could cause a thermostat to distribute electricity to only one heater out of two?
0
Replacing Subpanel in Garage - Double Check
2
New garage heater tripping breaker