How should I install a french drain in this situation, and will it help?

I need to install a french drain to prevent the water from getting to the wall of my house. The water is coming off a patio, here is the layout 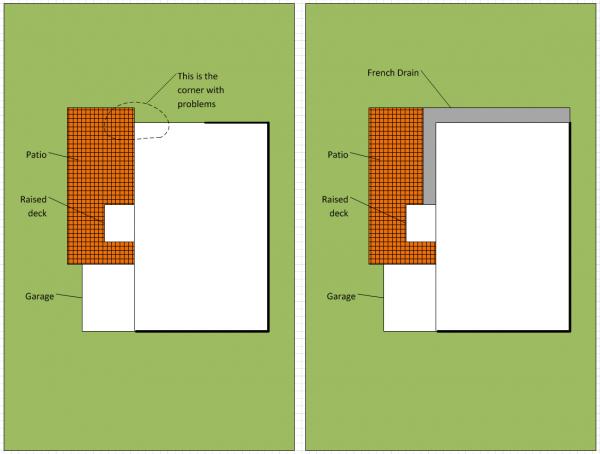 I would like to understand a couple of things:

1) How effective is a french drain that is so close to the wall as in the picture below: 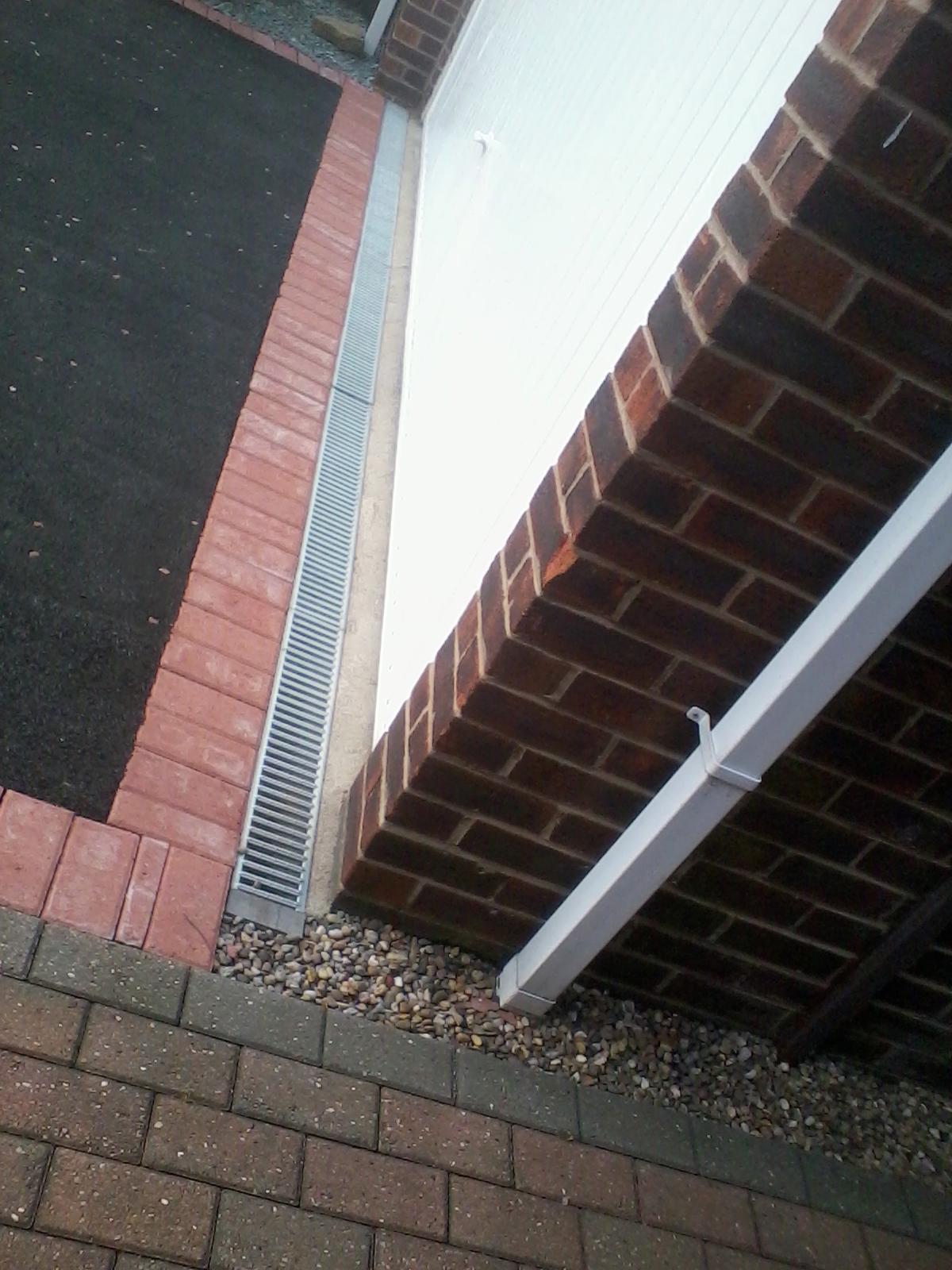 Below is a drawing (not mine) representing a french drain. Just to be clear, Our house does have gutters, clean and with no problems. 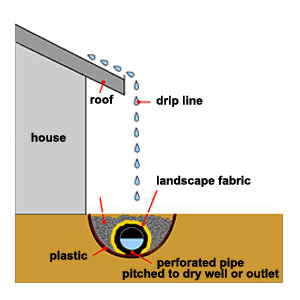 The above picture shows a foil of plastic that is installed in the french drain before anything. Doesn't that defeat the whole purpose, which is to collect water from the near by area in all directions? On the other side my concern regarding to the effectiveness of a french drain that is built attached to the wall of the house is questioning an issue that could be easily avoided by installing such a plastic foil on the side of the trench that faces the house wall. My concern is that in the eventuality that something goes wrong with the french drain the water will collect close to the house wall and it will actually aggravate the problem.

2) I also don't understand, in the absence of the plastic foil, what prevents the water from getting further below the gravel in any direction. The only time when the pipe will collect water is when the amount of water is more than the soil at the bottom of the french drain can absorb which is not very often. 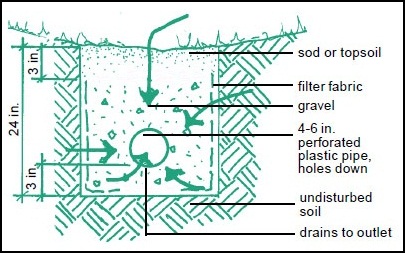 Home depot recommends a patio excavation of around 8-9".

EXCAVATE
The highest point of a patio surface can be as much as an inch above grade-enough so that the lowest section is at grade. Remove the sod. Then remove 4½ inches of soil plus the thickness of the pavers to make room for the 4-inch gravel bed and a 1½-inch sand base, leaving the lowest surface of the pavers 1 inch above grade. Excavate the rest of the patio, following the slope of the lines.

4) I am not sure about the soil that is under the patio but the surface of my patio is clearly not graded. The yard of my house is graded toward the North of the below picture. My question is: can I grade just the section that is north of the raised deck? The area under the deck and the area south of the deck is not getting lots of water and the wall is fine in that area.

5) If I have the french drain installed as in the layout from the first picture will it be effective since there is a 90 degree turn at the corner of the house?

The water table around my house is very high with a lot of surface water due to clay subsoil. My experience of 25 years in my current house (boat?) is adding a french drain around the house is a patch to a larger yard grading problem. I've done this and eventually they clog and need maintenance. Over time I've regraded most of my yard so water flows away from the foundation. Gravity never fails and never clogs! My guess is your patio is sloped incorrectly towards your house. Short of replacing the patio, a french drain is the only alternative I can think of. They work when installed correctly.

I just replaced my patio this summer. We had a surveyor transit, built up the area with dirt/aggregate and put in a slightly steeper pitch. The one small part slopes towards a french drain to my downspout. I was afraid the water would run into my neighbors yard and I don't need those problems! The larger section pitches towards a special garden area that was dug out and filled with mulch and water loving plants. It gets very soggy! Again, my approach is to slope the water away from my foundation and then do something with it there. Through hard knocks I've learned solving a water problem at the foundation is the least desirable place to address the problem. Unfortunately for many, prior mistakes make it the only alternative.

Not the answer you're looking for? Browse other questions tagged french-drain or ask your own question.

6
Can I regrade this gravel section of yard myself?
2
How can I prevent interior French Drain from further eroding soil under garage slab?
5
How far from the foundation and how deep should a French drain be?
0
Back Yard Hill Drainage Issues
2
Will a french drain help the runoff ditch in front of my house?
0
How should I drain an area of gravel between a sidewalk and retaining wall?
1
Downspout overwhelms French drain and water enters basement-- how to fix?
0
How far out to install french drain so water can't pass underneath it and still get into house?