How far down should sheetrock come in a shower tub installation?

How far down should sheetrock come in a shower/ tub installation?

Ideally, drywall should be in the next room, or at least around the corner. Tile backer board (not green drywall - cement-based products in 3x5 sheets) is much better for the job. If you think you simply can't do that, stop the drywall at the top of the tub surround or shower enclosure and switch to backer board from there down. And use moisture-resistant drywall, at least.

It should (be backer-board) rest on the flange, like this picture: 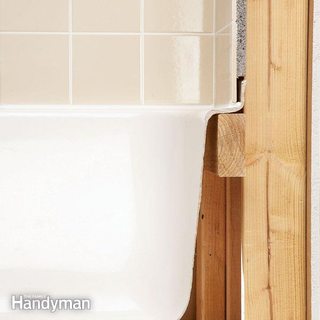 Picture says it all, click here if you want to read more words.

I have seen many tub/showers where the tile ends a few inches above the shower spout and the last foot or two is drywall and I've never seen a problem with that. But in my bathroom renovations I use backer board and tile up to the ceiling. I feel comfortable using regular drywall on the ceiling as long as you have good ventilation.

You can bring sheetrock right down to the flange just like in the picture as long as you aren't going to tile over it.

I would suggest using sheetrock over backer board on surfaces which you intend to paint. Backer board has a rough surface and is difficult to get a good result from painting which is why many installers just run tile right to the ceiling.

I also have a few other suggestions. First thing is that you should install a vapor barrier behind the whole area behind the tub/shower right up to the ceiling. This will help prevent moisture from propagating through the sheetrock and into the wall cavity behind it. This will also help prevent the growth of mold inside the wall.

You definitely need to use sheetrock that is rated for moisture. It is either colored green or blue. The blue board is a bit better since it doesn't have paper on the outside of it and is mold resistant.

Another thing which is really is a rookie mistake is to use paper tape on the seams. Paper tape gets water logged over time and begins to peel. It also is where mold loves to grow because they feed off of the organic compounds in the paper. The proper tape to use in wet areas is made of a plastic webbing. They sell it at most home stores and it should be located in the same area.

You should also be sure to countersink the heads of the drywall screws deep enough so you can get a thick coat of compound over them, otherwise they will rust. I would also suggest using a good primer and paint which is specific to kitchen and bathrooms.

Not the answer you're looking for? Browse other questions tagged bathtub or ask your own question.

19
Should the backer board be in front of or behind the tub flange?

2
How should I fix a small crack hole in Mirolin 3-piece tub/shower?
2
What could cause low water pressure in tub and no water coming out of shower head?
4
How do I replace shower / tub handles / spouts?
1
Low pressure in shower of tub/shower combo
1
Tub installation/level questions
2
3 valve shower allowing flow to tub and shower
1
Why has my tub spout diverter not dropping back down after use? (brand new installation)
0
flow diverter for a nonstandard tub installation