What can I do about my kitchen sink that has clogged suddenly and completely?

I had no problem with my double kitchen sink ever since getting Nu-Flo in our 1970s pipes, and their installers told me the kitchen drain had been installed going up instead of down so it caused the sink to back up. They fixed it and my sink drains fine ever since.

Yesterday I was rinsing out a small milk frother and trying to remove small bits of carmelization from it on the right sink, so the water was mostly clear. Suddenly the water backed up. I plunged that side while holding a stopper over the left side. It didn't have much effect. I used a product called Plumb Away that supposedly whooshes air at high pressure. I could hear and feel some movement on the stopper but saw little to no effect on the drain.

Plumb Away says if you use it three times with no effect, call a plumber. The third time I used it, water came spurting out of the thing next to the faucet, all over me, but still the water didn't budge. I don't want to call my landlord because if they will try to charge me for the plumber.

Overnight the standing water went down very little. It's strange that the drain went from fine to completely clogged in one instant and I wasn't pouring anything cloggy down. Also I would say I'm a light user of the sink because I don't cook a lot, I don't pour grease down it or anything like that.

I called my downstairs neighbor and she said her sink backs up when she uses the disposal. I did run the disposal and the left side went down immediately but no effect on the right side. I didn't know this but apparently the disposal only is for one side? (I hardly use the thing honestly, never had one before so not accustomed to using it.)

Does this sound typical? Do you think it can be fixed by something like Drano Gel?

Edit: The thing next to the sink looks like a sprayer would go there but there's nothing there. I have no clue what it is, and when I tried to find imgs online I couldn't find anything similar so I had to get up (ugh) and take a pic, sorry for the dirtiness of it: 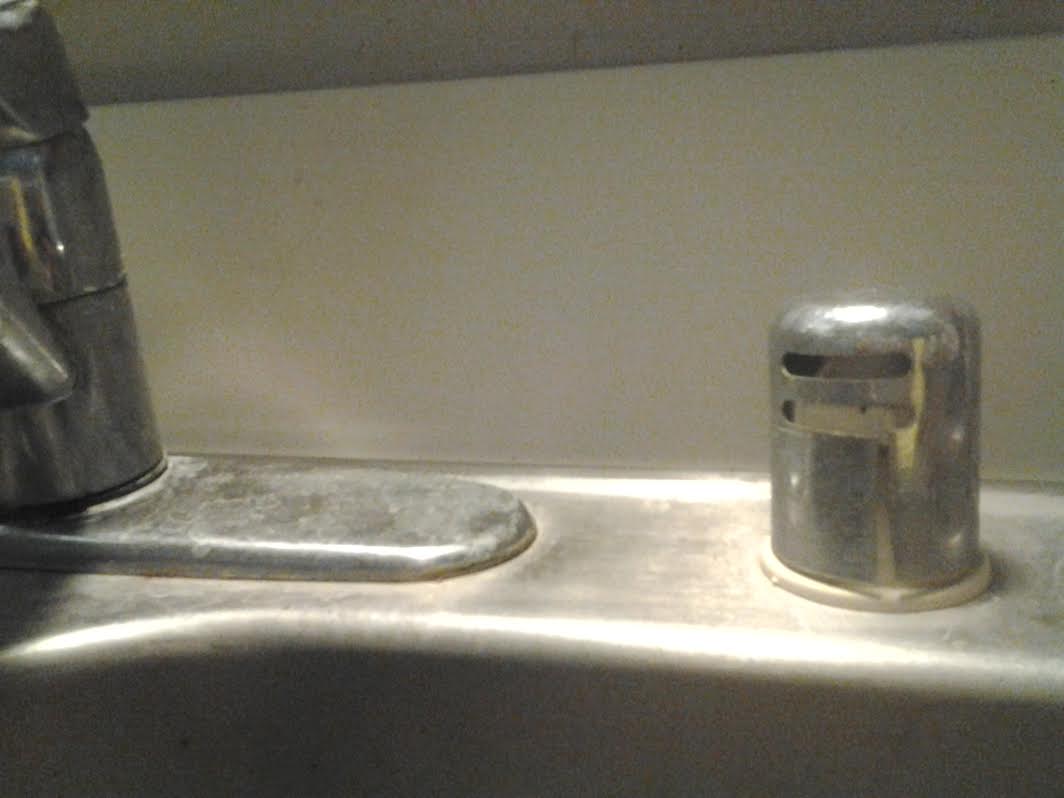 No probs with the other drains. I called one of my downstairs neighbors and she said she has ongoing probs with her kitchen sink backing up when she runs the garbage disposal. I assume we are on a sewer system.

Edit2: I tried Drano Gel, followed the directions for the tough clog and used the whole bottle for 30 minutes, and it's still clogged. I guess I gotta call the ogre.

Usually it is illegal for the landlord to charge for building repairs. The only time a landlord should be able to charge is when the damage is not from normal wear and tear (like dumping a pot of rice down the garbage disposal).

It's hard to guess what is causing the blockage but bet it is related to the Nu-Flo coating de-laminating and clogging the drain. It is best to notify the landlord to have a plumber come out to auger the line.

Followup: On the seventh day of clog, before the plumber appt was even made (property manager is horrible), I noticed the standing water was gone, and there was no more clog, everything ran fine.

Weirdly, the next morning I noticed a flood on our first floor where the water heater is. I don't know if the events are related but it was a strange coincidence.

1
How can I disassemble this P-trap?
2
What could be causing my sink and dishwasher to back up?
1
Dishwasher drain backing up into sink
2
Backed up kitchen sink drain that gets worse when I run garbage disposal
5
Constant backed-up water from dishwasher drain
0
Kitchen sink stopped up and draining into diswasher
3
Clogged sink drain after washing paint brush and roller
2
Is there regular maintenance that can be done to help maintain open kitchen drain lines?