One of the switches in this 2 way setup has been acting up, I popped it off to replace it and it's wired like this: 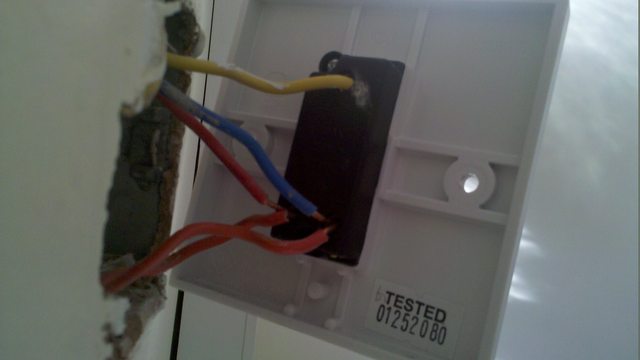 The only configuration I know of that is like this is the Carter system. Is this definitely Carter or could it be something else? If it is Carter then how bad is that, does it need rewiring?

Here's a shot of the wires entering the wall, in case that helps: 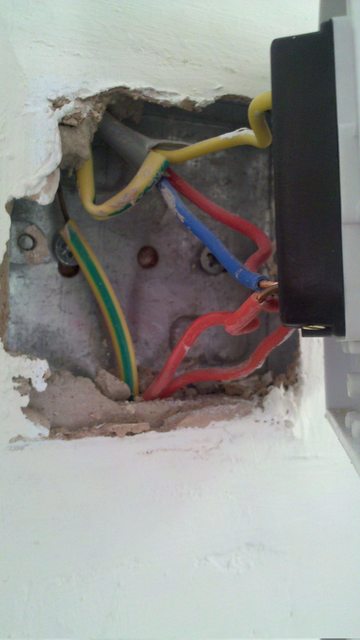 The only dangerous thing i see there is that that the wires is not properly inside the plug..

If you see the copper on the red wire = dangerous.

But the flicker will be because it is not screwed in properly most properly. You will need to turn off all power and look properly on the wires.. you will need to pull them .. like pulling a door to open is enough.. if wire comes out then that is the flicker problem.

Your plug should look like this with the wires... and the screws should be tight.. You see the wires are inside the holes and you cannot see any bare wire! The bare wire must only be enough for the screws to touch.. sometimes people fold it over for better contact. 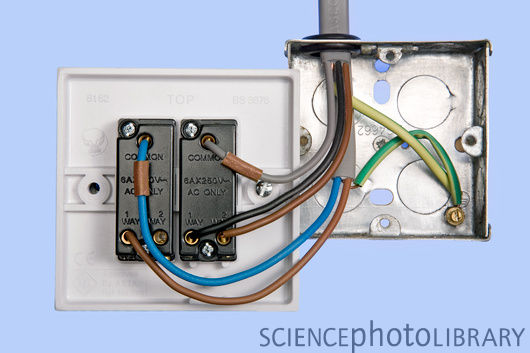 The "California Three-Way" could be wired similar to what you have shown. Fundamentally, it wires each wire of one three-way switch to the corresponding wire of the other; if the switches are in opposite positions, each switch will form a connection between the wiper and one other terminal, and thus the two non-wiper terminals will be connected.

The primary advantage of the California three-way as compared with running either two switched travelers to a remote switch and having it return the properly-switched line, or running hot to a remote switch and having it return two travelers is that the remote switch gets access to both hot and a properly-switched line without having to run an extra wire. The disadvantage of the California three-way is that parts of the circuit have no clear "upstream" and "downstream" relationship. In general, disconnecting all the wires upstream from a circuit will kill power to it. In the C3W configuration, that doesn't necessarily hold; one can disconnect the unswitched hot wire from part of a circuit and still have it receive power through switches. The safety risk from that is probably not as severe as the risks posed by the Carter system, but some building codes may still not allow it.

2
How can I control 2 lights with 2 switches so that both lights can't be on at the same time?
2
I ran into two hot lines when replacing a three way switch
1
Light fitting with power but no 3-way switch function
0
How can I replace this light switch?
1
How is this 3-way switch circuit wired?
1
Thoughts on this 3-way wiring job
2
Is my 4-way switch replacement job safe and up to code?
1
"Wrong" wiring for three-way switch
1
Why is my light switch wired like this?