I don't know too much about replacing outlets, only what I've read online or through YouTube videos. The house was built in the early 50s. Some outlets have been replaced (brand new kitchen) but some are still the old 2 prong. I bought a receptacle tester and tested the newer style outlets, which all tested as correct wiring. Upon opening and inspecting, none of these new 3 prong outlets had no ground wires. Does this mean the boxes are already somehow grounded? I'm even more confused now that the receptacle tester said that they were correct. Please help!

There are only 2 correct and safe ways to add a 3-prong outlet where formerly there was only a 2-prong one*:

There are many wrong ways to add a 3-prong outlet, most of which are dangerous and some of which are hard to spot or test for:

*There are actually a few other ways to ground an outlet safely, e.g. with armored cable with a bonding strip or a grounded box plus an outlet that allows grounding through the strap. But those are both pretty uncommon.

I don't know too much about replacing outlets, only what I've read online or through YouTube videos.

That's a good start but I would strongly recommend that you learn more before you make potentially safety-impacting changes in your electrical wiring. In particular if you cannot immediately state the relationships between amps, volts and watts, if they are in any way unclear to you, don't work on power systems until you've internalized them. You wouldn't want someone who didn't understand the difference between weight and height to work on your house, so don't let someone who doesn't understand the difference between current and potential to work on your wiring.

Henry Jackson's answer describing the right and wrong ways to deal with this situation is good but I would add a few additional details to clarify why various options are unsafe.

First of all, let's talk about the purposes of the three wires. The hot (black) wire provides a voltage and therefore delivers current to the appliance plugged into the plug. You know that the total current through a circuit is constant, so that current has to go somewhere; it goes from the appliance to the neutral (white) wire, which is connected to ground. The neutral has current, but supplies no voltage. By design the safety ground never carries current; if it is carrying current then the wiring is by definition faulty, and you have a ground fault. The safety ground, as its name implies, is there for human life safety; in the event of a fault there is a clear path to ground for the current, rather than it trying to go to ground through the human holding the faulty toaster.

Let's make sure that's clear: the fundamental purpose of the ground wire is to ensure that even in the unlikely event of a fault, the current passes to ground through the wire, not through a human. A system which lacks this property is unsafe in the event of a fault.

So, why is Henry's safe way one safe? Because there is a dedicated copper wire just for the safety ground that goes back to the electrical box, which is typically connected to a copper rod driven into the ground.

Why is Henry's safe way two safe? Here we have no safety ground at all. Rather, the GFCI contains a detector which measures the difference between the hot and neutral currents. Again, current is constant throughout a circuit, so if there is a difference between the current in two halves of a circuit, some of the current must be going to ground not via the neutral, and it might be going through a person. The circuitry cuts the power going to the appliance in this case.

Now, immediately we note that the GFCI outlet does not cut power at the breaker. (You can get GFCI breakers, but let's suppose you do not have one.) It cuts power to the appliance. It therefore does not provide fault protection in the case where the hot wire has electrified the ungrounded box that the GFCI is in, because the box is not the appliance. A human could touch that box and be shocked and the GFCI would provide no protection. You can use GCFIs to increase the safety of a circuit that has no safety ground, but they are not equivalent protections. A GFCI provides less protection than a safety ground because it does not ground an electrified box, and it provides more protection in that there could be a small leak of current to the safety ground but you'd never know if it was not enough to trip the breaker.

In environments like kitchens and bathrooms where there is likely to be a combination of water and electricity, the best practice is to have both a safety ground and a GFCI-protected circuit. Remember that a correctly-wired GFCI provides ground fault protection to every outlet "downstream" of it, that is, every outlet hooked up via the LOAD terminals.

The discussion above shows that there is a third safe way to deal with an ungrounded circuit, and that is to add a GFCI at the breaker box.

The first and second wrong ways are the same: the appliance is not grounded via the safety ground at all. In the event of a fault that electrifies the appliance, a human could be the best path to ground.

The third wrong way -- connect the safety ground to the neutral -- is wrong but why is a bit subtle. The neutral is connected to ground, so the appliance is in fact grounded in the event of a fault, right? Well, let's think about that. The assumption of a well-designed safety system should be everything but the safety system has failed, and this is your last chance to protect the human. What if the wiring is faulty such that the hot has electrified the box and the neutral wire has broken? Now the safety ground is not grounded to anything because the neutral wire is broken, and the box is electrified.

The fourth wrong way -- connect the ground to some metal object -- is again subtle in its wrongness.

First of all, the metal object might not actually be grounded. Metal-clad cable, for example, could have been fed itself from an ungrounded box. That pipe could be part of an ancient plumbing system that is disused and has been hacksawed away from the real plumbing (which should be grounded). Or, it might be grounded now, but not grounded in the future. People do not think "I might need to rewire the bedroom because I upgraded the plumbing in the bathroom". Don't go making a hazard for people in the future.

Second, the metal object might be inadequately grounded. The conductors -- which were by assumption not designed to be a part of a safety system -- might be inadequate to take the current imposed by a ground fault, and they could melt, thereby ungrounding the system, or start a fire. Now you're not only being electrocuted, your house is on fire too.

Third, the metal object might be adequately grounded, but not bonded to the ground for the electrical box. Suppose you have two distinct grounds -- the electrical system ground, and a bit of plumbing -- and they actually physically go to ground at opposite ends of the building, and they are grounded in dry, sandy soil. In this scenario it is possible that the two grounds have different potentials, and now a human can be touching two grounded things and still get shocked. All the grounding systems in a structure have to be bonded to each other. (I know this from personal experience; my house had two distinct grounding systems in exactly this manner when I moved in. Fortunately it was never a problem, and it was easily fixed by running a short piece of heavy-duty wire between the plumbing and the electrical box.)

The only time metal sheathed cable can be used as a grounding conductor is if it has a thin aluminum bonding strip. You MUST assure this is your kind of cable before re-installing grounding type receptacles. 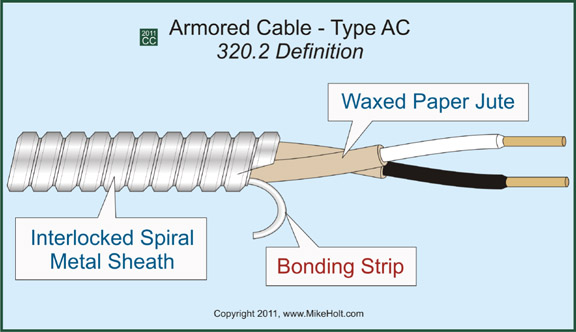 Late answer, but hopefully helpful to someone. Like the OP I was confused because, although my 60's house has mostly 2 prong there are a couple 3 prong and they test "correct". Figured out just recently that it was because my house was wired with armored wiring to metal boxes. Decided to DIY the 2 prongs to 3 prongs despite not knowing much at first, but did the research and troubleshot a good amount to finally finish today.

I went the GFCI protected receptacles route and I just completed replacing all the 2 prong outlets in my home with GFCI protected 3 prong outlets so I thought I would share some of what I learned in the process. The Sparky Youtube channel, this forum, and some thoughtful troubleshooting helped me get it done. Total cost was less than $300, including tools and parts for about 30 outlets. Disclaimer: I am not an electrician. This is just what worked for me.

Safety first. I checked and rechecked to make sure I was not dealing with any hot wires and never touched a hot wire (used a non contact tester). Test all the wires EVERYTIME before you work on them. Even the white wires can be hot sometimes!

Steps I Took. I don't have any fancy equipment so these are the steps I took to find the start of each branch (where the GFCI goes). This is to replace old 2 prong outlets with no ground wiring present (only black and white). Be sure to know exactly what outlets are on each switch in the electrical panel before starting. My electrical panel labels were way off.

Took me many many hours, but I learned a lot, and everything works as intended so very happy with the results.

Not the answer you're looking for? Browse other questions tagged electrical wiring receptacle grounding or ask your own question.

0
In an old house, do I need a ground wire to install newer outlets, lights, and appliances?
0
How should I connect an electric cook top to an existing dededicated 3 wire armored cable?