EDIT: The attached photo is the most easily accessible example of the conduit used in the entire house. This shows the conduit attached to the garbage disposal with the previously mentioned 3/4 set screw connector. Not shown is the wire contained inside. However, the wire is just loose insulated conductors that have a fairly large amount of play and in some cases, slack where you can pull additional wire out of the conduit up to a point. It doesn't look to me like that would be possible with the conductors in an armored cable.

All of the outlets in our house test as being properly wired (i.e. include the presence of ground). The house is wired with 12ga THHN pulled through flexible metal conduit. However, ground conductors are not present anywhere. Thus, each jbox is grounded only by its connection to ground through the conduit.

My concern is, although there may be electrical continuity to ground via the flexible conduit, the electrical connection at each jbox must be rather poor since the conduit is physically connected only by a set screw. Said another way, I really have to question the ability of the conduit to carry any significant fault currents.

I suppose if all the circuits in the house were on GFCI breakers, a crappy ground wouldn't be much of a safety issue since the ground could certainly carry enough current for the breaker to detect the current mismatch and trip. Since that isn't the case, it seem to me that any path to ground needs to carry enough current to be able to trip a regular 20 amp breaker in a timely manner.

Are there any significant safety concerns with this method of grounding, and/or should I consider having ground conductors pulled or, I suppose, having the house rewired with new 12/2 (or 12/3 for the multi-wire branches)? 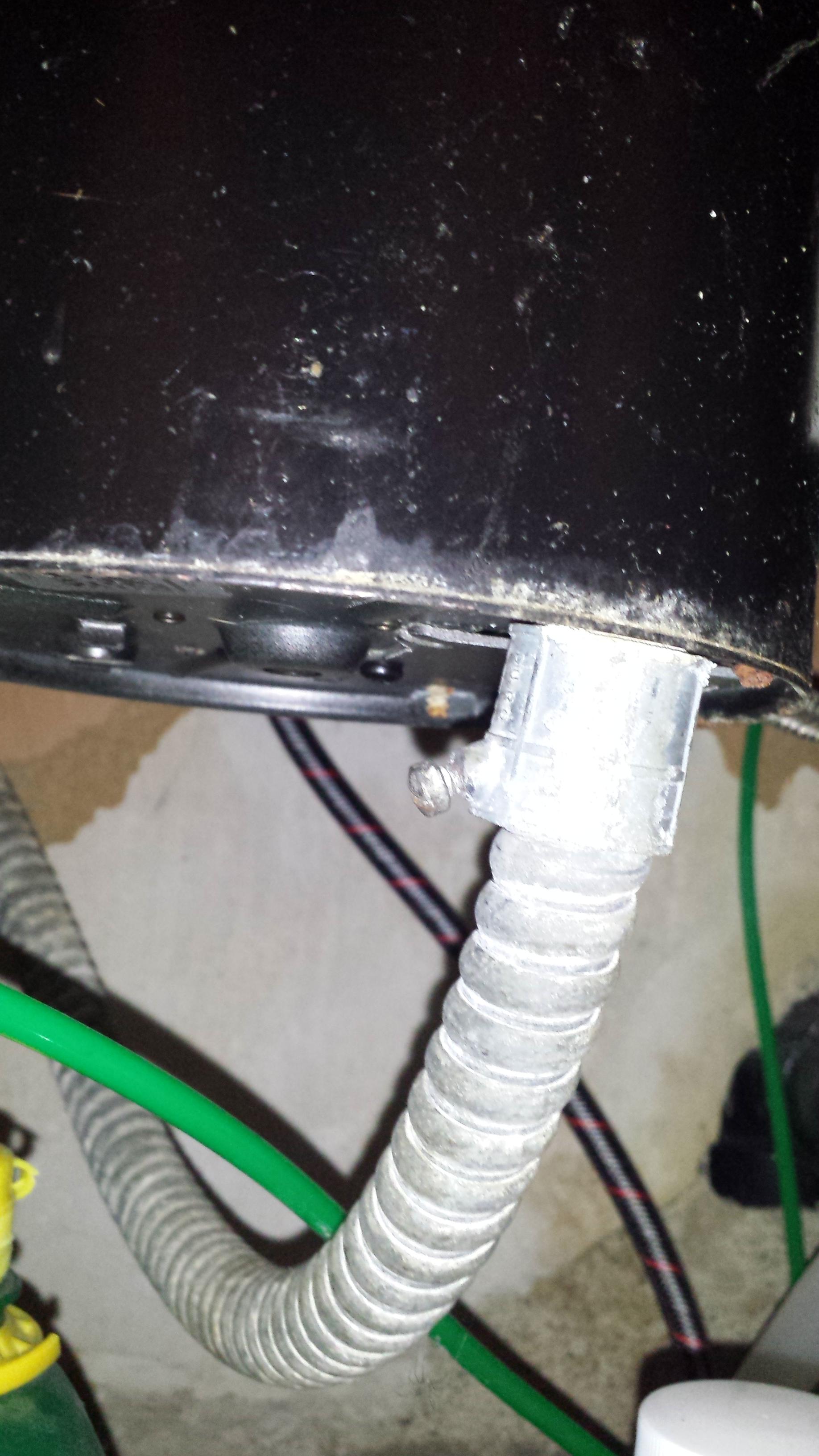 Re-pulling through installed flex is a nightmare. If you do, keep in mind that new-style dimers require a neutral. -EMT fittings? I'm guessing there's no red bushing either.

"In general FMC or flexible metal conduit is limited to 6' in length when used as an EGC (equipment grounding conductor). Since this is an old installation it's likely grandfathered in, however by modern standards it's could be considered ungrounded even though all of the components of the system are metallic. Is the stuff in the photo actually FMC or is it old AC (BX) cable?"

a. The conduit is terminated in listed fittings.

b. The circuit conductors contained in the conduit are protected by overcurrent devices rated at 20 amperes or less.

d. Where used to connect equipment where flexibility is necessary after installation, an equipment grounding conductor shall be installed.

said by nunya, at dslreports.com, +1'ed by Speedy Petey:

Most BX is neither safe or acceptable for use as an equipment grounding conductor. Only BX which includes a bonding wire or bonding strip may be used as ground. Most "BX" style AC cable installed in the 30's-60's does not have the required strip.

Using BX as a ground is extremely dangerous, because it is not a low impedance path to ground. Rather than clearing a fault, the spiral jacket (especially in places where it might have some corrosion) will heat up like a toaster element. I've witnessed this several times. The cable clamps in the original boxes also were not typically listed for use as a grounding electrode conductor.

so I'm not sure if im too late for your answer, but an EMT connecter and Flex don't go together. You want to use a BX connecter to bond that flex on both sides and you need a red plug bushing on each side to protect the cables from being pinched. you can also use a few wraps of electrical tape around the conductors (push under the flex) if you cant find the red bushings . Also in todays rules if you change it, it has to meet todays standards. Metal flex is not a ground, it's only a bond between two boxes. You need to pull a Identified ground wire into that run which is very simple.

Turn off the breaker first and then test for safety. Disconnect the wires on both side of the flex. then get a green and a white wire a bit longer than whats in there. tie and tape the new green and white to the old white making sure the tape job is extremely tight and squese and work it with lines man pliers or something simular so it can slide in the flex easily. then pull the single wire out and vola . very simple.

44
Why does this receptacle have the ground tied to the neutral?
0
What does this answer about old residential home grounding mean?
2
Suitability of disconnect switch
4
Why are ground wires required to be so large if a short results in an immediate breaker trip?
7
Any way to meet code with 40.7% or 40.44% conduit fill?
2
Sizing Ground wire for 200AFeeder to House
10
Can I use a *ground wire only* conduit for copper data cables?
2
Old Subpanel with 3-wire Feed, with Neutrals and Grounds Bonded Together, but With Metallic Path Between Structures – Wrong or Not
1
Flexible Metal Conduit through drywall