Can I hold a Hammock up with Star Pickets?

I would like to hang, my Hammock. Unfortunately the new property doesn't have any handy trees etc.

So I thought I could perhaps secure it to some star-pickets. The ground is quiet sandy, and I don't have the option to sink a bag of cement on to the end of each picket.

I thought I would get 2x 8ft pickets, and beat them 2 foot into the ground -- leaving ~6 foot above the ground to secure the hammock to. Then add 3 more smaller "outrigger", pickets around each main picket to brace against side ways force.

To draw rough sketch of a overhead view. With the pickets in Red, the guy-wires in blue and the Hammock in the middle:

Will this work? If so: How tall should the outriggers be?

I was thinking 5ft, but maybe I would be better off with little 2ft ones and driving them basically the whole way into the ground?

The thing about hammocks is that they create tremendous sideways forces. With the following configuration, you balance them well, but still create large tensions in the cables and a very large compressive load on the upright: 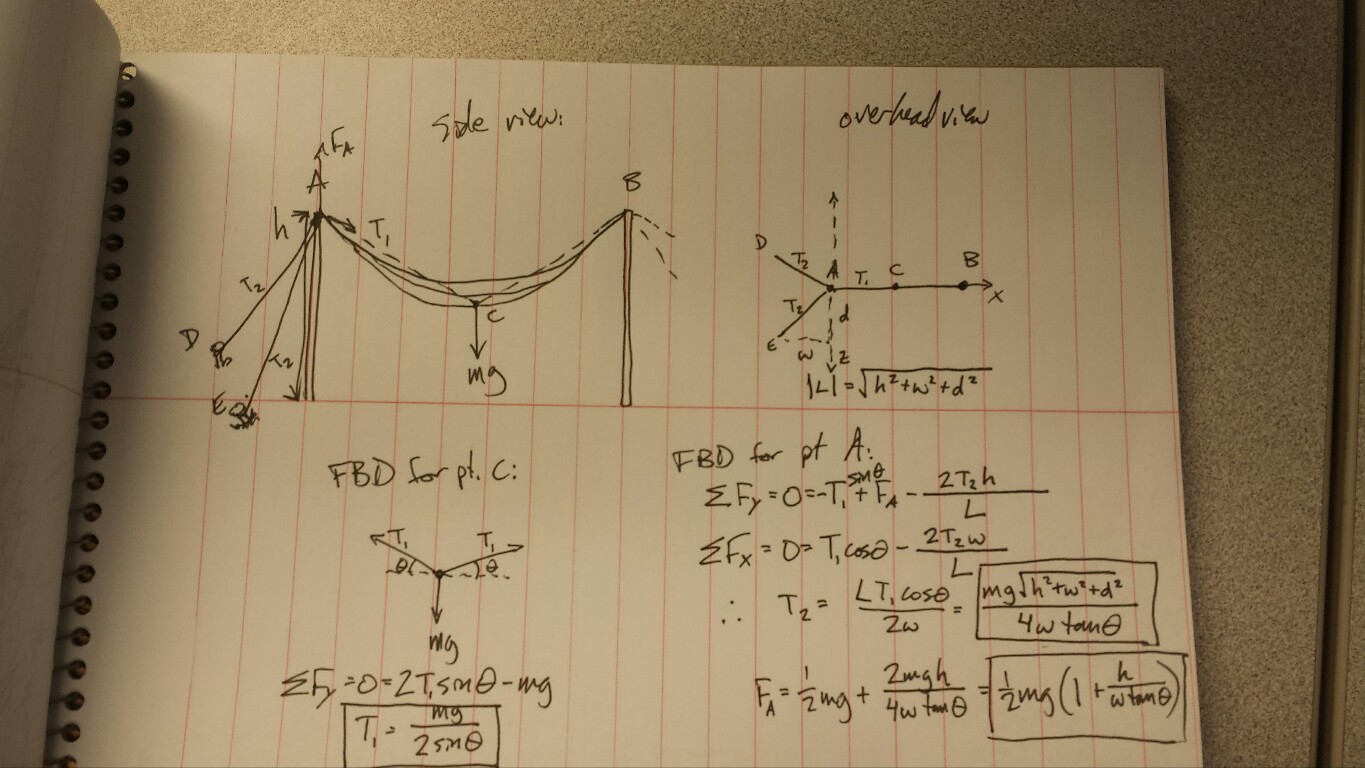 Changing the mg, h, w, d, and theta variables will result in new values for each of these forces. For example, increasing w in relation to h will result in a lower compressive load on the pole, and a lower tension in the guy lines. For all other variables constant, changing w to 6 ft results in T2 = 161 lbs, and Fa = 255 lbs.

For best results, you want to minimize the bending moment of the posts, since that's what tends to pull them out of the ground. So attach your guy lines at the same spot as the hammock on the upright posts, and then attach the other end as close to the ground as possible. You'll probably just need some very beefy stakes, rather than T-posts for the end of the guy lines attached to the ground.

@Ratchet Freak's suggestion of angling the base of the poles in toward the center will increase compressive load on the poles an minimize tension in the guy lines, since Fa will be pointing up and away instead of just up. However, you run the risk of adding buckling and twisting as a problem with that solution.

Might I suggest using a hammock stand instead? They're not too much more expensive, and they'll do a much better job remaining stable.

A hammock will pull the attachment points inwards so you should focus on countering that force. In your setup it will pull the outriggers out of the ground.

What you should do is put the pickets sideways into a tripod arrangement. If you can make the droop angle stay close to the plane made by the inner pickets then most of the pulling force will be pushing on those and the outer picket is then there to stabilize the entire thing.

Not the answer you're looking for? Browse other questions tagged outdoor hanging or ask your own question.

16
How can I hang a shelf with no visible fasteners?
2
How much weight can lagbolts hold, or how can I support this piece of slate on a wall?
3
Can I use a wire rope to support strings of lights?
1
Name of accessory to hold rope together?
0
Can I use a 1/8 thimble with 1/16 wire rope?
2
How can I mount a mailbox on a stucco wall?
8
What is this hinged metal hardware with an eyelet?
0
Installing Hammock Chair from Ceiling with Metal Joists
2
Can I install an L-Bracket at an angle to match the direction of the load (for a Hammock)?