Where I live I have well water. Ever since I bought the house, 14 years ago, the pump has stopped working after approximately 30 to 45 minutes. At that time you head on down to the basement and lift a lever to increase the pressure. After the pressure increases the pump works fine. I'm in the process of selling my house and am trying to figure out if this will be an issue and if so how much will it cause to fix. Up unto this point we have always used it as a safety measure, i.e., can't run continuously without it turning itself off. It has never been a problem for us.

If the lever you are referring to is on the side of your pressure switch: 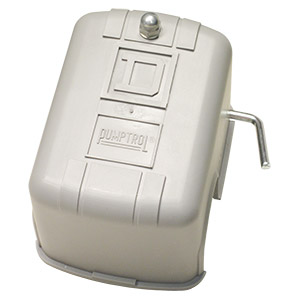 Then I unfortunately have not very good news for you. As the name implies, this cuts off the switch entirely when the pressure drops to about 10psi below the cut-in point (eg, most well pumps are set up to turn on at 40 and off at 60psi, so the low-pressure point is about 30psi). It's there to prevent the pump from running dry.

Without any other information, my best guess would be your well is not producing enough water to keep up with demand. This seems to be consistent with your statement that it only happens after 30-45 minutes: there is enough reserve capacity in the well itself to supply you for a while, but ultimately, the rate of water entering the well is lower than the rate you're using water.

The ultimate fix for this is to install a cistern or holding tank that the well pump supplies, and have a second pump in that that actually supplies the house. The cistern is controlled via float (instead of pressure switch) and the well pump is protected by a load-monitoring device (eg: Pumptec by Franklin-Electric) that turns off the pump electronically if it senses no-load. The size of the tank largely depends on how much capacity you want, what the actual yield of the well is, and logically where the tank will go and how big you can fit. Commonly, the cistern is a large cylindrical PVC tank installed in the basement.

The other main cause would be an undersized or under-performing pump that is unable to keep up with demand. The symptom of this would be that the pump runs constantly during use, rather than cycling on and off, and that you generally have a consistently low pressure for that time prior to the low-pressure switch cutting out.

Replacing the pump in this case may help, but if you have a low-yield well then it's a waste of money. Considering it's been happening for 14 years, it seems unlikely this would be something mechanically wrong (I'd expect the condition to worsen over time, or for the pump to have failed by now) and more likely that the pump was undersized, IF you also have the symptoms I described.

If you can determine the pump is undersized, then replacing it with a larger pump would be one way to remedy the problem (assuming there is no yield problem also).

The next best course of action would probably be be to test the yield of the well. You may be able to do this yourself, but a professional will bring in a much larger pump and test the flow right at the well, bypassing all the pressure controls and inside piping that would interfere with the results.

Of course, seeing as you're selling the house, you'll have to make your on judgement call on what you do or disclose -- advice on that is beyond the scope of this site.

Not the answer you're looking for? Browse other questions tagged well-pump well or ask your own question.

6
Why does my water pressure drop after using my water hose for a few minutes?
3
What would cause a well pump to suddenly be louder when operating?
1
well pump keeps turning on and off every few seconds
3
Water pressure drops in well water home, stops completely for 5-10 minutes, then comes back full pressure
1
Will replacing my jet pump with one that has a higher shut-off pressure increase the discharge pressure?
1
What is the difference between a cheap and a more expensive submersible well pump?
3
Well pump issues for irrigation system
0
What is indicated by a well pump temporarily recovering when shutting off the power for several hours?