I have a GFCI outlet out by my pool. I have a timer switch inside that sends power to that outlet. My pool pump has a plug that is GFCI (I assume that is what a plug is called it has a test and reset button). Whenever my timer switch sends power to the GFCU outlet my pool plug GFCI trips. Push the reset and everything is fine. Unplug it and plug it back in works fine no problems. The only time it trips is when it is plugged in and the GFCI outlet receives power.

What is causing this and how can I fix it?

This sounds highly unusual some plug mounted gfci s need to be reset whenever they receive power but as you said you can unplug it and plug it in without having to reset it so I would check the wiring at the switch to make sure that it is breaking the hot wire and not the neutral also make sure the bare ground wire is not contacting the neutral at the outlet or in the switch box.

Your exterior outlet is GFCI protected so just (void the warranty) cut the plug off the pump and put one of these on it. 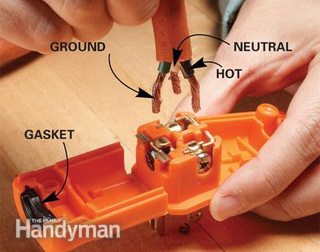 Not the answer you're looking for? Browse other questions tagged electrical gfci pool or ask your own question.

2
Why is my timer tripping the breaker on my pool filters power cable?
2
Circuit tester trips new GFCI
3
GFCI Outlet Trips with Receptacle TEST Button, but not with GFCI Outlet Tester Tool
0
Can I use a USA GFCI Intex Pool pump in New Zealand
0
GFCI outlet with led light not on but have power
5
GFCI seemed to fizzle and pop, and now works as a non-GFCI outlet - what happened?
1
GFCE-protected outlet trips, GFCI outlet doesn't
2
Double Pole GFCI - Pool Rewire - 120V trips GFCI
0
GFCI Protected Outlet Trips with GFCI Outlet Tester, but the outlet lost power
0
GFCI outlet trips when one one device is plugged in even when it is off