What technique should I use to remove rubble from earth, using a small excavator?

I've a patch of earth - mostly fairly sticky Gloucestershire clay - which our previous builder has left mixed up with bricks, larger lumps of concrete and who knows what else. I want to level this and leave enough earth on the surface to let wildflowers and perhaps grass grow.

I'm not expecting this to ever turn into a beautiful lawn, so I'm quite happy to have a go myself with a smallish excavator. The particular bit of land will end up hidden behind a coppice so it needs to be made tidy but not perfect. It's about 30' by 70' in all, with a few trees, and on a slight slope.

Can anyone share techniques on how best to approach this? Should I consider hiring a driver with the digger, or is this feasible as a DIY job? I've used a digger for a weekend before on a lighter job but nothing quite on this scale.

My yard is of similar size, and I had the same problem: rocks, concrete blocks, and trash. With no previous experience, I rented a Toro Dingo with a few different attachments. 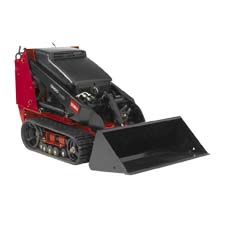 The attachments I used were: 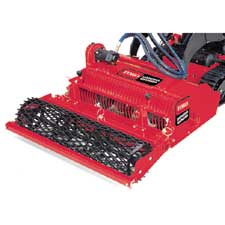 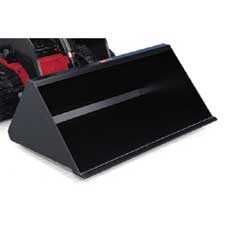 It took me about eight hours for a yard of about the same size as yours. That included adding 20 cubic yards of new loam on top. The rental charge was about $400 including delivery and pickup. It was reasonably easy to make the yard flat, but much harder to make it level because I didn't have any level ground to start from. If you need your yard to be level, I would recommend hiring someone.

I'm no expert on this but I'll throw in my two cents. If you were looking to make this into a manicured lawn I'd recommend bringing in topsoil to cover up all the junk. But since you're not, instead of an excavator I'd look into renting a compact tractor with a plow and a rake attachment. Plowing will bring most of the junk to the surface and you can remove the bigger stuff by hand. Then go around with the rake to smooth things out. If you set the rake at an angle and go around in a spiral pattern starting at the perimeter, the bricks and rocks will all collect in the center. Then you can pick them up with the loader bucket on the tractor and move them to some out of the way location like your neighbor's yard.

The only real way to do it is to screen it -- you use a series of trays and screens of varios sizes so that only soil smaller than a given size can pass through.

When I did a small patch at my home, (putting in a french drain), I used a bread tray that I had fit with ~1cm hardware mesh to reduce the size of the holes, but that took two of us to shake it, and a fair bit of work. If I was doing a large amount, I'd build something to suspend the frames, so you could load a bucket of soil in, shake it, then dump the screened debris to the side (as the soil will fall straight through).

The clay is going to bring other problems -- if you don't load the screens too much, and get the rocks bumping into each other, it will hopefully knock off the clay, and fall through; if you want to be really thorough, you'd wash the dirt through the screen (eg, if you were trying to do a soil analysis, which you're not), but it'd make a real mess, so I wouldn't recommend it.

From the sounds of things (sticky clay) this will not be fast work. I'd try to figure out the technique just digging by hand, and test everything to find out how fast things will go, and then consider getting some friends in to help shake the trays, move the finished stuff around, etc, so if you are renting a machine and/or hiring an operator for it, you don't have to go through the learning process while you're wasting time on the excavator.

You might have to deal with more than one layer -- if there's an obvious topsoil layer, and a clay layer, you'll want to handle them separately, so you're not putting too much clay on top for planting; for this it might be worth hiring someone experienced who can be more precise in the removal. (I'm not sure how difficult it is to operate the excavator, but if you're spending the first few hours trying to learn how to do things half-decent, it's potentially a lot of lost time if you're trying to get this done over a weekend) Hopefully, an experienced person will also do less harm to the roots of trees -- if nothing else, their experience might tell them how close they can get before you have to switch to hand tools.

Not the answer you're looking for? Browse other questions tagged excavator gardening or ask your own question.

2
What kind of soil mix to use for grading the perimeter of house to keep water away from basement?