Is there a cost effective way of sifting stone in a driveway?

I have a 2,500 sq ft section of parking area next to my driveway.

It is composed of 3 ft of sand covered with about 6 inches of crushed limestone rock.

Over the years the ants, weather, and weeds have caused the stone and sand too turn and mix. I need a method or piece of equipment to sift out the stone and bring it back to the top.

It's generically called a screen, and they range from a wooden frame with a section of metal mesh on it that you shovel mixed material on, which sorts itself by gravity, on up to a mechanized thing on the back of a tractor trailer with a bunch of conveyor belts to take in mixed material, then sort and distribute the various sizes.

Depending on your workforce and budget, you might be looking at a version that's somewhat like the one you shovel through, but sized for a skid-steer loader or larger front-end loader. The mechanical wonders are nice, but expensive, and I doubt your job is large enough for someone to haul one in and set it up, at least economically. 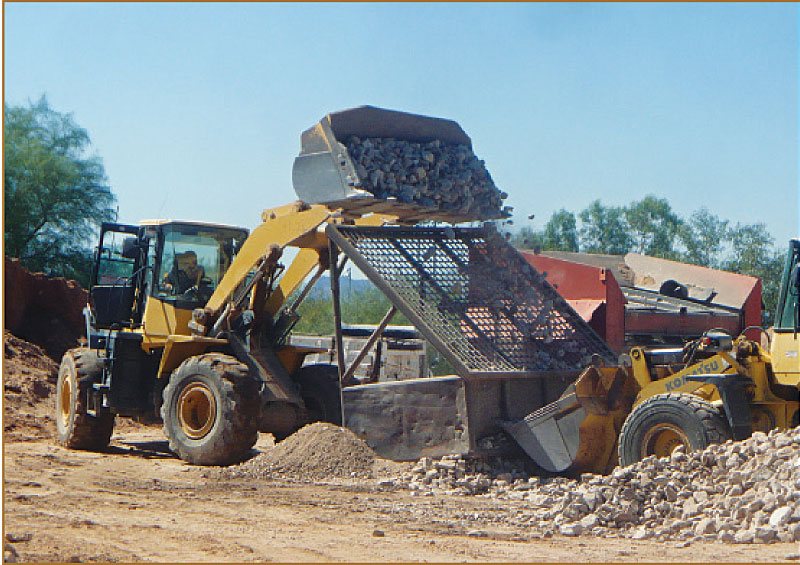 Picture found at aggman.com, though it's off on some blog platform with a different address.

After you sort out the rock and level the sand, put down geotextile fabric to prevent the sand and rock from mixing before you put the rock back on top.

Since your comment implies that you'll have at this with a shovel, rather than renting machines or hiring someone with them, I'd suggest dividing the site into a grid so you can do a manageable section and then move to the next section.

Here is a much smaller skid-steer loader and a screen suited to it, that could be easily moved if somone in your area has something like it and wants to work: 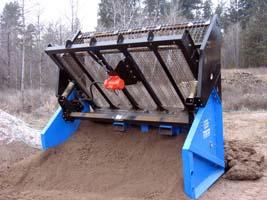 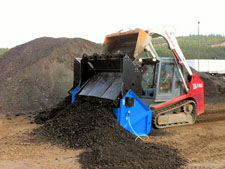 I don't know that you'd want to use it for dealing with something as large as a driveway, but when I've had to sift rock out of a large amount of dirt, we built a two-person frame using:

The bread tray is wider than the concrete mixing bin, with rather wide holes in the base, but it's enough to support the hardware cloth. With two people on either end of the mixing bin, you can pull/push the tray with even a large load of gravel on top of it and shake it until the smaller material drops through the screen, then lift it up to dump it.

Of course, I happened to have the bread tray that sat at the loading dock of the office building I worked. You might have to try to buy one off of a bakery delivery person.

Not the answer you're looking for? Browse other questions tagged driveway gravel or ask your own question.

4
How do I safely clean my paver stone driveway?
4
What size gravel works best for a driveway?
3
DIY way to wash sand/clay out of driveway gravel?
0
Can I build a gravel driveway over sand?
0
Drop height from Exterior door to driveway
1
How do I reduce dust from driveway made of stone dust?
4
What to use to harden up a gravel driveway
1
Is chert a suitable base for a concrete driveway?
1
Dirt Driveway Repairs
1
Driveway Erosion Problem