My closets are the kind with door doors, either of which slides to the side, overlapping the other. I'd like to have the light inside the closet come on when either of the doors is opened. This is for new construction - how do I wire this up?

From a functional point of view, you want the two switches in parallel, normally-closed but held open when the door is in its closed position, so that if either door is open the switch closes and the light comes on. The switches may control the light directly or, if they are low-voltage switches, may control a relay which controls the light. (If you're using a relay, you can also potentially substitute a pair of normally-open switches in series; just use the inverted relay output.)

Mechanically... The switches I'd normally think of for this purpose either wouldn't be reliable or wouldn't be pretty. The best thought I've got is a low-voltage circuit, using alarm-style reed switches. These would involve switches mounted on the door frame with magnets mounted on the door edge nearest the frame. When the magnet is close enough, it pulls the reed in the switch out of its "normal" position. The advantage of these is that the magnets will tolerate a bit of gap rather than having to come directly in contact with the switches; how much gap depends on exactly which switch/magnet set you buy.

I could make it work... initially. Keeping it working, given how notorious these doors are for going out of alignment and slipping off their tracks, might be another matter.

There are standard switches for closet doors 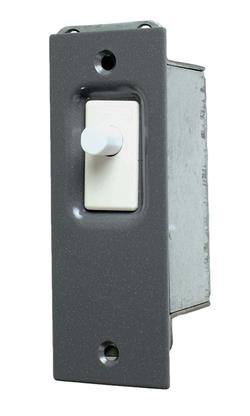 They can be mounted in a cutout in the jamb, one for each door on each side.

For your purposes, you want normally closed switches (makes contact when no pressure is applied). Many can be wired either way. When the door is slid back into the switch, the circuit opens and turns out the light.

Would you try a motion sensor inside the closet rather than a jamp switch? That would allow the bypass sliders to close either way, and the light would go off after a certain time whether the doors were tightly closed or not. The motion sensor would trigger when one reached in to the closet, but getting it to come on reliably might be a bit finicky.

7
How do I put a fluorescent light on a motion sensor?
4
Is it okay that a Leviton 9860-LHG CFL lampholder has no ground wire?
3
What kind of light can I install in a small, low-ceiling coat closet?
3
How can I have a light turn on when a pocket door is opened?
0
How can I install a motion sensor for a closet light?
1
Re-done rooms now much hotter
1
Installing a New Electrical Outlet in a Modified Closet?
1
Can I add a light fixture (with a switch) to an existing switch/outlet circuit?
1
How To Replace Broken Light Junction Box in Ceiling