What's the recommended procedure for converting a single circuit light switch into two switches for controlling a bathroom fan?

I think my question might be similar to Controlling two fixtures on same circuit independently but I don't need anything as fancy.

Summary: I'm remodeling a bathroom. Presently it has one switch which controls a single light. I want to add a vent/fan.

Is there an easy way to wire a second switch off of the same circuit and have one switch control the fan while the other controls the old light?

The walls will be exposed so it should be relatively easy to run additional wiring.

No problem at all.

Power at the switch

If the power feeds into the switch box, you'll simply pigtail the ungrounded "hot" conductor to feed each switch. Then you'll run 14/3 or 12/3 nonmetallic sheathed cable (Type NM); whichever is appropriate, between the switch box and the ceiling outlet. Then connect the white (grounded "neutral") from the feed, to the white (grounded "neutral") to the ceiling box. Connect all the bare/green grounding conductors, and don't forget to ground each switch and the box if it's metal. Connect the black wire from the cable that runs to the ceiling, to one switch, and the red to the other switch. 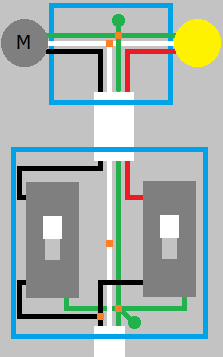 Power at the light

If the power is at the light, things are slightly more complected. But it's still quite easy. Again you'll need 14/3 or 12/3 cable between the switch and ceiling. You'll still connect all the green/bare conductors together at each place, not forgetting to connect all devices and metal boxes. In the ceiling, connect the white (grounded "neutral") to the white wire from the light and fan. Put a piece of black tape around the white wire from the cable between the boxes, and attach the wire to the ungrounded conductor of the fan or light. Connect the red (ungrounded "hot") conductor from the cable between the boxes, to the ungrounded conductor of the light of fan. 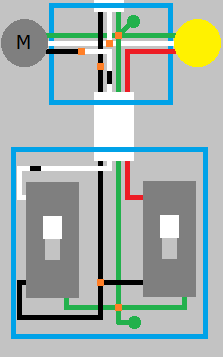 In the switch box, cap the white wire (unless one or both of the switches requires a grounded "neutral" connection). Connect the blue wire to one switch, and the red to the other. Splice the black wire, and connect a lead to each switch. 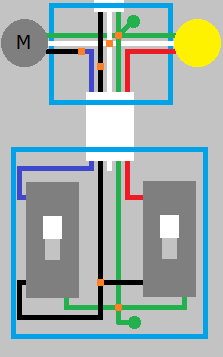 Not the answer you're looking for? Browse other questions tagged electrical bathroom or ask your own question.