How much ceiling fan wobble is acceptable? [closed]

I've got 3 flush-mount ceiling fans. The large one (well, when it was working, the motor is seized up now and needs replacement) has always been rock solid. No noticeable vibration/wobble in use. Pushing on it, there's not any play at all in the fan assembly or mount.

However, the other 2 show some vibration (very minor wobble, barely noticeable). Both of them are smaller fans and the mounts show more play when I push on them. They also have lights (which the big one does not). So, they're heavier, hang down further, and have smaller mounts... Just what one would expect to lead to less stability even under ideal conditions.

In the Kitchen it doesn't seem to have any ill effects (other than if you look close you can see a little motion), but the bedroom fan makes just enough motion to generate a "tick-tick" sound. It also has a much wider spread of lights, so it's more noticeable. Doesn't bother my wife at all, but makes me wonder at what point does it become a problem and require rebalancing. As it stands, the rebalancing instructions I've read aren't helpful as it's not wobbling enough to determine where to place the weights... 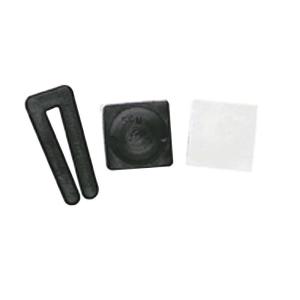 The kits allow you to experiment with a temporary weight (the U shaped slide) before mounting permanent balance weights. It is a trial and error process, but not overly difficult.

You start with the temp weight very close to the motor and test each blade to see if it helps. If you find one that responds well, you then experiment with moving the temp weight further out until you find the sweet spot.

If the initial close placement does not show improvement on any blade, you repeat the process on each blade with the temp weight a bit further out.

I have found, in dealing with over a dozen fans in my three houses and my son's house, that wobble is a matter of your taste; if it is minor as you say. I had had several fans that refuse to balance no matter what I do or how long I work on them. One was on a four foot pole from a vaulted ceiling. Then I realized, or someone told me, that the reflection of the air off the ceiling, in summer setting, might be making the fan wobble; so I gave up when close.