How to fix a deck railing that is falling off?

I have an older deck that has a wide (approx 25 feet) unsupported span. The railing on the deck seems to be pulling outward, probably due to planters on it, and general heavy usage. The underside of the deck has fairly good support via two by eights. It appears that the railing is attached via nails only.

I need to figure out how to reattach the railing in a way that won't come out again. My first thought is replace the nails with bolts, but I'm not sure if I need to also replace the railing's wood. Would bolts work? How do I determine if I should replace the wood? 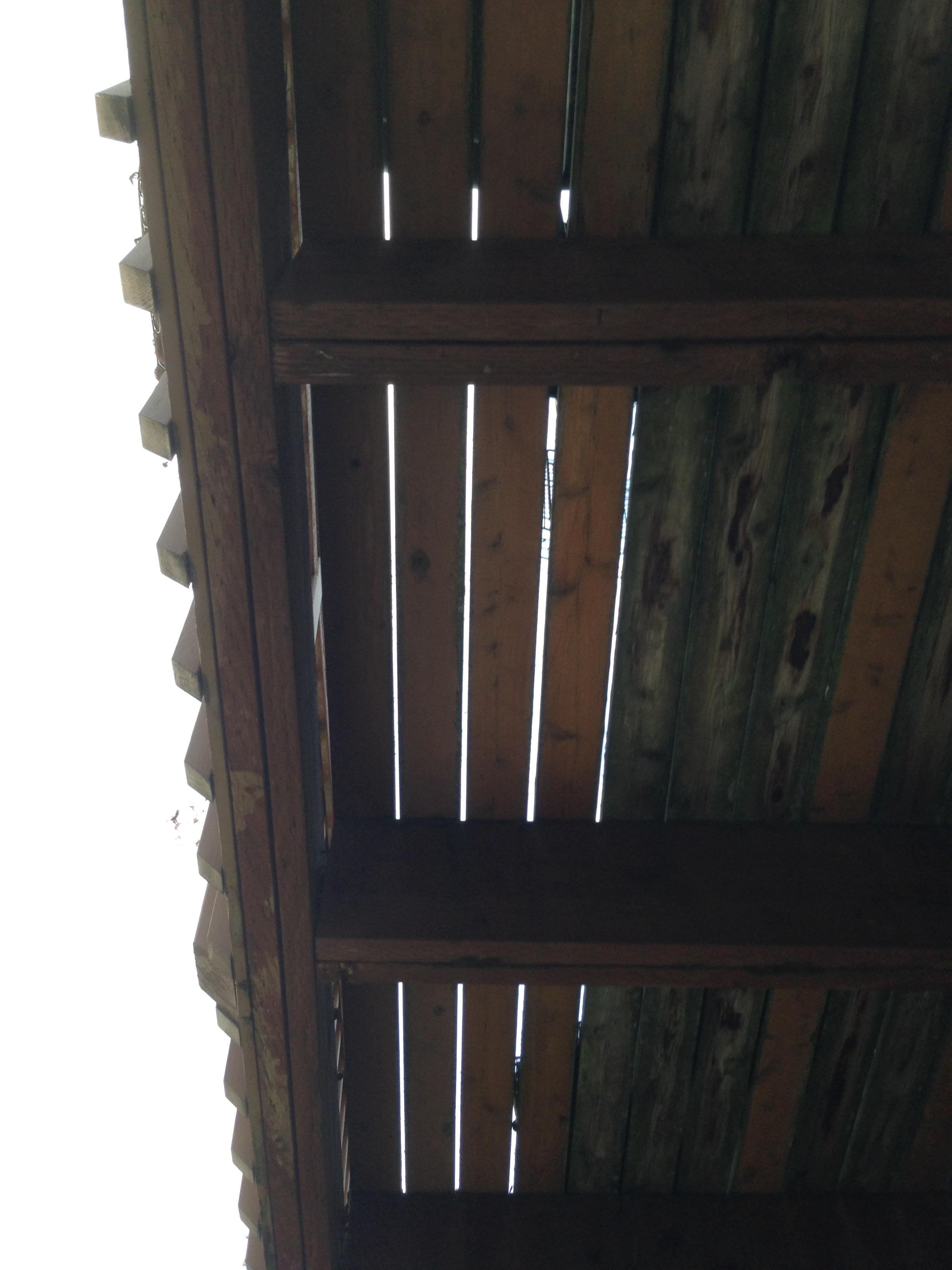 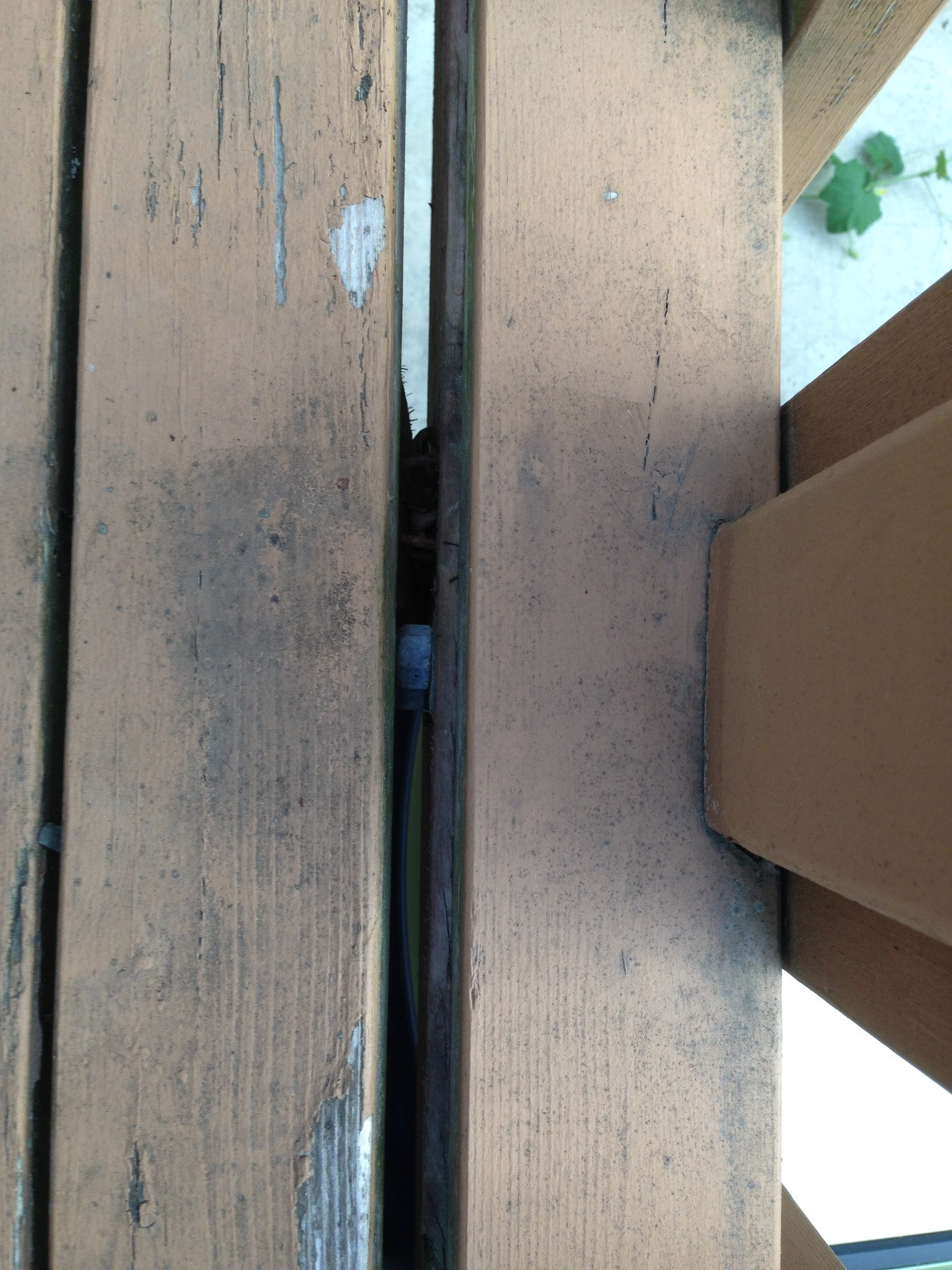 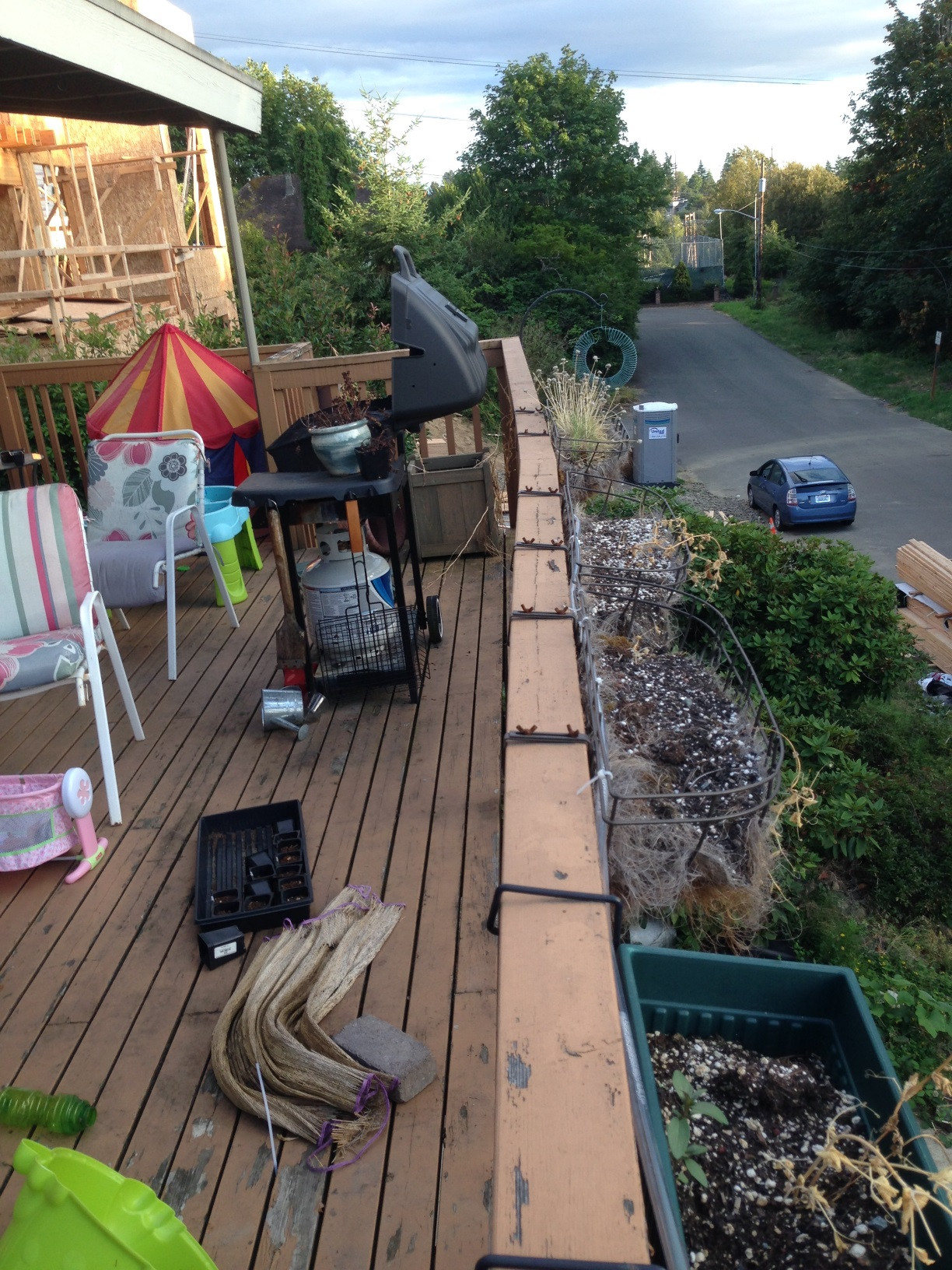 It appears that the rim joist to which the railing is attached was nailed/screwed into the end grain of the floor joists. This is an exceptionally weak connection and why toe nailing is standard when fastening perpendicular framing. If this is the case, new screws or bolts won't really change anything.

My recommendation is use framing connectors such as those manufactured by Strong-Tie and USP. These come in a variety of configurations such as angles and plates. They are also manufactured in a variety of sizes, gauges, and to receive varying numbers of fasteners. They are reasonably easy to install for even a casual carpenter and reduce the likelihood of splitting the wood members and struggling with bent nails. This comes at a higher material cost, but not of the sort that will break a reasonable budget.

It appears that the rim joist is pulling away from the joists to which it's nailed due to the outward forces on the railing.

You could screw the rim joist to the joists (where those nails are now), which might give a bit more holding power, but you wouldn't gain a lot. Using lag bolts in this situation should be avoided because they won't hold well in the end-grain of the joists.

I'd suggest adding angle brackets like these, on both sides of each joist. Offset them slightly vertically so the screws from either side of the joist don't interfere with each other. Use an appropriate screw length (2.5 inches would work for double joists).

The 4x4 posts for the railing are connected to the rim joist with bolt(s). If these 4x4s connect next to one of the joists (ideally it would, and the one shown in your pictures seems to be), then you could add a deck post bracket if there isn't one already which transfers the railing force from the bolt to the joist. This would replace the aforementioned angle bracket on one side of the joist.

Forget angle brackets, they aren't designed for that direction of force.

The images are mine and how I do it, and I'll tell you they are solid railings.

Bolt your railing to the rim board and bolt the rim board to the joists with tension ties (or deck ties). If you can do it through the railing posts, it's better, but not necessary) 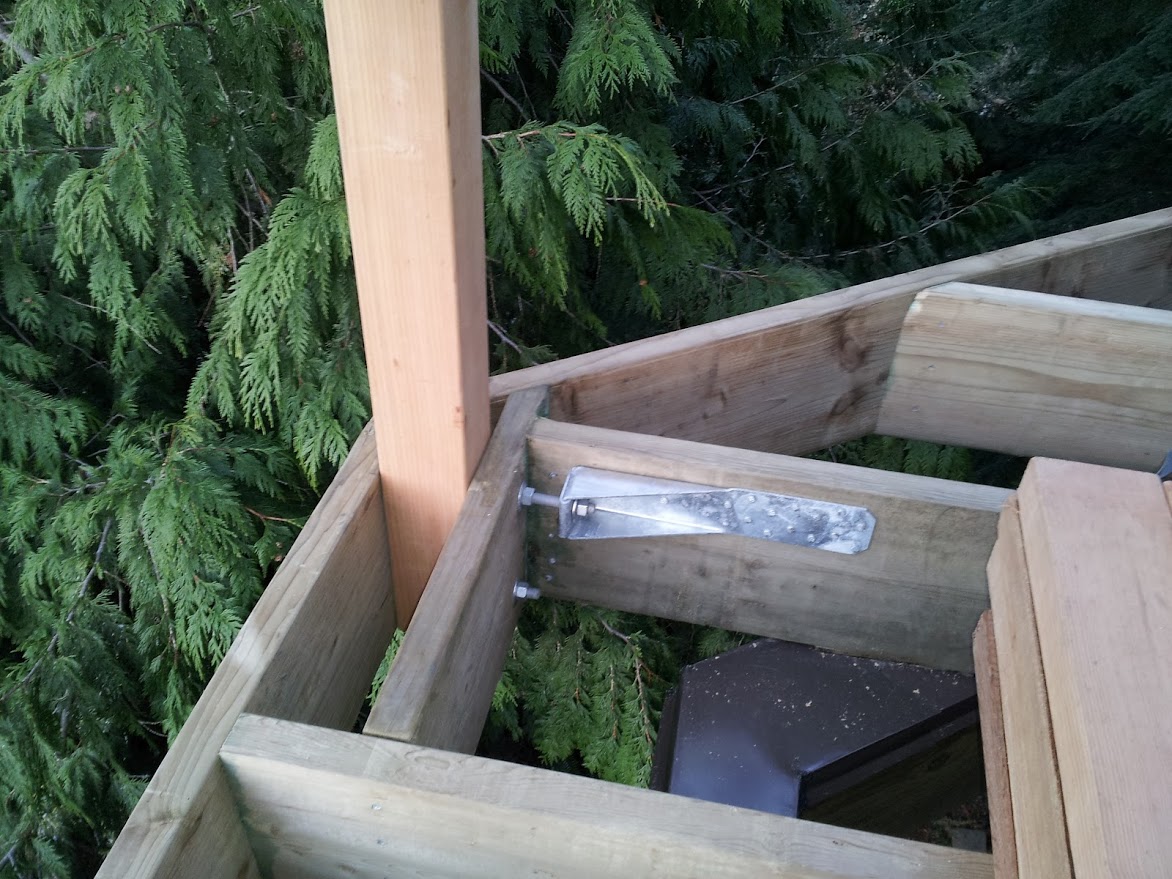 You can't tell in the images but you leave a small space between the end of the tie and the rim board, 1/4" or more is fine. 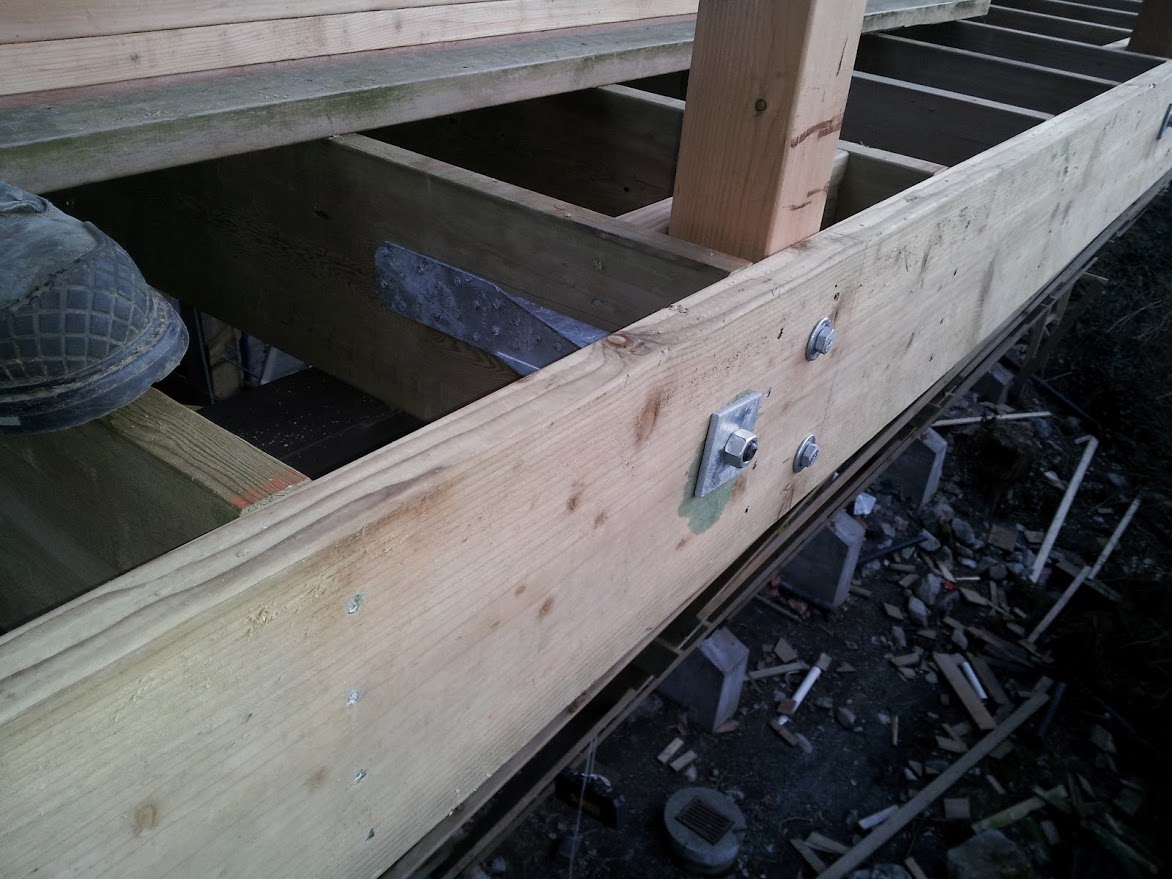 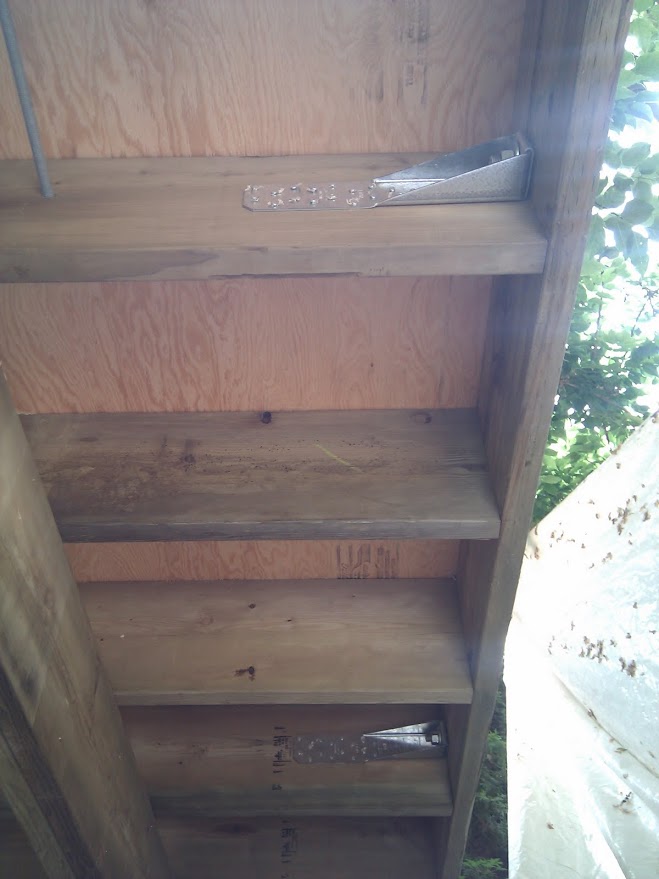 On the side where the rim is parallel to the joists use blocking and tension ties in both directions or use threaded rod. 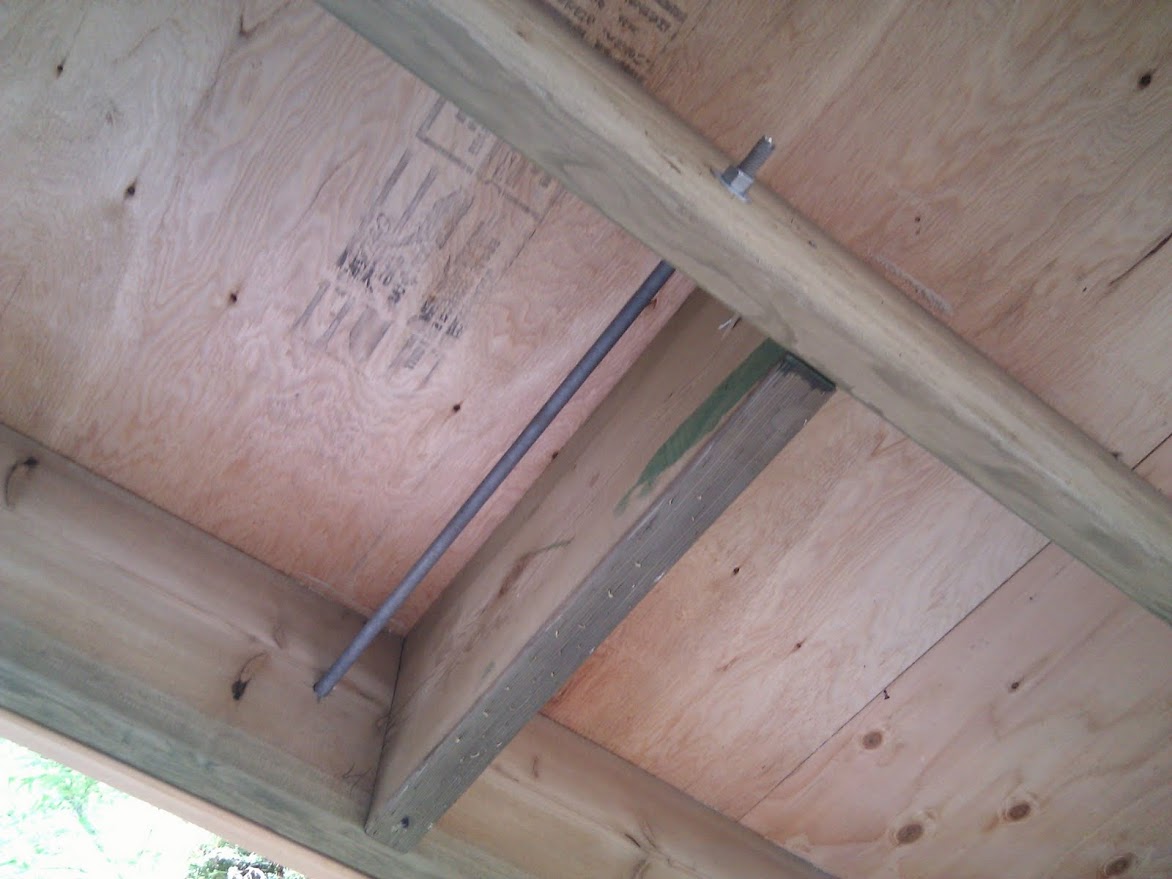