What latch would work best for a front/top opening chest?

I'd like the latch to be spring loaded. It does not need to lock. I would like it to latch itself when the chest is closed, rather than needing to pull the spring back then move the front into place.

I was thinking of something along the lines of a laptop lid, where there's a hook that latches itself when closed, and a lever to slide the hook out of the way so it can open. The catch plate would be on the bottom, and it would latch when the top/front is put down (rather than the front being swung into place alone). I wasn't able to find anything like it online, probably because I have no idea what it's called.

The other idea I had would be to use something like a door latch on both bottom corners, which would latch when the front is swung into place. Instead of a knob, you would slide the latch open. Like this but furniture quality.

I really do not want something industrial/utility looking like this.

Can you help me locate something like what I'm looking for (or something better I haven't thought of)?

(I don't know much about hardware terminology, so please forgive me...) 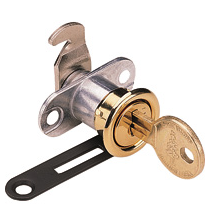 You can find it here.

How strong does the catch need to be? Would Rare Earth Magnets suffice? You could counter sink them into the wood and super glue or Epoxy them in place. I would recommend a very strong glue because these magnets are ridiculously powerful.

Not the answer you're looking for? Browse other questions tagged furniture hardware or ask your own question.

1
How do you remove a dummy knob with a screw that seems to spin and spin?
3
What options are available to hide a TV in the bedroom?
5
Can I use a single cable for cable rails?
2
Lock type for a door on a large box
2
Building a table with outlets
1
Lid lock for outdoor chest
0
13ft wide desk/workbench with only one leg
0
Hanging microwave without above cabinet