What type of insulation should be used to deter subterranean termites?

My house's structure is made of wood and there are subterranean termites (non-formosan) in my yard and area. I am planning to excavate and insulate the slab perimeter in the interests of saving on heating, but am worried about creating a termite highway. I figure XPS is right out, and I'm not sure about termite-treated EPS either. The availability, price per R, and ease of installation are attractive, but since the advertised termite resistance just comes from a chemical treatment, I worry that it will fade or leach out over time.

I've considered foamglas, which would be ideal due to its many desirable qualities, but it's ridiculously expensive compared to the alternatives. What about rigid mineral wool boards? I see people online claiming it's resistant to termites, but I've been unable to locate any real confirmation or denial of this. My sense is that the mineral wool industry would be advertising this if it were true (as the foamglas industry does). So what's the skinny?

A while back I did what you described–I dug out my stem walls down to the footings. Then I wire brushed the walls clean and painted them with a concrete sealer. Then I insulated.

I considered high density ccSPF but it's quite expensive. So I installed two 2" layers of XPS foam because it's the least absorbent. Then I installed a sticky fiberglass mesh to the XPS and troweled on an 1/8" layer of Tuff II Foundation Coating. Tuff II is primarily used above the soil to protect the foam but I went down to the footings to prevent the gravel and any tiny mouths from tasting the XPS.

Between the foam and soil I filled the trench with drainage gravel, to keep moist earth distant from my insulation and walls. Had I ever seen a termite near my home I'd have added a layer of scoria or that special sand that's supposed to deter them. I set landscaping fabric between the gravel and soil to keep the soil out of the gravel layer.

While backfilling, I also graded the ground around the house. After properly sloping the soil to drain away from the structure, I laid a 6' strip of 6 mil plastic over the grade. I covered the plastic with scoria and decorative gravel that my wife and kids picked out. The sloped plastic layer pushes water out away from the house before it can start percolating down.

It's only been one winter since I did that work but so far, so good. My basement walls are warmer, there's no evidence of unwanted biologicals invading my XPS or home, and my sump pump hasn't run in two years. I don't have a way to measure but I expect my stem walls moisture content is lower than in the past too.

I can verify boron treated EPS degrades over time. Boron is water soluble, so the treatment doesn't last through more than a couple wet seasons. 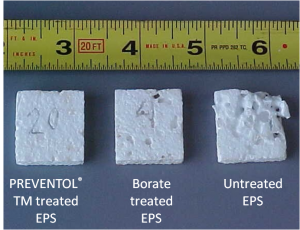 There's apparently a new insecticidal treatment being sold under the trademark Preventol. It's unclear how many years this treatment will remain effective. In any case, I think soil treatment should be used whenever EPS is installed below grade to help long-term repel insects.

The foamglas product looks interesting. It's made of silicon instead of polymer. It would still be nice to see a long-term test, though. Until someone buries it for a few years, the claims of the manufacturer can't be verified.

The typical reason for specifying mineral wool in building construction is for fire-stopping because other materials tend to be more cost efficient insulators.

Water-repellent does not mean water-proof. Mineral wool unlike - EPS or XPS - can hold moisture. Once wet, the water will negate any insulating properties because water is an excellent thermal conductor.

In other words, unlike closed cell foams, Wools, mineral or otherwise, are porous. The fibers may not absorb water, but a board of wool may be saturated, ie the voids between fibers filled with water. It can be saturated with water from front to back to a degree unlikely with closed cell foams. Properly installed in well drained soil it will likely meet expectations.

The concerns over the termite resistance of treated EPS may be edge case particularly in light of the need for soil treatment and periodic retreatment. Here is a Dow study on treated EPS: http://web.ornl.gov/sci/buildings/2012/2007%20B10%20papers/153_Alcott.pdf

Not the answer you're looking for? Browse other questions tagged insulation slab termite or ask your own question.