What is this switch plate cover with a pyramidal bulge across the top of the plate?

We were trying to replace old switch plate covers at our new house when we came across one that is a type I've never seen before. It's a light switch cover that looks like an ordinary cover except for a small bulge above the switch that's maybe an inch across and half an inch tall. It's kind of an elongated pyramid shape. Removing the cover reveals two wires coming from the box (one from the top right, one from the bottom left) that appear to be soldered behind the lump. There appears to be a small piece of what looks like PCB board material, but doesn't show any features aside from the points where the two wires are attached. 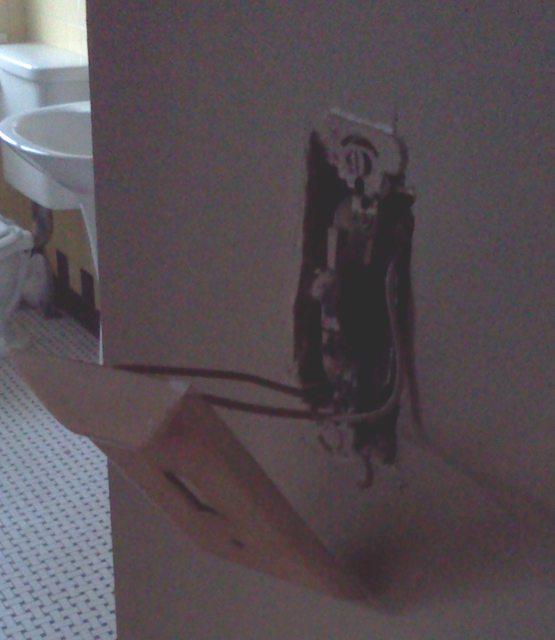 Does anybody have any idea what this is? I don't want to just yank the wires out (they are attached to screw terminals in the box) without knowing what they are supposed to do.

The house was build in the early 20th century, so the plate could be really old.

My guess is that it's an illuminated cover, which no longer works. Turn power off, disconnect the two wires to the cover, and replace with a regular cover. While you're at it, you might as well replace the switch.

Not the answer you're looking for? Browse other questions tagged electrical switch cover or ask your own question.

4
What's a good way to customize or recess a lightswitch?
2
How do I replace this switch with a dimmer?
0
What is this single pole switch to empty ceiling box blows breaker when switched on
3
Unused electrical duplex box, soon to be hidden behind a bookcase?
2
What is this electrical junction box? (re: adding 3-way switch)
1
Digital Switch for Gas Fireplace
2
Switch Plate too Thick
3
Nylon switch cover plate screws
1
Remove switch that controls thermostat
1
How do I wire a wifi light switch with wiring that doesn't match the install instructions?