A spark from a power strip recently made the electricity go out is it safe to turn it back on? 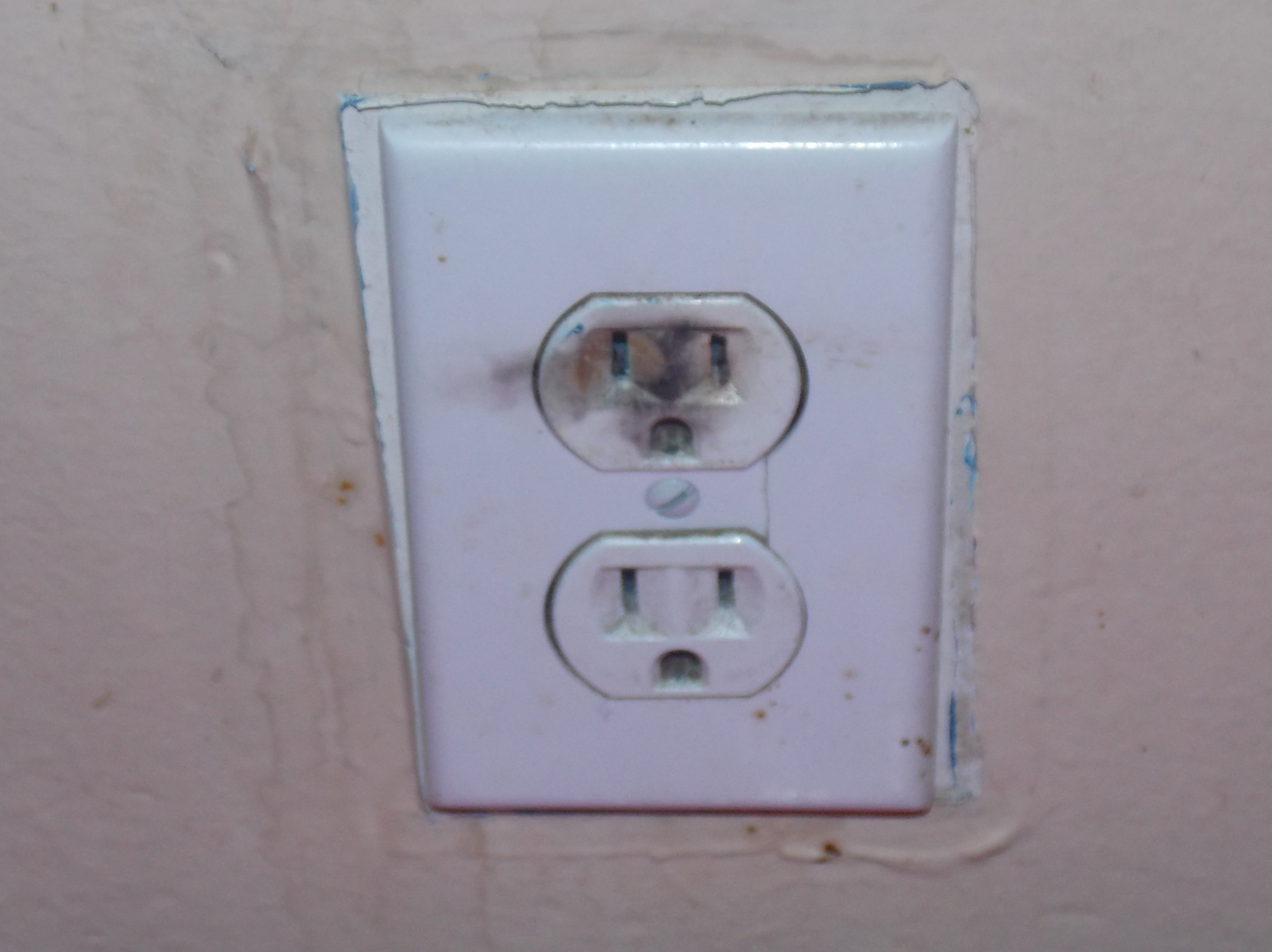 About a week ago my daughter plugged up her iPod to a power strip that was plugged into an outlet in her bedroom, she said she placed the iPod onto the power strip and let it sit there while she plugged it up, then it made a spark, and the electricity in her room went out. The iPod was burned on one side from the spark. So my question is, could it of happened just because she placed the iPod onto the power strip or could it be a bad power strip or is it the outlet? I haven't turned the power back on in her room because I'm afraid of a fire, but if its just the power strip then I could easily replace that. I can't afford to call an electrician right now and would like to be able to get her back in her room with out worrying about a fire. (Update) 8/5/14 Since I posted this, my daughter told me the power strip was only plugged half way into the wall when this happended, I also just noticed the outlet looks like its been burned, The power strip looks normal. The iPod still works and we are still using the same charger in a different outlet. Thanks.

The metal casing of the iPod caused the power strip to short out. The breaker did it's job in tripping when it sensed two much current on the line. The iPod might live, might not. But it is safe to see if it does. The power strip, even it if works, is dead. Throw it out. The circuit should be safe to turn back on.

I say should, because if was wired to code, and done correctly it would handle the current before the breaker tripped. If an oversized breaker was used on undersized wires or outlet, either/both the wires or the outlet could have failed as well. If you question the electrical work done in the house, then play it safe until you have an electrician, or even a handman friend, do a visual inspection. Or if you feel comfortable, remove the plate off the outlet and do an inspection. With the breaker still off, remove the cover plate and inspect the outlet. If you see scorch marks or evidence of smoke, you will at least have to replace the outlet. If feel even more comfortable, remove the two screws that holds the outlet to the box. Carefully pull the outlet out and inspect the wires behind. Again, looking for scorch marks inside the box and also look at the wires. If everything looks good, carefully push the outlet back into the box and re-screw. Replace cover and turn on the breaker.

I would suspect your daughters iPod charging port has shorted. It is not uncommon, and a known issue with late model 4-5 phones and pods, but heavily denied by Apple. While her room's circuit is off, unplug the iPod and power strip. Then turn the circuit on and test it out with something that is known to work well, a lamp, or if you want something to pull some current, try a blow-dryer. If everything works well, try the power strip with a lamp or something else. Finally, since your ipod is already scorched from shorting, get it replaced under warranty, or not if water was the cause of the shorting (good chance of this, ask your daughter.).

Toss the power strip and turn the breaker back on - you'll almost certainly be fine. The circuit breaker did its job by tripping, and you can reasonably expect it to do the same thing if you get another short or arc fault. When you replace the power strip itself, make sure that the one you get has its own over-current protection.

2
how can i find electric short from room to fuse box?
2
How can I run a coaxial cable into an existing single gang electrical outlet?
1
Why won't my clothing iron work in one outlet but works in others?
2
Duplex Outlet-Open ground only on top
1
Is it normal for a power strip/plugs to have a metallic smell?
2
How can I calculate if switching power strip on and off is safe
0
Why did power temporarily go out on one circuit?
7
Did I shock myself? Do damage to electrical wiring?