What could cause low hot water pressure in the shower only?

The hot water pressure in every other faucet in the house is fine, but in the shower it's a little more than a trickle. I removed the shower head and pulled out the cartridge (it looks kind of like this). 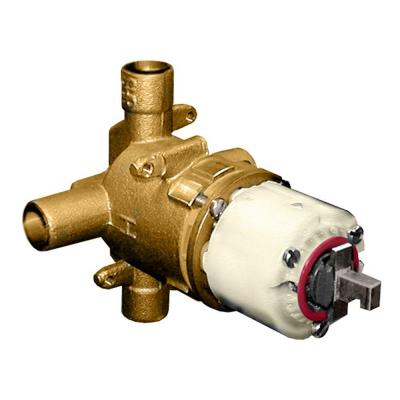 The water was only coming out of the left hole and it was hot water. There was no cold water coming out. It's a single handle shower and if I turn it toward cold there is plenty of pressure, but then if I move it back toward hot then at a certain point it kind of jumps a little and then loses all pressure.

I would first check the valve's anti-scalding setting. You have to take off trim and this is usually a setting on the valve outer stem. Make sure this is set to as hot as possible. This could have slipped. Next I would check the filters inside your valve cartridge. There is usually a filter for cold and another for hot. The hot filter could be clogged and need cleaning (very seldom do these need replacing except the rings).

Lastly you might need a new cartridge or to have yours rebuilt. If you know the model this might actually be easier than all of the other troubleshooting but often isn't needed. The cartridges can cost as little as $10 and up to a couple hundred.

As described, there is a restriction in the hot water line going only to the shower. This wasn't a complete blockage and some flow existed. When the shower valve was shut off, the slowed flow had time to build up pressure resulting in the "jump" described as the pressure build up was released and not supported by enough flow.

If this occurred after years of trouble-free operation, the most likely problem would be the failure of the shut-off valve (mineral deposit build up would show at other hot water outlets as well and therefore not likely the problem). Repair or replace the valve.

If this occurred right away or a short time after installation, it might be a defective shut-off valve or what I call sloppy plumbing and the plumber got something in the pipe during installation. I have encountered this when repairing a similar problem. It turned out that the plumber wasn’t careful to cover an open pipe when drilling a hole to run another pipe. The result was chunks of wood that finally plugged the shower valve. Another possibility is that excess solder from the sweating process somehow got stuck in the valve opening. Depending on the type of valves, it might be possible to open them up and use compressed air to clear the lines. Most likely the pipes/valves would need to be removed and cleaned or replaced. The process for doing this should be from the shower first and going toward the water source, checking the flow after each part of the line is removed if the blockage is found.

I'm not an expert and I'm only guessing based on too many hours of This Old House, but the fact that it "jumps" suggests that there's a mechanical issue. Inside that thing is a pressure balancing valve that keeps you from getting scalded when someone causes cold water pressure to drop by flushing a toilet or something similar. My guess is that the do-hickey that is supposed to equalize the pressure is instead cutting off all the pressure on the hot side.

According to Wikipedia, the thing has a diaphragm or piston to balance the pressures. My guess is yours is broken.

I would suspect that one or both of the water shutoff valves are closed. There is a mechanism inside of the valve cartridge which will close when there is no water pressure in either the hot or cold water supply. This is there to prevent someone from being scalded when there is a sudden drop in water pressure. If the cold, or hot is shutoff then it will reduce the pressure down to nothing, or a slight trickle. This is normal, as there is nothing wrong with the valve itself.