I'm reconfiguring my kitchen and moving some stuff around, which necessitates moving some outlets and switches. This is my first attempt at any kind of electrical work, so finding weird things makes me nervous.

It appears that my house (built in 1905 and remodeled several times before I bought it in 2004) used to have an electric oven. It now has a gas oven and a 110V 20 amp circuit that is supposed to power the electrical part of the oven (a clock and the ignition for the burners and oven) and a microwave/hood combo.

When I took off the oven faceplate, I found a 240V box behind it with big white and black multi-stranded wires (and a ground). It appears that someone used one strand of each of the big wires and attached that to the outlet's terminal screws. Then they used wire nuts and pigtails to run normal 12/2 (w/ ground) wire up to the microwave/hood.

How should I deal with the 240V cable that runs from the breaker box to the outlet? Do I need to pull it out and replace it? Is there a way to wire nut a 240V stranded wire to a 120V wire, and is that an okay thing to do? I realize that as long as the breaker is only 120V, the wire is just bigger than it needs to be, but I worry that someone might see the 240V wire at the breaker and try connecting a 240V circuit without checking for smaller gauge wire downstream. Best I can tell, the 240V cable runs in one piece from the breaker box all the way to the outlet. 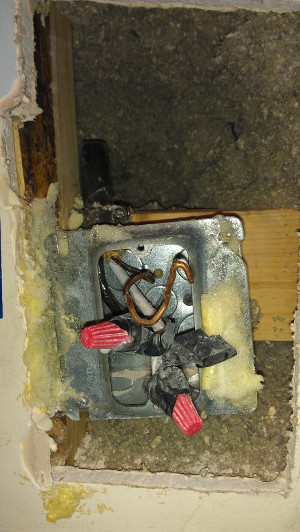 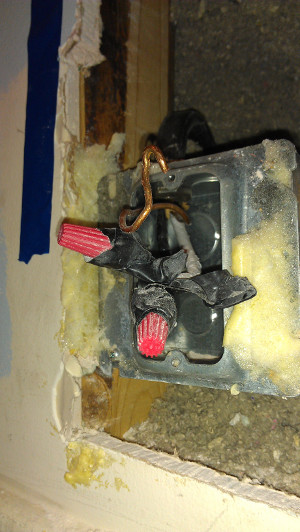 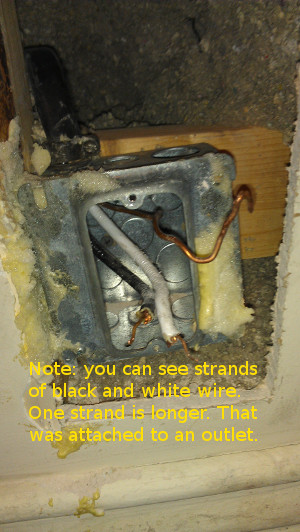 It looks like the cable was indeed originally run for a 220V stove.

When the stove was replaced with a gas stove, rather than run a new cable they just used the existing cable. This is fine as long as both ends are properly terminated.

I don't like the way they terminated the outlet though. I think they should have used a 12 AWG pigtail. ( assuming it was a NEMA 5-15 or NEMA 5-20 outlet ) Other than that I might have done the same thing depending on the difficulty of running a new cable.

If it is easy enough, I would run a 12 AWG cable from the breaker box to another box near the first with a NEMA 5-15 or 5-20 outlet.
Then either put an appropriate outlet on the existing cable with a 40A double pole breaker (assuming it is 8 AWG wire); or just put a blank cover on it.
If you do just use a blank cover, you should either ground out all of the conductors or remove the cable from the breaker box.
This way it can be left wired for both gas and electric stoves.

If it is difficult to run a new wire, I would just do what they did; except use a pigtail to connect the outlet. Don't cut back part of the wire, use an appropriately sized wire nut.

Having a 40 amp circuit (nominally 8 gauge copper wire or 6 gauge aluminum) extended with 12 gauge copper is worrisome. There are worse electrical faux pas possible in an old house, but the most expedient thing to do in this case is probably to replace the 40 amp ganged breaker with a 20 amp ganged breaker. That will provide proper wire protection from overheating and short circuits.

In theory that is simple, but in practice you'll probably have to use a short piece of 12 gauge into the new breakers and then wire nuts to join those to the heavier cable—unless you can find a breakers with large holes. That is okay inside the panel. That will also help signal future electricians that the wire is not 6 or 8 gauge all the way.