I was trying to mount something to a concrete wall and completely botched it. I had 4 drop-in anchors, so I took a hammer drill and some bits that were, by eye, pretty close to the diameter of the anchor, and made some holes for it. Well eyeballing it turned out to be a HUGE mistake, the hole diameters were just slightly too small and it cause the anchors to leak their lead (which, as I understand, is supposed to get pushed out by pressure to fill the irregularities in the concrete) into their own threaded screw holes. edit: actually that was just the inside of the anchors that didn't get pushed down far enough by the installation tool.

Now I've got 4 anchors stuck in the wall (one of them is still poking out a bit) that can't be removed, and the concrete has also become pitted from the attempts to insert them.

1) How do I fix this? I'm thinking of using a metal saw to take off the parts of the anchors that are poking out past the wall face, then spackling over or something. Seems simple enough but right now I don't trust my own judgement and want a second opinion.

2) How do I finish this? I was thinking of trying again a few inches further up, but the mounting is gonna have to support maybe up to 500lbs and I'm worried about the damage I may have done to the concrete below.

edit: here's a pic of the damage 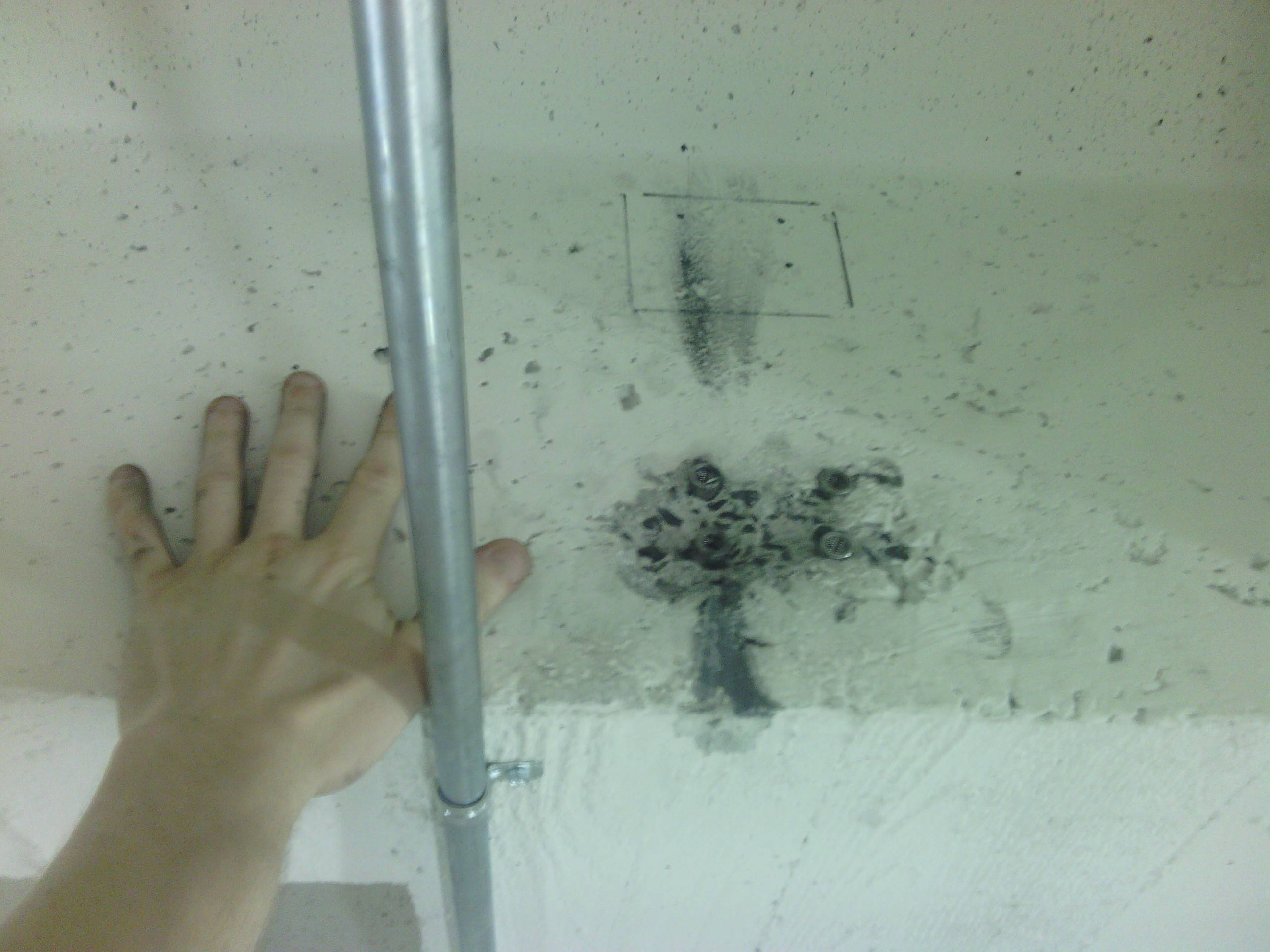 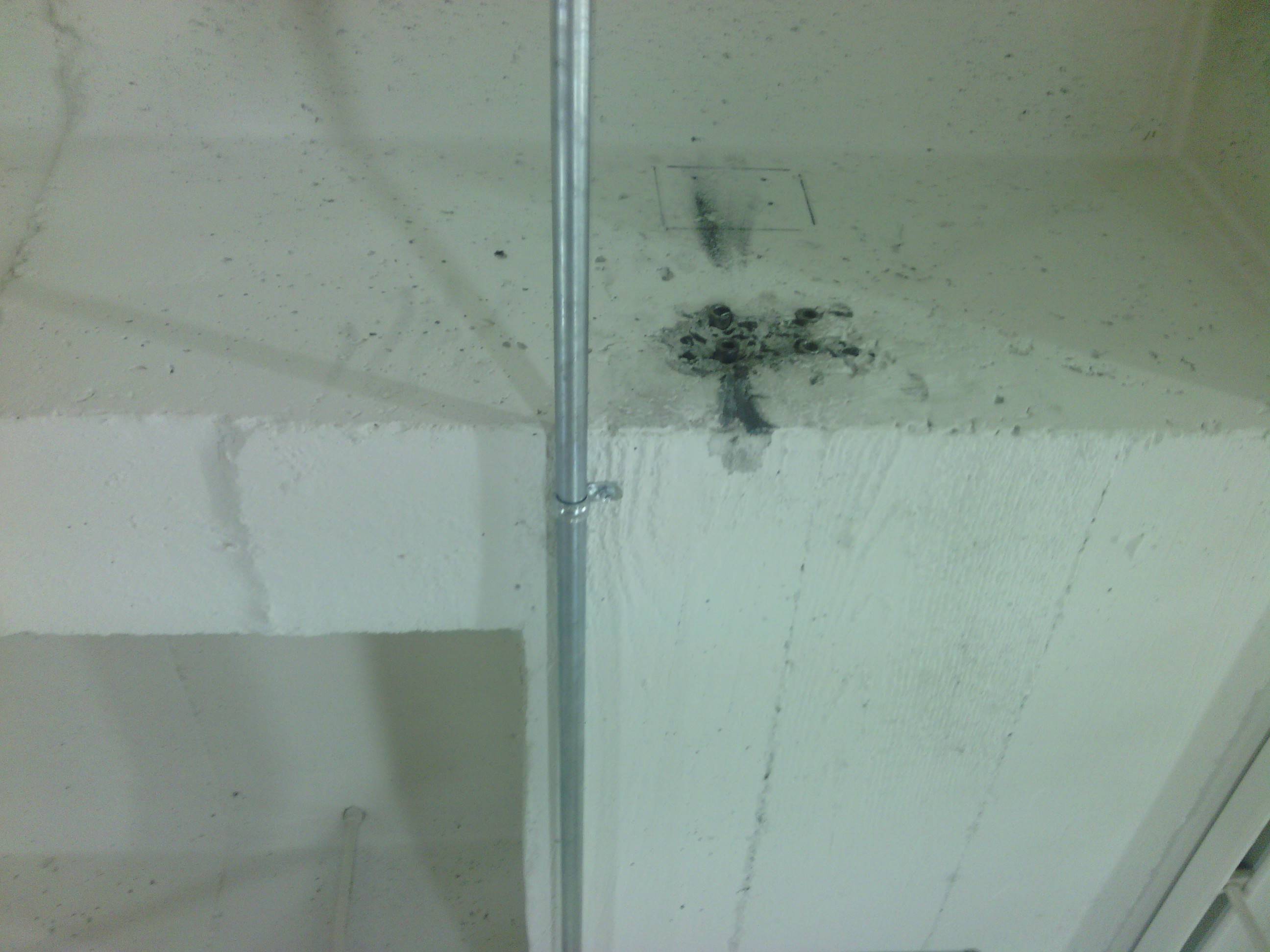 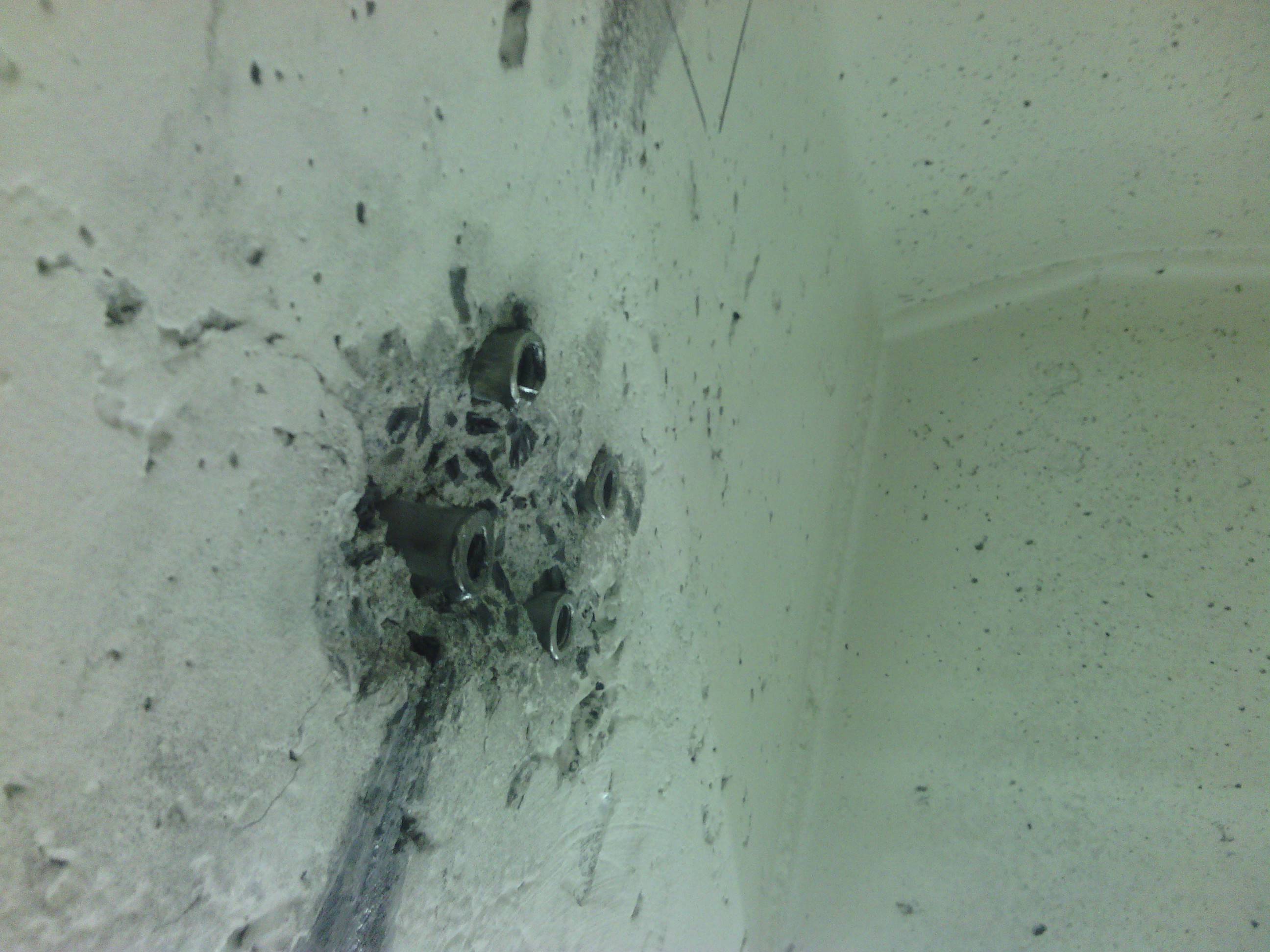 Those black pen marks are where I want to try again. It might be better to try again to the left but the concrete is thinner. I don't know if that matters. Any advice would be appreciated.

You should be able (with a cheap metal-drilling bit you don't love much) to drill those out and try again. Drill them out, use a correctly-sized masonry bit to drill the holes larger, vacuum all the dust out of the holes, and set new anchors. Perhaps set the anchors a bit deeper to compensate for the slight spalling at the surface here. You can use "hydraulic cement" to patch the surface, but don't expect the patch to take much of the load, so just put the anchors in a bit below the surface in the correctly-sized holes.

If you choose to abandon and move up the wall, that looks like plenty of room so that the old holes won't bother the new ones. Drill the anchors out and patch the whole area with hydraulic cement, in that case.

The concrete looks fine, other than a little surface damage (and obviously the holes themselves). I would drill them out, then fill the holes and damaged area with hydraulic cement.

Make sure you use the drill bit specified by the anchor manufacturer next time. These shouldn't be that difficult to insert into holes.

Not the answer you're looking for? Browse other questions tagged concrete or ask your own question.

5
How do I secure a canvas garage?
3
How wide does a 6x6 concrete post footing needs to be?
2
Will using concrete anchors in wall studs cause problems?
1
Can I drill a small hole in a concrete beam?
0
Sleeve anchors not going all the way in?
2
Mounting 2'x3' Glass whiteboard, drywall over concrete
6
Setting tack strip in concrete
2
How to keep plastic concrete screw anchors from spinning?
0
Anchors for concrete - what to use on a concrete ceiling?