What prevents the water from flowing in a 13mm garden hose?

I'm harvesting rainwater with this kind of device: 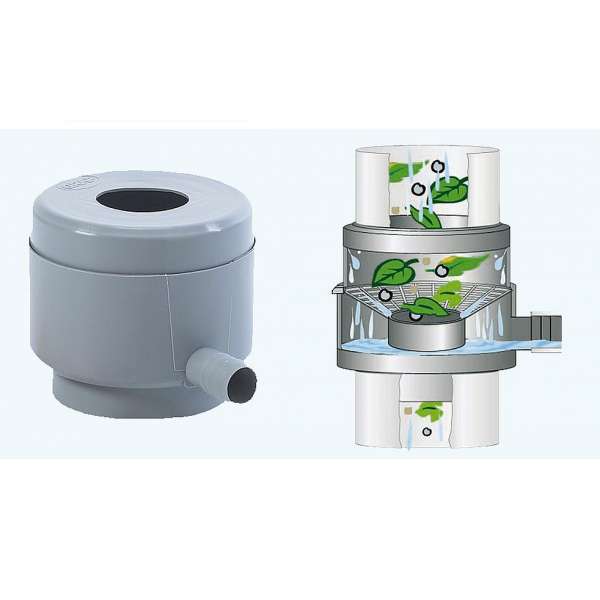 The same shop was also selling a rather expensive, clear, wide (maybe a diameter of 4cm) (like 200€+ for 25m) hose designed to work with it.

So instead of buying it, I decided to give it a try with what I had already: a cheap 13mm/15mm green, opaque garden hose.

The cistern where the water is flowing to is lower than the collection point, but still it doesn't work. I would like to know why.

Meanwhile, I kinda solved the problem by adding a 120L barrel just next to the collection point, and I drilled a hole and put a tap at the bottom of this barrel and plugged the 13mm hose in it. So as long as this barrel is filling slower than it is emptying, the problem is solved. I think it's rather unlikely that one day it will rain so much that it will fill faster than it can handle it.

So is it because of the air trapped inside the hose that the water won't enter in it ?

You've basically got it. Garden hose under low-to-no pressure is VERY sensitive to any dips and will stop flowing. I have personally run into this problem with dehumidifiers that have a hose drain on the outlet, where the hoses were extremely sensitive to how they were arranged, or they would just not flow. You also run into this when trying to start a siphon - if the hose is full of water, the siphon will work, but too many air bubbles breaks the siphon.

You seem to have arrived at a satisfactory solution with your barrel (which allows adequate pressure to build to push the air out of the hose) - you should also be able to make it work by (rather tediously) carefully arranging and supporting the hose so it has a constant downward slope with no dips and rises. If trying that, rigid pipe obviously makes it easier, being more amenable to maintaining a constant slope.

6
Why does my water pressure drop after using my water hose for a few minutes?
4
Can (and should) I replace the hose connecting a cold water expansion vessel to the cold water supply myself?
0
high water pressure in bathtub but not from the shower head!
0
Losing water pressure in water hose while washing vehicle
0
Cold water only dribbling from faucet
0
Suction hose in my watering system getting air. What can be the problem?
3
Can I connect two soaker hoses with a normal garden hose in between?
0
Can (inside) dripping faucet help prevent (outside) hose bib from freezing up