hoses instead of pipes

Quick question that came to my mind earlier today:

When installing a water system (concealed installation), why does one use pipes. It seems to me that hoses would be easier to install, more flexible and might reduce effects like rushing sounds.

If you look at the picture below you will see pex tubing. This has become the industry norm in some areas of the US - I know some countries have adopted similar things and some haven't. The compression fittings are supposedly made to last longer than than a soldered copper joints - jury is still out on that. Let's see what complaints there are in 10-20 years.

My problem with these is the drinking water. Copper does a great job of not letting bacteria grow in it and it has been used for years with no issues. All of the plumbing going to sinks in my house is copper. I use pex for toilets, showers, and things like that. 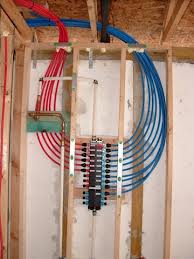 On the other side of the argument is the idea that PEX has issues in biofilm formation and passing on toxins/bacteria - California study here. This side, I don't really buy that much because you can read counters for most things. I just know that copper has a lot of good qualities and installing it isn't that big of a deal so will leave that for the main and drinking water.

Not the answer you're looking for? Browse other questions tagged plumbing water installation or ask your own question.

8
Is there a reason NOT to use a garden hose to hook up two faucets?

20
When installing hardwood floors, should I use rosin paper, roofing felt, or nothing underneath? Why?
2
What could cause my tankless water heater to make a knocking sound?
1
City replaced water meter, then bathroom sink pressure dropped, rusty water
0
Copper pipe going up to nowhere
0
What is the proper technique for starting a click laminate install diagonally that is floated?
0
Where to install a water conditioner?
0
Well Pump Setup: Best Materials to Use for Pipes