Why two breakers (one for the line, one for the neutral) on a single-phase line?

I'm wondering why in my house I have a tied-together pair of breakers (one breaker for the hot line, the other for the neutral) for one geyser, while my other geyser only has its hot line with a breaker on it, while its neutral is simply connected to the terminal strip with all the neutrals.

I don't need to upload a picture: the two breakers are really next to to each other and tied together (sold as one single two-pole breaker unit), so that the operating handle is common to both. If only one trips, the other is forced to do so as well.

So what is the need to have a breaker on the neutral? Are there situations where the overload will be felt only on the neutral and not on the live, or is it simply a trick to accommodate possible wiring errors down the line, i.e. somebody swapping by error the live and the neutral? My setting is a home single-phase 240V line, 15 amps breaker (was ok for the geyser alone, but I added a washing-machine and it now trips when using the washing-machine heating element. So that I contemplate changing it to a 20amps or 25 amps).

EDIT: I am in South Africa, and here is an image (the two-pole breaker we're talking about is the last on the left) 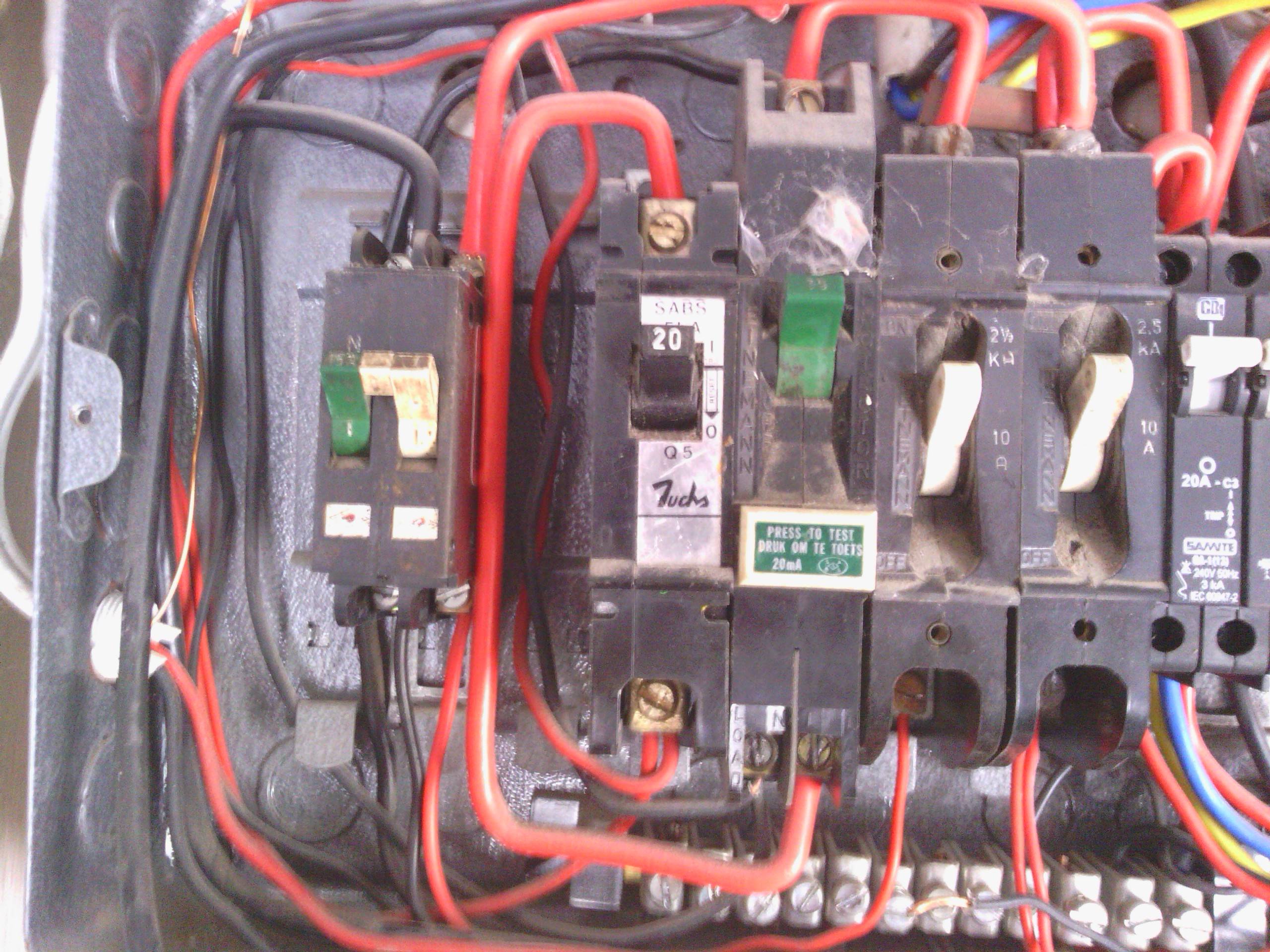 What you have is a 240V breaker and circuit. The white is NOT a neutral, but being used as another hot...which is perfectly fine and legal. Newer codes require such a white to be re-marked as a hot.

DO NOT replace ANY breaker with one that is larger. 99.9% of the time the wiring is appropriate for the breaker feeding it. Installing a larger breaker could create a fire hazard.

I checked that the cable truly powers only my 3kW water heater and the washing machine I added relatively recently (says that the max power of the washing-machine is 2250W, so 10A). And most importantly, I checked that the cables running to the bathroom from the main electrical panel are ok to bear a load of 20A: these are two rigid copper cables of 1.8mm diameter, so a section of 2.5 sq mm.

I have no idea if you're still paying attention to this thread, but those who have provided "answers" missed something, so I'll post now.

Some 240V countries use, in the incoming mains, an "RCD" -- "residual current detector," which is the same thing as us USA folks would call a GFCI. Head on down to your local Home Depot and pick up a single-pole GFCI circuit breaker and you will see that it has connections for the neutral to pass through it as well.

The OP here may very well have a combined main + rcd there, thus explaining the need for neutral to pass through it.

Not the answer you're looking for? Browse other questions tagged electrical protection or ask your own question.

0
Can I connect two phases on a single phase inverter?
1
Wiring Options for 14/3 NM-B Cable and Two Single Pole 15 Amp Circuit Breakers
0
Can I install Whole Home Surge Protector into two single pole breakers?
10
Is it safe to use two single-pole breakers for a 240 V circuit?
3
Acceptable voltage between earth, Line,Neutral - Single Phase
4
Possible to ground-fault protect both legs of a MWBC with two single-pole breakers?
1
Converting electric receptacle with one hot and two neutral wires to GFCI
5
Two opposite phase circuits in one conduit... do i need 2 neutrals or an oversized neutral?
10
20 Amp single receptacle on two 15 amp breakers?
1
Two breakers sharing same neutral?