How to repair leaking blower / air exchanger in attic?

Earlier this summer I went up into my attic to retrieve something, and was surprised to feel a cool draft. I discovered that a gap had developed between two portions of the big metal box that distributes cold (or hot) air throughout my house. (This box apparently contains both the blower, and the gas heater.) From the first picture below, you can see that a wire-mesh fabric had been pasted down with this white stuff that eventually cured to form a seal. But over time the seal here broke. In fact, it looks like some settling may have occurred, and the unit shifted about a centimeter to the right. (This is at what I'll call the "far left end" of the air exchanger.) 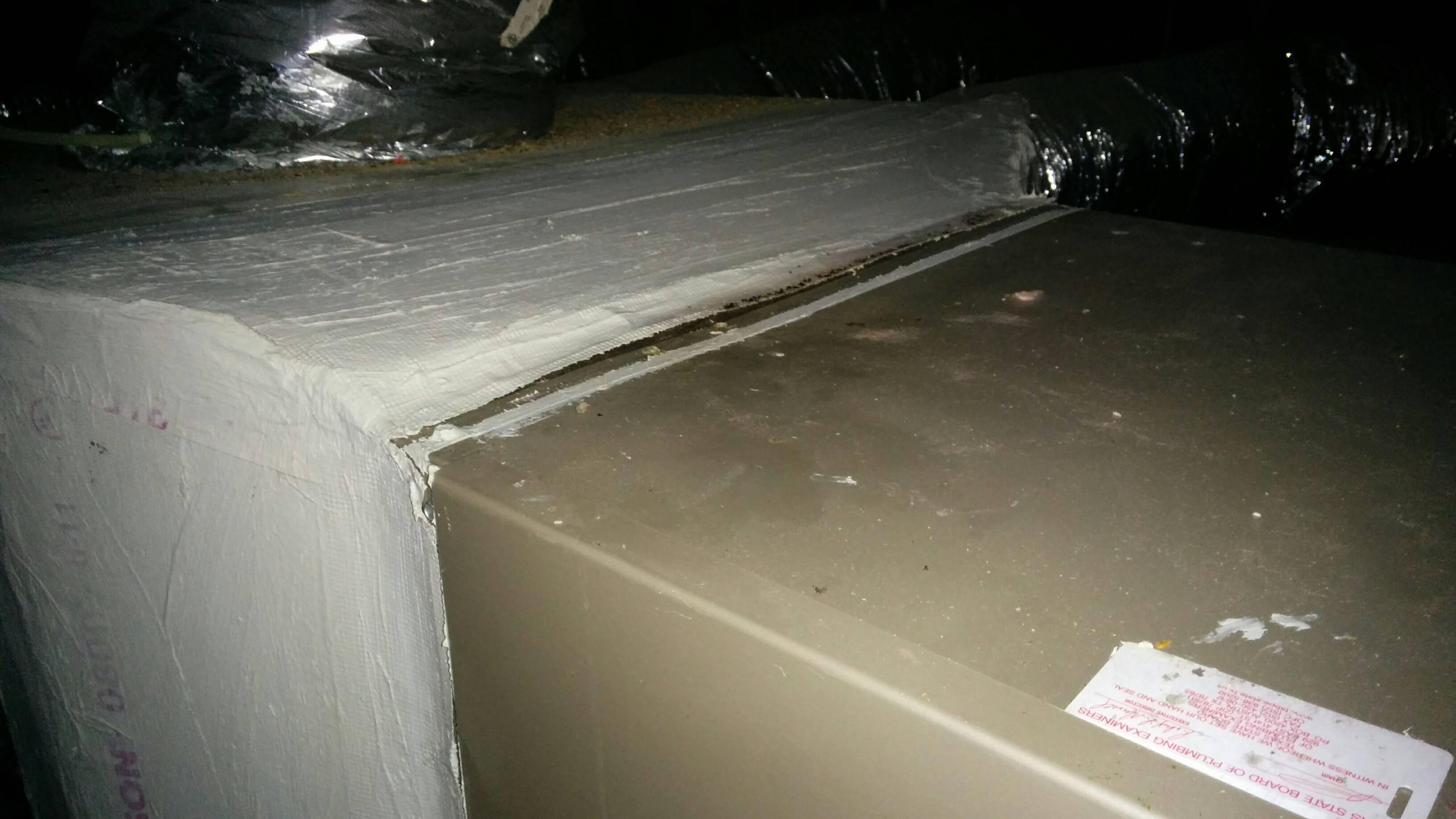 This was installed about 2 years ago, when my previous unit died. The installers placed it on some styrofoam blocks, which are themselves sitting on a sheet of plywood. However, at the far right-- the opposite end from the broken seal-- they missed the plywood; there the styrofoam blocks are sitting on top of blown-in insulation, which is pretty much worthless as a foundation. (See second picture.) However, this overhang of weight is so small-- it itself is just a styrofoam duct junction-- that I doubt that it caused the shift. (There are styrofoam blocks every 12 inches or so for the entire length of the unit.) 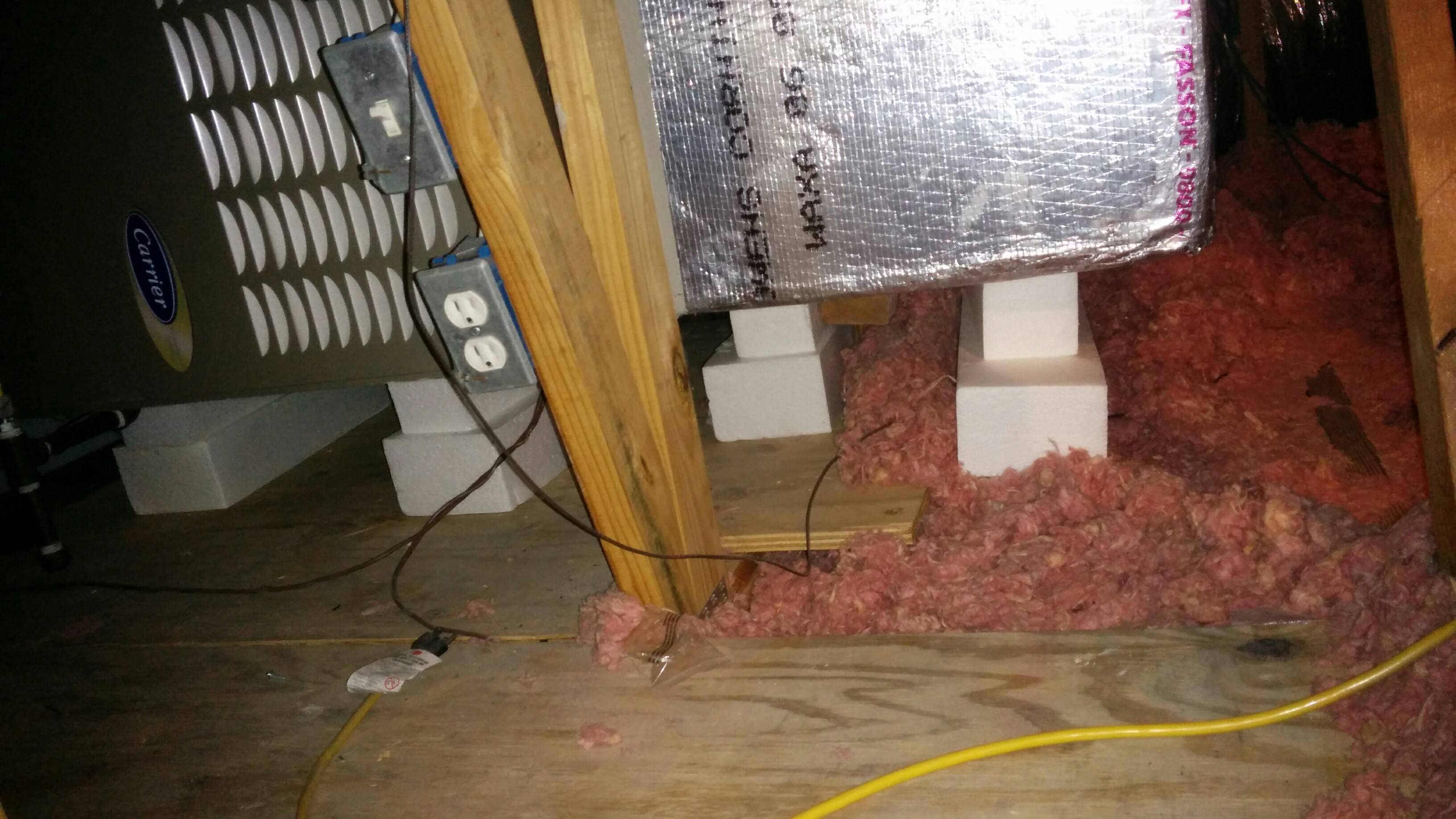 So, my question is: is this something that an inexperienced DIYer should tackle, or is there any reason why it would be best left to a professional? And if it is reasonable to DIY, what is that white material that failed? Should I buy more of it, or go with something else?

Yes, you can fix it. First, fix the support for the unit.

The white stuff is a duct sealant. You can find it at pretty much any big box store in the furnace aisle. However, rather than messing with that - after you fix the support of the duct work and get it re-aligned, you can seal the gap with aluminum tape. Not "duct" or "duck" tape - that's not actually meant for ducts. You want the aluminum foil tape. Simply apply to completely cover the gap and press down on the tape everywhere with a rubbing motion in order to ensure a good seal. 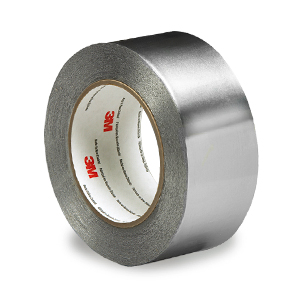 Not the answer you're looking for? Browse other questions tagged air-conditioning attic or ask your own question.

3
Why is there tar leaking into my attic?
2
Leaking portable air conditioner
3
AC unit won't turn on: both inside blower fan and outside fan unit won't turn on
7
Rust and ash in my AC/furnace - should I be concerned?
3
How do I get the insulation blower into the attic?
1
Air conditioner register leaking
0
HVAC / Furnace Evaporator unit in attic leaking cold air
0
Replace A/C Unit or add refrigerant?