How to bypass a clogged water softener?

We have bad water pressure in the house all of the sudden, and I spent about an hour tonight trying to locate the general vicinity of the problem, and it looks like it may be our water softener.

For the sake of this question, I'm going to use the following terminology:

These may not be correct plumbing terms, but they'll help make sense of my descriptions below.

Long story short, the first 2 branches off the trunk run to my 2 external hoses. They run at full pressure, so I know the trunk is good up until that point. Any water that doesn't go out to the hoses then gets routed through (I believe) a water softener. The first branch off of the line running through the water softener goes to a utility sink in my basement. This sink is experiencing bad water pressure (it starts out strong but quickly weakens to a thin trickling). So obviously the root problem exists between where my hoses branch off from the trunk, and where the utility sink line branches off from the line coming out of the water softener.

Now, the problem could be a blockage of some sort in the line itself, but I think it's much more likely that our old, lousy, good-for-nothin' softener has finally clogged or is 99% clogged, and is the source of our woes.

Below is a picture of the plumbing that sits just above our water softener: 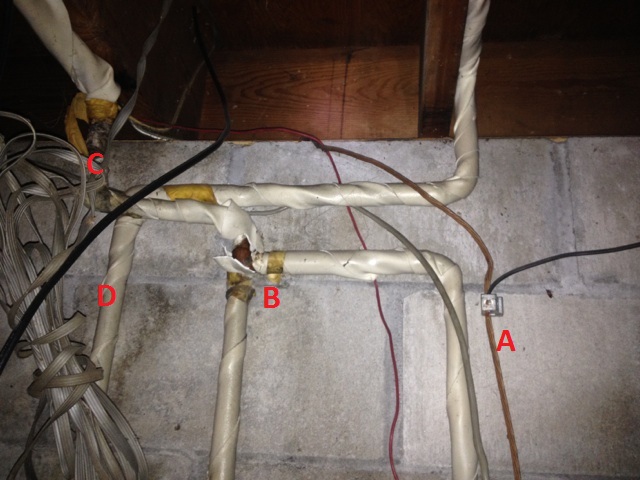 Now if we follow B down to the water softener: 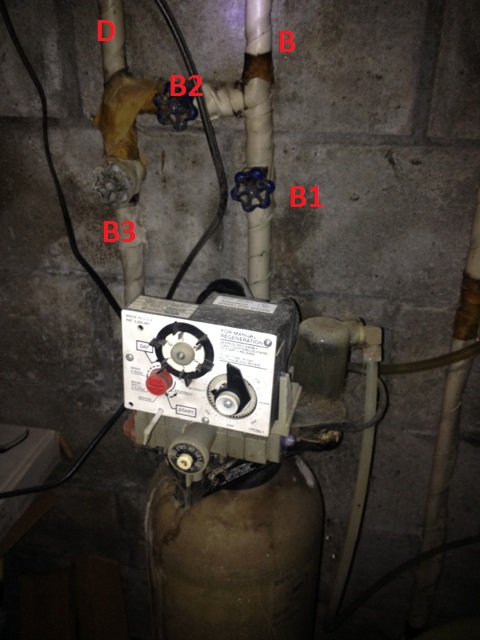 As you can see, the water comes down from B and, depending on which valve is open, can either go to B1 or B2. I believe B2 is a bypass line in case we want to run water without going through the softener. B1 carries water into the softener, and B3 is the line coming out of the softener, eventually going back up to D from the 1st picture above.

My theory is that, overnight, our old, shoddy softener kicked over and is now clogged so bad that its barely letting any water through it.

Question #1: Given all the info so far, how does my theory stack up? Any holes in it, or other caveats/gotchyas I should be considering?

At this point in time, I would like to just bypass my softener. We can live without soft water for a couple of months. We can't live without being able to shower upstairs.

To me, this implies that the water is already bypassing the softener, throwing my theory out the window! However, I'm obviously not a plumber, and perhaps in plumbing the valve turns from the orientation in which the water is flowing, or something weird like that. So perhaps my theory is right, and the valves just aren't operating the way I think they would! Confused yet? Me too!

The only other clue is that if I let the utility sink run for a few seconds (and remember, the utility sink is the first fixture/branch off the D line coming out of the softener) then the water softener comes alive for a few seconds as well; it makes some noise and then dies down, like it was doing something. So this also seems to indicate that my theory is correct, and that the valves are just positioned weird.

Question #2: How can I guarantee that the water is bypassing the softener?

Bonus Question: What in the heck is the B3 valve doing?!? Why would anyone want to run water through the water softener, thus softening it, and then prevent that soft water from flowing back into the rest of the house?!? Madness!

B2 is a bypass valve. B1 and B3 are so you can remove the water softener to replace it and still have water pressure in the house. B2 (only) or B1, B3 (only) should be open at any one time.

The system is not foolproof, since you can have valves open that should not be open at the same time, yet it's (last I knew) code in Massachusetts, which does not allow the use of a foolproof, or at least fool-resistant, bypass valve as usually supplied with new water softeners, and successfully used in 49 states that are not in thrall to antiquated plumbers.

Not the answer you're looking for? Browse other questions tagged water-pressure maintenance water-softener or ask your own question.