Where is my power going?

We just got an overly large (several hundred dollars over normal) electric bill from the city.

Being a bit of a diy I picked up an ammeter to to track down the reason. None of my circuits are clocking in over 2 amps in normal usage. I tried powering up everything in the house including all of the major appliances.

I did the math but I wasn't able to crack our normal $150 / month (calculated out using the local kilowatt hour pricing).

What the heck is going on? Anything more for me to do before calling the electrician?

The meter box is mounted to the side of the house, under a overhang.

When I used the ammeter I was working off the main hot line from the meter when I powered everything up.

We do have central air, howeverit was a lot cooler last month vs the same time last year. The usage shouldnt have spiked, at least that much.

The price per killowatt hour is comperable to last year as well.

We already tried (unsuccessfully) to lodge a complaint with the electric company.

The odd thing is the variance -$150 one month and near $1000 the next, with no noticible change in utilization patterns.

Are you sure your numbers are right? You say your kWh usage has about doubled, but your bill has increased 6x.

Anyway some utilities only do an actually meter read ever 2 or 3 months, then they estimate the bill for the other months. That can lead to extremely high bills if they've been underestimating and then they finally do an actual read and bill you for the extra that you've used. In theory the company is supposed to track your usage over time and get a good estimate but in my experience they can be wildly inaccurate. Your bill will tell you if the meter read is actual or estimated. Also note that some utilities increase rates in the summer when demand is high, so you may be suffering more if they just switched over to the summer rates.

If the problem is not just odd billing practices, you will need to dig a little deeper.

To help you narrow things down a little more, I would try to keep a log of your meter. E.g. try to write it down every day, or even twice a day to find out if your electric usage is constantly high or is intermittent. (Note that reading an old-fashioned dial meter is a little counter-intuitive, since each dial spins in opposite directions. See How to Read Your Electric Meter).

If you're really using 1000+ kWh extra each month, that's an average extra draw of 1.4 kW, which is pretty large. You should be able to see the meter spinning very quickly. Try shutting off circuits one by one to see what will slow the meter.

If you are willing to make a small intial investment, I would highly recommend buying an Efergy Elite / Hub.

This handy device clamps onto the mains line in your circuit breaker and measures power draw through inductance and sends it to a monitoring service over the internet for free. The device itself will run you $150 or more (if you have a 3-phase system you will usually need to buy an extra sensor because most kits only include 1-2 sensors).

Below is an actual live look at my own house: 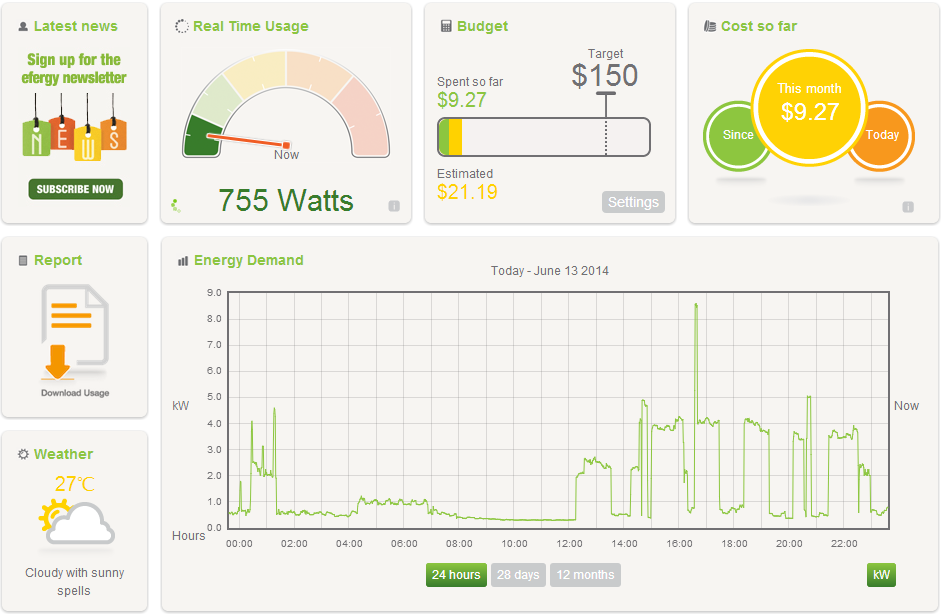 I have had the device long enough now to know that the large 9.0 kW spike at 4:30 PM is actually a combination of things - water heater, central AC and microwave. But if I did not know this, it would definitely be worth tracking down.

It is hard to be surprised by your bill at the end of the month when you can see your complete usage history from any web connected device anywhere in the world.

Thanks to everyone that responded. The insight has been tremendously useful.

While I am not 100 percent sure I believe I tracked down the culprit. Our drier had been taking longer to dry than normal the last couple months.

When I went to test it for usage I didnt verify that it was getting hot. It wasn't, which skewed my numbers. Turned out that I needed to replace the internal thermostats. A change in the duty cycle and length running of that device would explain a large shift in out bill, especially considering our lifestyle generates a lot of laundry.

In cases like this you do not call an electrician, you call the utility that billed you. They take high bill complaints very seriously, at least around here they do (NY State). They will do what is necessary to find out what the problem is. If it does happen to be on your end they'll tell you so.

If you have a well, you could have a water leak, dripping faucet, or wiring problem with your well pump. Well pumps generally run on a fairly short cycle, and infrequently, but a relatively small leak can cause the pump to run significantly more.

35
How best can I discover what is up with my electrical bill?

0
Why does my Central A/C Keeps Blowing its Fuse?
7
Why am I getting strange results when using a power meter to measure CFLs?
0
Identifying an unknown and intermittent source of electric power usage
0
No Power Going to my new GFCI
4
Potential Causes of Electric Meter Showing more power consumed than alternative measurement device
4
Microwave door interlock switch keeps failing
39
Why is my voltage dropping with load and why is current flowing on my ground wire?
24
How to find electric device(s) driving a high electric bill?
0
Half power keeps going out