How common are wet rooms in the US?

I have a half bath to which I'd like to add a shower. It is quite small; currently, the smallest shower pan I've found (32"x32") is too large to fit. I've considered turning the entire room into a 'wet room' like I've seen done in Europe, in which the entire room is the shower, and the toilet and other fixtures are all waterproof.

However, keeping resale values in mind, is this an accepted approach in US bathroom design?

I worked as a contractor for years and there is really only one rule... There is always a buyer, if you wait long enough.

Having said that, 'wet rooms' are not very common in the US at all. In the 100's of homes I've worked in I've only ever seen 3 of them. My advice here is two fold.

First: If it is worth it to you do it and don't think re-sale, you may lose money, but if it makes your life a lot better for the years that you live there it's probably worth it.

Second: If you decide to go this way, do it right! Make sure you take lots of photos to show people, have (and keep) all of the permits, and make it look perfect. People who would consider buying it even if they may not be familiar with a 'wet room' will run if it looks shoddy or sub-par.

I think if you do it right, and make it look upscale, it can even be a selling feature. As you described it, I was thinking so long as there are glass walls or something, it would probably look pretty good. First search on google found a picture of exactly that: 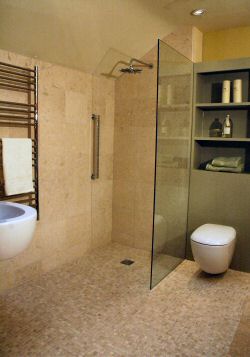 I totally agree with boxed-dinners, if you cheap out on it or don't do it properly, it'll scare people off. If someone looks at the room and thinks "Ok, I have to remodel that bathroom" then they're not going to be willing to pay as much.

Depending on the size of the space, it may end up being useful for a disabled person.

Firstly have a look at some caravans to see how a shower and toilet can be fitted into a small space.

Next if you don’t need wheel chair access you can put a bar at the door to stop the water coming out and/or make the floor slope more than normal to keep the water in.

You can get a lot smaller shower pans, they are normal in the UK.

Also consider using a pocket door to give yourself more space to work with.

Personally, I've never seen a house with one, and I've looked at a lot of houses. That said though, I still think it's a pretty interesting idea.

I was living in England for a while and the hospital housing I lived in we all had wetrooms. I am now back in the usa and we are renovating our home and I would love to add a wet room to the house. I think the bathroom that the OP is planning to use as a wet room is way too small. In London the bathroom was a larger than normal standard bath. the shower area was bigger than a tub and the toilet was right next to the shower area and we had a shower curtain to separate the shower from the toilet.

When we took showers the rest of the bathroom never got wet at all not even a little. The entire room floor was covered in a vinyl one piece that covered the shower walls and the entire floor.

I cant imagine having to dry up the sink and toilet every time i take a shower.

You would be better off not doing it; your space is just too small.

To answer the DIY bit about shower pans that won't fit --

They sell these kits that are basically styrofoam drain pans, that you can cut to the size you want, put down a waterproof membrane, and tile over. Search for 'styrofoam shower pan kit'.

As for how common they are, I can only remember seeing one modern (within the last 60 years?) home with wet rooms in the US, and it was more the scale that gregmac linked to, (and it happened to be my dad's house that he had built).

In his case, he had them built specifically for accessibility; they were on the first floor, where he was expecting that he might have my step-mother's mother move in. There was a slight dip as you entered (not enough to adversely affect a wheelchair, but enough to keep water from coming out), and there were hand-rails and a built-in-seat in the shower area.

However, I've been in some tiny wet rooms in Europe. The smallest (less than 5'x3'?) was in a hotel in Venice, as a retrofit -- as you entered the bathroom, there was a tiny sink to the left, and a small toilet to the right (a tankless model, or the tank was in the wall, I'm not sure how they do it in Italy); the door opened out, and there was barely space to stand in between the two. There was a rubber drainage grid on the floor, as the whole room itself was the shower. (the toilet paper roll was mounted higher up, out of the shower spray, and had a self-closing protective plastic cover). You might get some points for creativity, but I'd likely just advertise it as a half bath, and see if people notice that there's a set of controls on the wall and a shower head in the ceiling.

I've also seen some creative sink mounting, where if you have a tank on the toilet, the sink mounted just above it (but didn't come out so far that it came out past the front of the toilet tank).

Other things to consider are the doors -- I don't know why American homes always seem to have bathroom doors swing in, but if you can swing out, it'll feel much more spacious; if you have reasons you can't do that, try for a pocket door.

And the only other places I've seen wet rooms (other than older homes, with claw-foot tubs), are more industrial/commercial -- like one of the bars I used to go to. It was subtle -- there was a high ceiling with a shower head mounted almost touching it, and a sign next to it that said 'Budweiser, Rinse, Repeat'. People who had been regulars for years hadn't even noticed it. Hospitals, as Joan mentioned, they're pretty common, or hotels with a 'handicap accessible' room. Locker rooms in gyms or schools are another place.

And I agree with gregmac -- don't go cheap on it, or people might compare it to gas station bathrooms.

From the sounds of it, you have a very tiny room. If it were me, and I really wanted a full bath in there, I'd try to come up with some sort of crazy solution. Here's one idea: a moving panel that would protect the toilet during a shower, but would allow the toilet to be uncovered and used easily.

Toilet Use (door slides up):

The sliding panel would be on a track, moved by a motorized pulley. Here's what that would look like:

If designed correctly, the track could be completely concealed. No moving parts required other than the motorized pulley.

You could even make one wall of the shower into a retractable sink that rests within the shower when not in use, but would be pulled out when either was needed.

Unfortunately, this type of stuff would take a competent designer to pull off. Unless you have a great deal of confidence in your ability to solve problems, I would consider other options. That said, I think it can be done without being overwhelmingly tacky.

We loved using a wet room shower in Norway at several apartments once we figured out the advantages. All had heated tile or stone floors outside of the shower area, so any water dried very quickly (usually in less than 10 minutes). Plus,the bathroom floor always looked very clean!

Personal reaction is that these always feel a bit institutional to me -- they're just so clearly optimized for quickly sloshing a bucket of disinfectant over the whole thing. Unless the rest of the house has an "industrial modern (or postmodern?) style, I'd find it a bit jarring.

If you're thinking about its possible advantages for handicapped individuals, make very sure to check ergonomics and safety (anti-slip floor, grab rails, etc).

Not the answer you're looking for? Browse other questions tagged bathroom remodeling or ask your own question.

5
What are the standard sizes/clearances for bathroom elements?

5
How do I build a wet room for a wheelchair user?
3
How do I secure the shower valve without removing tile?
1
How to fix a ventilation pipe to the wall?
2
How can I install a switch to power a bathroom TV off safely and discreetly?
4
Need guidance for venting a new rough-in for basement bathroom
2
How to tile a "wet room" style bathroom?
1
Small bathroom - feasible layout?
1
Do I need to do anything after a bathroom flooding? How can I prevent it in future?
6
Bathroom Layout - Code Questions
2
Why are the vinyl floor tiles in my bathroom lifting up?