I helped my grandpa install a light fixture in his kitchen(he's in the process of remodeling) and noticed the wiring was a little weird. The wiring is going from the fixture to the switch which I thought, and a google search confirmed, is supposed to go like this: 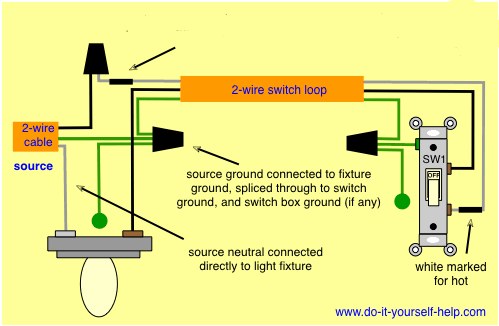 However, this is how the existing fixture was wired and how my grandpa insists I wire the new fixture: 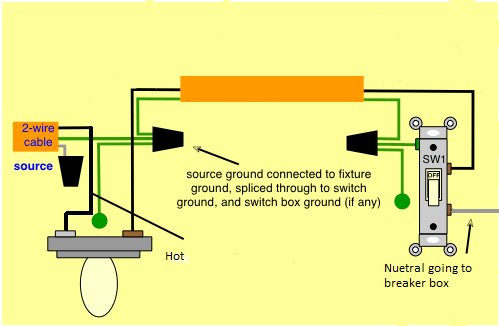 I'm not good with diagrams, but whats happening is the hot is coming from the breaker box(the neutral too, but it's ignored) going into the fan, and then out of the fan to the switch. The switch is then sent to neutral on the breaker box.

He's going to be due for an inspection once all the wiring is done and I'm concerned about this. The guy who did his wiring said he did all rooms like this. This area is under NEC 2005

What is being created is a "switched neutral," which is not proper and not allowed according to the NEC. It's possible, but highly unusual, to run the hot through the switch instead of the neutral and create a switched hot with a separate neutral path back to the breaker. That would be better than a switched hot, but may still be disallowed by NEC and I would never encourage anyone to wire a fixture that way either. The wiring shown in your first diagram, or wiring that runs the line to the switch first and switches the hot there, are the proper methods to wire a switched light.

There's a few issues with the second diagram.

First, you're switching the grounded (neutral) conductor. This is not allowed, since it would mean the fixture is always hot.

Second, you're not running all circuit conductors in the same cable. This is not allowed because it could result in phantom voltages, and undetected faults.

See this answer for more detail.

6
Can I run a ground wire of a single circuit to the panel outside the house?
0
How to work out which wire goes where when replacing light fixture

1
2-wire switch loop controlling 2 outlets - replacing with 3-wire to fix?
4
What could cause lights to come on full strength then dim?
1
Adjacent room light switch causing LED lights to display tiny bit of light
0
Light with 3 way switch does not work. Need help!
8
How should ground wires be handled when updating switch loops in an older home?
2
Existing 3 way switch light - add a light
0
2 light switches controlling one light fixture?
1
Trying to wire a new light fixture in the bathroom - what is going on with these wires?
2
How can I get this light fixture to light up?