How should I deal with an animal in the attic?

My tenants tell me that they hear an animal (possibly a raccoon) in the attic. This is an old (1880s) three story row house with a flat roof and a pretty low (2 ft average, maybe) attic. The house was totally renovated 10 years ago and I'm not very familiar with the attic situation or where the animal might have entered the attic.

I was told it sounds like at least a couple relatively large animals are scampering around the attic and occasionally they make whimpering growling noises.  They seem to be most active in the morning between 5 and 7 and I don't usually hear them during the day (maybe they are nocturnal or maybe I'm just not at home during the day).

How do I deal with the situation?

Edit: Alright, I betrayed the DIY principle and hired a professional. He found squirrel droppings and no proof of raccoons or any other animal. He found two wholes and filled them with metal screens attached with screws and Liquid Nails. He also put a trap and is going to check it in a few days. Cost was rather steep: $395 total. Next time I may do this myself. Although, honestly it was not an easy job for him especially in one of the corners where space was tight. Also, the dust, droppings and fiberglass insulation makes this job unpleasant.

Not knowing where the house is limits the advice. However since it has a flat roof, I'm going to assume it's not anywhere where it snows a lot.

You need to get a professional for several reasons.

Most importantly, if the pro gets rabies, it's not your problem.

If they are only getting in from one spot, you can get a one-way door like this: 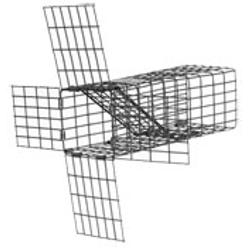 They can get out of the attic, but they won't be able to get back in.

Raccoon mating season is roughly Jan-Apr, so there shouldn't be any babies up there yet.

I don't know where you are located, but here in Massachusetts it is illegal for anyone to live-trap a problem animal and move it for release on other public or private property. Unless you're able to prevent the raccoons from entering (before they have babies up there, otherwise they will find a way back in), you would have to capture it and either release it on site or have it killed. I think you as the property owner are allowed to do anything a licensed problem animal control (PAC) agent is allowed to do.

Also, raccoon hunting season ends January 31, but shooting them inside the attic is perhaps out of the question. :)

I'd personally start by calling the local animal control office (it might be part of the local health department, depending on how your town/county/city/whatever government is organized)

They'd be able to tell you what's likely to be looking for new homes at this time of year in your area that fits the activity pattern, and what the laws are for trapping/killing/etc.

I had this problem in my house in Georgia with a number of animals, to solve I put my cat in the attic for a few hours a day for a week or so (usually when I was up there anyway). The cat never killed anything, (to my knowledge) but the scent of the cat drove the animals out for good. I have found this solution to be simple, cheap, and effective. It also works with dogs.

We had a raccoon in the attic and hired a pest company to remove it. He sealed 3 entries and caged the 4th with a one way door. We got lucky the racoon didn't have a family in our attic. What they do in this case is get the adults out with the one way door and then go into the attic to fetch the babies. The important thing is to put the babies at the last exit point used by the racoon, if that means beside the one way door on the roof then that is what must be done.. if the raccoon cannot reunite with its babies it will tear your roof boards off to get back in. When it comes to roof work, I opt for the a pro.

Not the answer you're looking for? Browse other questions tagged attic pest-control or ask your own question.

2
Securing our roof against possums

1
Can I reuse a live rodent trap?
3
Do I still have a mouse problem?
5
Squirrel or rat; and do I trap first or exclude first?
1
How to deal with the trapped air in a loft attic?
0
How do I balance an attic fan?
2
Should I use reflective insulation over other kinds of attic insulation?
3
What is this animal in my loft?
3
Could these white fluffy spots on the wood in my attic be be mold?
5
What's the most effective way to further reduce attic temperatures in hot weather?