Today, I got a new toaster oven. When it's heating, my kitchen lights (plugged into an adjacent outlet) flicker/pulse.

What can I do to reduce the flickering?

If I get a power conditioner, can I put it on the power supply to the toaster oven, so that the appliance doesn't impact any other outlets in the household? It looks like power conditioners are usually intended to be used on the devices you want to shield, rather than on the device that's causing the problem; does it work both ways?

The new toaster oven doesn't exhibit the flickering problem if I'm toasting; only if it's heating on "bake" mode (both when the convection fan is on and off). The lights dim when I turn the toaster oven on any mode, but on "toast" they don't flicker; they just dim and stay dim until the toaster oven shuts off.

The flickering happens around 8 Hz (but it's hard to tell for sure). I put a Kill-a-Watt meter on the lights (which were turned on), and got the following readings, but it only updates the display once per second:

The light fixture is mounted above the counter, not the main kitchen light fixture; it has three sockets rated for 50W each and a single on/off power switch (no dimmer control). I don't know what kind of bulbs they contain but I think they're incandescent: 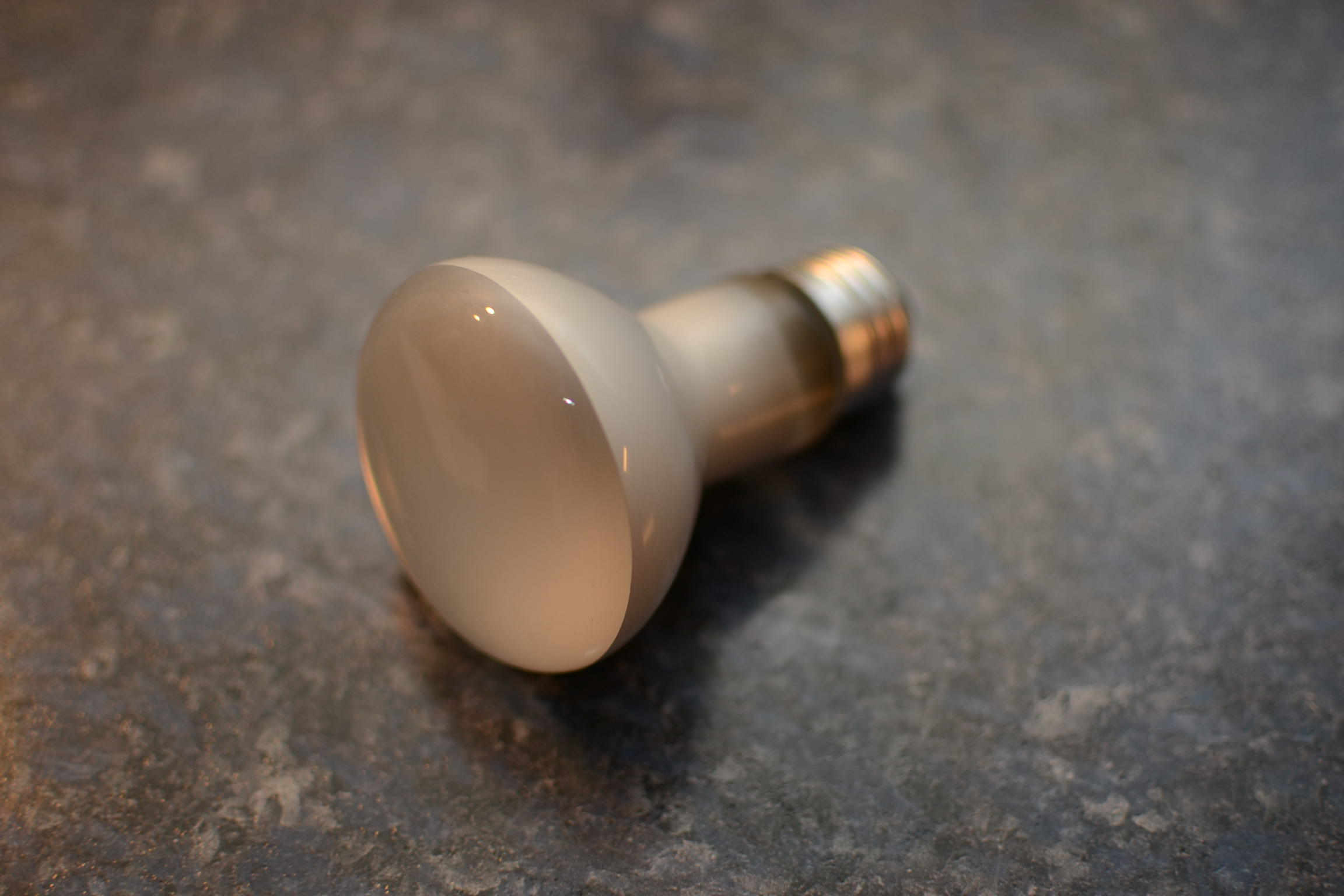 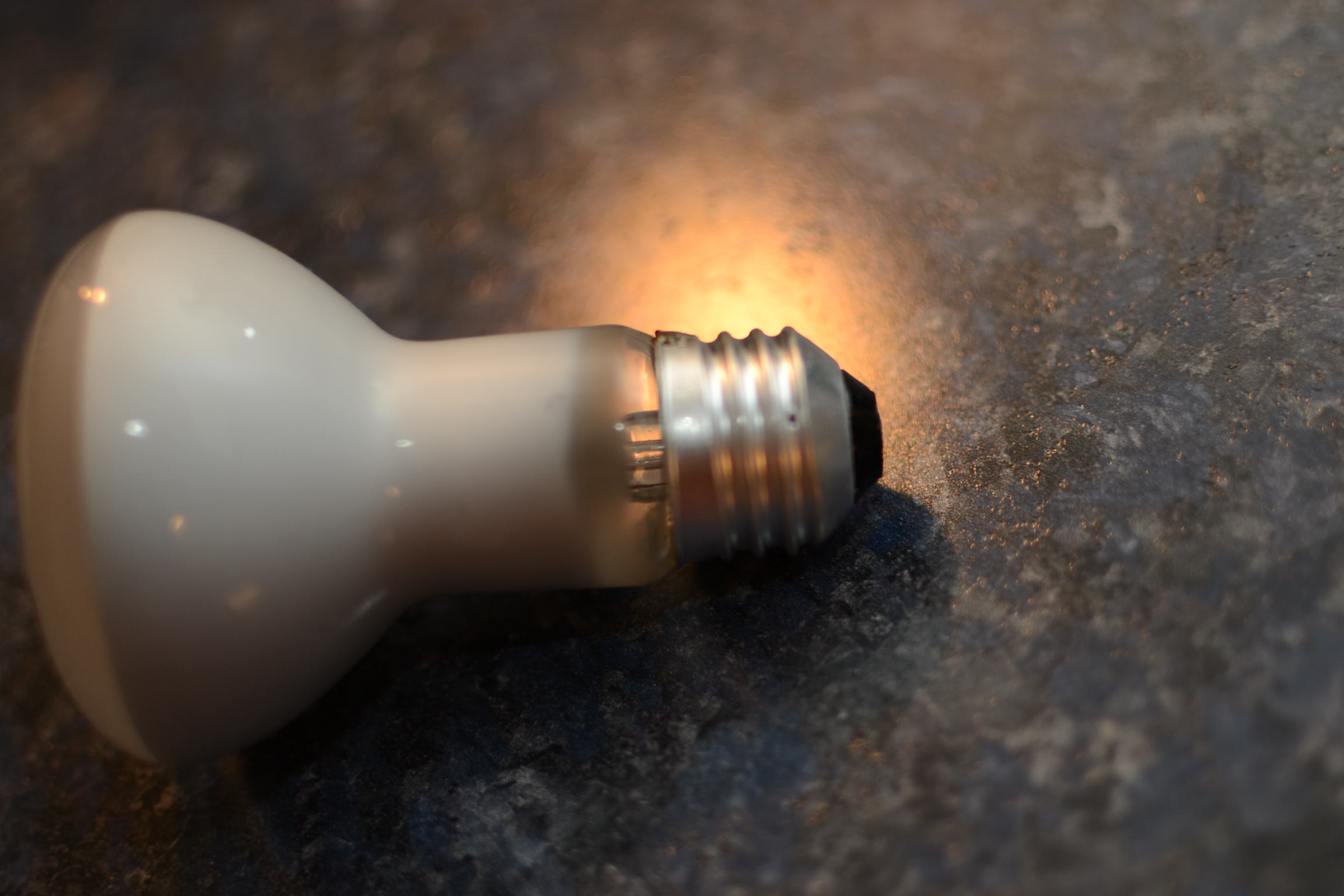 It appears that no other lights are affected (ie. the overhead lights, the range hood light, or a fluorescent fixture above the sink).

I guess the toaster oven is doing some PWM thing when it's on bake? I don't know for sure, but the flickering is very distracting.

This is an old house (100 years this year, I think) but the wiring was updated within the last decade, I believe. I'm renting so it's unfeasible for me to do anything about the wiring and setup (but I suppose I could run extension cords).

The problem isn't within the toaster, and adding a "power conditioner" wouldn't help. It's simply drawing a lot of power from the outlet, and the wiring impedance between the outlet and the distribution panel is causing the voltage at the outlet to drop a bit.

In general, the lighting circuits and the countertop appliance circuits should be on separate breakers to begin with, so that an appliance fault won't leave you in the dark with a potentially dangerous situation (hot and/or spinning objects).

You should try to work out which outlets in your kitchen are on which circuits, and operate the toaster on a separate circuit from the one your lights are plugged into.

I suggest you check the power cord of the toaster over for heat (cord, plug, wall outlet). I would also suggest you check the circuit panel for heat using some kind of remote sensing device like an infrared thermometer gun (or in worst-case visually examining for signs of excessive heat like melting of insulation).

I had a similar problem and it turned out that the connection at the circuit panel wasn't correct. Turning on a high-impedance appliance caused arcing in the circuit breaker and actually melted the insulation on the wire.

The arcing caused the flickering in the lights.

In Canada and the US, kitchen outlets are wired so that the top plugs on adjacent outlets are circuit A, and the bottom plugs are circuit B. Yes, it's weird (and a royal pain for the people actually doing the wiring) but that explains why the top and bottom circuits are not behaving the same.

The toaster oven draws a lot of power, but it should not dim a simple lighting circuit that much. You may have a serious electrical problem, and unless you are confident enough to do your own work, call an electrician to pull the outlets and the breaker. I won't supply instructions - if you don't already know how to do this, call someone. Do this soon, like today, or at least before your house burns down.

I also recently replaced a toaster oven with a Breville Smart Oven, and the lights flicker only when it is in a mode which uses the convection fan. I added ferrite filters to the power line, which made the problem audible. This leads me to believe that the convection fan is driven with pulse width modulation (PWM), and that Breville's implementation of it essentially turns the toaster into a transmitter, using the power line as an antenna. The only real solution to end the flickering (which is dramatically more noticable with LED lights) is to get a different brand of toaster oven.

I suggest you have an electrician install some dedicated wiring for your kitchen. You may be creating a fire hazard pulling that kind of current through old wiring.

6
Why would an iMac computer cause lights on a circuit to flicker when it goes into sleep mode?
2
Why do my pot lights flicker randomly when not at full brightness?
2
How do I troubleshoot my electric oven?
2
Flickering lights
2
LG oven turning off and flashing "PF"
-1
Brand new oven won't heat
20
My room lights' brightness pulses when I turn on my toaster oven
11
Why do LED Lights Flicker on Low Dimmer Setting
3
LIghts flickering across multiple circuits
1
Occasional light flicker, how to find source of issue