How to identify the purpose of this switch?

Does anyone have thoughts as to what this switch could control? How can I identify what the switch is used for?

A picture of the switch box: 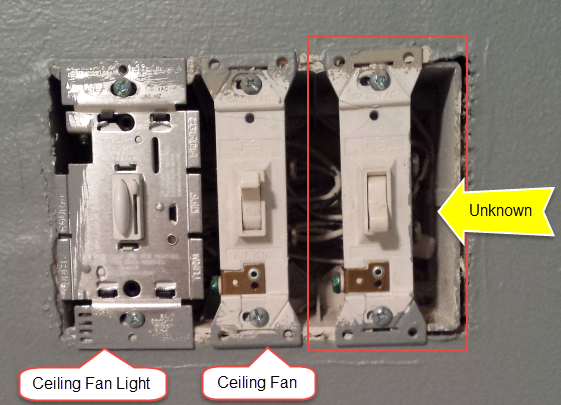 UPDATE: As @Edwin guessed, this switch was previously used for two switched electrical receptacles. One of the switched outlets had been replaced since the house was built and the fin use to make the top outlet switched had not been removed. This caused the outlet to have power regardless of the switch position. I'm guessing this was done when the ceiling fan light was installed and the homeowner no longer wanted the switched outlets. I've replaced the receptacle and now the switch works--switching the top outlet on two receptacles. Mystery solved! Thanks go to everyone that had a suggestion and offered advice.

If you have a voltage tester, test to see if you have power to both the top and bottom terminals of the switch when the switch is in the off position. If you do, it's likely the installer just forgot to take a fin off one or more of the outlets.

There is probably a way to test for this without any tools, but I am stuck at the moment. Maybe someone else will have a suggestion.

If you have reason to believe that the installer forgot to remove one or more duplex receptacle fins, you have to get in the outlet boxes to fix the problem. Take off the covers to the outlets in the room. If you're lucky, there will be both red and black wires connected to the receptacle(s) with switched power. These are the receptacles where the fin should be removed.

If there is only black wires and no red wires, your next step is to find out how the installer connected the outlets to one another another. He could have used pigtails, using wire nuts to connect the "line" (wires coming into the outlet box) to the "load" (wires going to the next outlet). Or he could have daisy chained the outlets together, meaning both the the line and the load load is connected directly to the receptacle. If you find that the installer used pigtails, you can just look for the receptacles where both the top and bottom outlets are wired. This receptacle likely has your switched outlet. If they are daisy chained, you have your work cut out for you. I can't think of any other way than to start taking apart the outlets and testing the wires one by one.

If you find a receptacle that needs the fin removed, and there is a shared neutral, only take the hot fin off. If there is a neutral for both outlets, then take both fins off.

Safety note: Don't assume that all the wires in one box are of the same circuit. Test ALL the wires in the box before you go in there with your hands.

Other than testing outlets, like you've done, the simplest way to determine what that switch connects to is to follow the wires. In 99% of cases, the wiring goes up into the ceiling, rarely does it go down into the floor; in some cases you'll see it go horizontal through the wall, but only if the destination is an outlet that is very close to the switch, such as an outlet directly below the switch. Assuming you have attic access, climb up above the switch. You'll see a 3 wire cable coming in from the breaker. You'll also see two 2-wire cables or a 3-wire with ground (4 wire) cable running to your ceiling fan. Once you've identified those, the cable for your odd switch should stand out like a sore thumb. Just follow it to where it goes.

My guess is that it's part of a 3-way for a hallway light. If that's the case, you'll see one of two things. 1: you'll have a single 3-wire cable that connects to another switch, or 2: you'll have two cables, one coming in from another switch, and the other connecting to your load (the light).

You might also hook up a multimeter to the switch and see if it even has power. It might have been for a fixture or device that was removed by the previous owner and they left a disconnected switch, rather than leave an empty spot in your gang box.

12
How can I trace cable through floors and walls?
1
Is this outlet wiring correct?

1
Why does this switch throw the breaker when turned on?
1
What is this single pole switch to empty ceiling box blows breaker when switched on
1
Wiring a Ceiling-fan and switch while disconnecting an outlet from the switch
1
Wall switch connections for a ceiling fan and light
2
Electrical: Wiring a dimmer switch in a circuit with fixture, outlet, another switch powering 2 other fixtures
0
Why is there a white wire connected to multiple black wires in my light box?
1
Switched outlet needs to be on for an exterior light switch to work; how can I fix this?