Are these joists deep enough for the joist spacing / beam spacing I am planning on my deck?

I'm building a deck in the garden, have planned, purchased and started building the deck. I've been laying out some joists on the support beams (wider timbers bolted onto the posts) that I've temporarily put in position, and I'm slightly worried that the joists I have purchased are not going to be strong enough. They feel firm enough when laid out as a test, I just don't want problems a couple of months / years down the line.

On the not so worrying side:

The timbers were listed at the merchant as joists. They don't flex significantly when I stand on a single joist and jump up and down a bit, and when I've laid a couple of decks across as pictured and stand on the deck, it doesn't feel springy.

I have enough timbers to lay the joists with 220mm centres, which seems pretty close.

The deck board I have is quite good quality - 32mm thickness.

The only thing that is really worrying me is that they 'look' a bit on the thin side, and everything I've looked up online seems to reference minimum 6 inch joist depths. 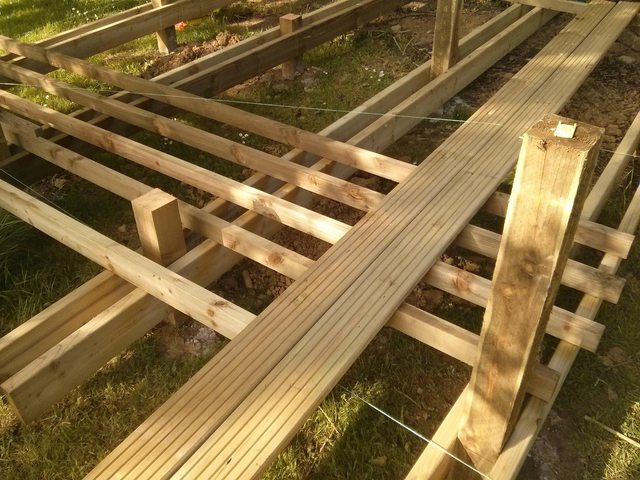 I have read that "In general terms, joists spaced 16 inches on centre can span 1.5 times in feet their depth in inches". If this is true, they should be able to span about 1300mm, I'm only attempting 900mm. I hope that's right!

joists decking
Share
Improve this question
edited May 16 '14 at 1:03

If the dimension measurement is accurate, the joists wouldn't get past my local inspector (around here it's 2x6 minimum for deck joists), but even at 12" (300mm) centers you could probably park a small car on it with 900mm spans.

Not the answer you're looking for? Browse other questions tagged joists decking or ask your own question.

8
Floor joists connection to eaves
2
How can I build a temporary support for rafters?
5
Free-standing deck joist layout
0
Different joist spacing of extended deck
1
Can I frame over an existing deck with a new deck to raise the level?
1
Appropriate fixing to lay joists on top of binders
1
Is using a single hanger plus a framing angle on a double member sufficient